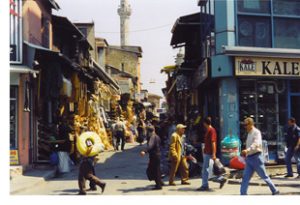 Perched at the convergence of Europe and Asia, bridging cultures and histories, Istanbul keeps the propulsive rhythm of a bustling metropolis. Once the centrepiece to an empire spreading from Iraq to Algeria, ancient Constantinople remains a place where the markets are always busy, the streets full of life, and the air a cacophony of horns, touts and the call to prayer.

The esteemed Topkapi Palace provides an unrivalled window into the lifestyles of the Ottoman sultans. Constructed by Mehmet II, it became the sultans’ residence under Suleyman, until the nineteenth century, when sultans built lavish European-inspired palaces along the Bosphorus.

Highlights of any palace visit, the Harem and Treasury require separate admissions, and are best seen early to avoid lineups. A labyrinth of courtyards and gardens, Topkapi’s Harem features a terraced pool, and some 300 rooms. A small number are open for viewing, astounding with their tile and gilt work.

Often depicted as a den of debauchery, conduct in the sultan’s private residence was steeped tradition. Shared by the sultan’s four wives, their children, and numerous concubines, the first wife to give birth to a son became the sultan’s ‘first lady.’

The nearby “Underground Palace,” is an ornate sixth century cistern. Containing just enough water for effect, the reservoir offers an intriguing light show, set to the gentle lilt of pipe music, following you along a boardwalk, winding amongst the 336 columns.

One column, featuring a design similar to tadpoles, captures my attention. Encouraging you to place your finger into a shoulder height hole, locals delight as looks of dread wash over tourists. Just beyond, two giant Medusa’s head pedestals stare eerily outward, their significance unestablished.

The decapitated Serpent Column (erected to celebrate Persia’s defeat) and the naked and pock-marked limestone Colossus, bear the scars of the hippodrome’s violent history. Only the Egyptian obelisk is unscathed, featuring glyphs dating back 3500 years. 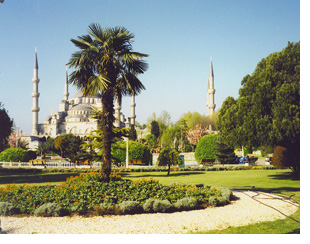 The adjacent Sultan Ahmet or ‘Blue’ Mosque ranks among the world’s most famous religious shrines. The only mosque featuring six minarets, worshiper Aydin explains the legend behind this uniqueness. “The Sultan instructed his architect to build the minarets of gold. However, recognizing the prohibitive cost, the architect switched the words for gold (altin) and six (alti).”

The ‘blue’ nickname derives from the ornate flowered tiles of the mosque’s upper gallery, and the predominance of blue in its painted ornaments. Bronze gilt covers much of the interior and woodwork is encrusted with ivory and mother of pearl. The mosque appears particularly beautiful at night, its domes and minarets aglow, the surrounding gardens bathed in moonlight.

Converted to a mosque as Islam swept the Middle East, St. Sophia is Istanbul’s oldest church. Unique in retaining lavish details from both faiths, Christian mosaics coexist with an elaborate Islamic mihrab and minbar.

Eight giant discs bearing the holy names of Allah, Mohammed, the four Caliphs and Mohammed’s grandchildren hang from the ceiling. Despite Islamic traditions against depictions of God, Sophia’s entry boasts a gold mosaic of Christ in his mother’s arms and Christian murals appear in the church’s upper galleries. Covered over during the church’s conversion, they were revealed as restoration commenced.

The Valens Aqueduct and Sulimaniye Mosque entail a brief tram ride to Istanbul University. Emerging at the leafy Beyazit Mosque grounds, broad walkways lead towards the university and its imposing southern gate.

The impression is almost of entering a castle, through the pigeon-filled courtyard. Serving as the Ministry of War in the Ottoman era, Istanbul’s university is one of the oldest in the world, established in 1453.

Sulimaniye Mosque is widely considered the most fabulous of Istanbul’s mosques. The treed outer courtyard, surrounds an inner atrium of twenty-eight mini domes, whose marble and granite columns originally formed the Hippodrome.

The perimeter is marked by four minarets, each with ten balconies, symbolizing Sulimaniye’s status as the fourth sultan after the conquest of Istanbul, and tenth ruler of the Ottoman empire.

A magnificent fete of engineering, Sulimaniye’s central dome spans nearly thirty metres, supported by four massive piers. Acoustics were refined to the angles inside the domes and pipes running beneath the floor, carry the imam’s prayers to the furthest corners of the building. 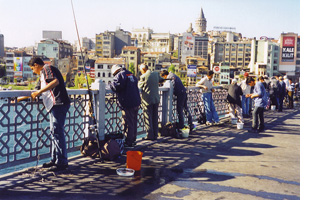 Istanbul’s charm is rooted in its blending of modernity with relics centuries old. Spanning Ataturk Boulevard, the Valens Aqueduct, stretches nearly a kilometre, once providing water to the imperial palaces. Today the two-storey aqueduct appears like a giant toll booth, several lanes of traffic passing beneath its arches.

After a day of traipsing Istanbul’s historic sites, a dinner cruise on the Bosphorus provides a fine way to wind down. Numerous options are available, from municipal ferries to chartered yachts. Major hotels often have their own vessels, or reserve spaces with tours.

Enjoying your meal against a light breeze, there is no greater tranquility than sailing into Istanbul’s sunset.