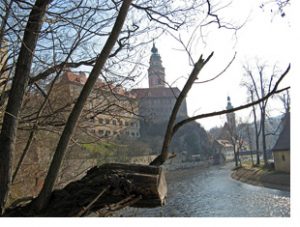 The child in all of us yearns for a magical land where we can hide away from all our cares – places like Camelot, or Brigadoon, or Shangri-La., or Ceský Krumlov.

Ceský Krumlov? Graced with a name that to the North American ear sounds like a suppressed sneeze, this medieval town in the South Bohemian area of the Czech Republic often catches the first-time visitor by surprise, arousing a feeling of wondrous awe.

Our tour bus had arrived from Prague long after dark and, filled to the gunwales with rich Czech food that consisted mainly of dumplings, dumplings and more dumplings, I somnabulated through the hotel check-in, handing over my passport and signing the registration card by rote.

Thirty seconds after the inevitable tussle with the plastic passkey to my room, I was sound asleep, a trail of travel-weary clothing leading from the doorway to the duvet-covered bed.

Next morning, I stepped out into the large square in front of my hotel – and almost hyperventilated from an intake of breath that started at my toes.

I was standing in one of the most beautiful spots I have ever encountered. Ceský (pronounced Chess-Key) Krumlov was everything the guidebook had promised, and then some.

For starters, the skyline is dominated by a fairytale castle right out of Walt Disney’s boyhood dreams. And the town itself is situated inside the horseshoe shape of a double bend in the meandering Vltava River.

No matter which way you turn, you’re not much more than a stone’s throw away from the lulling sounds of slow-moving water. No wonder I’d slept so well the night before.

The bend of the river is partly responsible for the town’s name. Krumlov stems from the German phrase “Krumme Aue”, which translates as “crooked meadow”.

Ceský (meaning Bohemian) was tacked onto the name to differentiate the town from its counterpart, Moravský (Moravian) Krumlov, located in the southeastern part of the country. 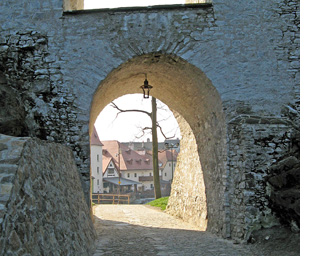 As I started strolling along winding, narrow cobblestone streets that have swallowed up townsfolk and visitors alike for more than 800 years, I continued to marvel at the picturesque sights that greeted me around every corner.

Spared the devastation of the myriad wars that have flared up every few decades in this neck of the woods just north of the German-Austrian border, Ceský Krumlov seems suspended in time.

The town in fact has such historical significance that UNESCO declared it a World Heritage Site in 1992, ensuring that no rapacious development will turn it into a condo and casino wasteland nicknamed “Vegas on the Vltava.”

Happily, however, the good burghers of Ceský Krumlov recognized the importance of orchestrated tourism as the old ways died off. 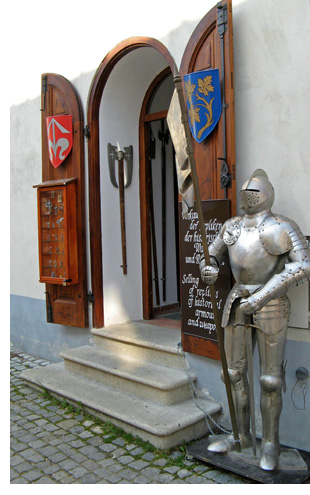 They allowed the innards of many of these heritage buildings to be renovated into hotels with modern-day facilities, charming cafés and pubs, elegant restaurants and quaint little shops that sell everything from suits of armour to wooden toys to profuse offerings of garnet and amber jewellery.

There are so many fascinating buildings in the Inner Town that it would take several days to take them all in. High on my list, not surprisingly, is the 400-year-old Eggenberg Brewery.

This complex of huge red brick and plaster buildings features an enormous beer hall where typical Czech cuisine (did I hear someone say dumplings?) can be washed down with one or more of the five types of beer produced on the premises.

In fact you’ll need a bracing flagon or two of Eggenberg Pilsener to numb your delicate senses as your next stop takes in the massive St.Vitus Cathedral.

During a guided tour you’ll hear how this patron saint of Bohemia was boiled in oil by some rather nasty folks and how his writhing in agony later became the secular name for chorea, a disease of the nervous system – aka St. Vitus’ Dance.

On visiting a refurbished warehouse, admirers of Vincent Van Gogh will discern similarities between the tortured Dutch artist and Egon Schiele whose talents attracted the attention and patronage of Gustav Klimt, a prominent member of Vienna’s Art Nouveau movement.

Schiele, born in Tulln, Austria in 1890, spent much of his time painting – and raising the ire of the local citizens – in Ceský Krumlov, his mother’s birthplace.

Schiele was finally run out of town after the locals got fed up with his penchant for living with a mistress and enticing innocent young girls to pose as his nude models. Like Van Gogh, Schiele died at a relatively young age – although not of a self-inflicted gunshot wound but in the Spanish Flu epidemic of 1918.

And, like Van Gogh, Schiele’s talents were little appreciated until after his death. Today, the Egon Schiele Art Centrum features a permanent exhibition of his work as well as short-term showings of other 20th century artists.

Saving the best for last, I made the climb up to the Ceský Krumlov Chateau, said to be the largest castle in the country outside of Prague.

This huge complex features a magnificent ballroom haunted by the ghosts of formally attired revellers of centuries past as well as a baroque theatre with a revolving auditorium where international music festivals are held annually.

As happens with many of the really impressive vacation spots in the world, the first visit to Ceský Krumlov leaves you with the feeling that you’ve only scratched the surface. As my tour bus began its reluctant trek back to reality, I found myself vowing to return to spend a week or more in this enchanting town where time truly does stand still.

Photos by Tom Douglas:
1: The Vitava River meanders through the Medieval city of Cesky Kromluv
2: There’s another breath-taking site around every corner of the city
3: If you have room, you can bring home a suit of armour