It is a long way from the St. Lawrence to the Fraser River n’est pas?

History is the foundation upon which the present exists and the future unfolds. Barely visible and little known are the roots of French Canada in the Province of British Columbia in general and the Vancouver Lower Mainland area in particular. Yet, they are here and they are deep.

In May 1808 Simon Fraser, of the North West Fur Trade Company, departed Fort George, today’s Prince George, on the river destined to carry his name, in hopes it would prove a navigable route to the Pacific.

The journey, which proved the waterway ill suited to the fur trade at the time, made them the first white men to see the Fraser Valley. The Nor Westers would not return but the voyageurs would, one in particular.

Sixteen years later, fearing the Oregon Territory would be ceded to the United States, the Hudson Bay Company (which took over the Nor Westers in 1821) sent an expedition north to check the Fraser Valley as a possible site for a post.

Amongst them were Baptiste Proveau who had paddled with Simon Fraser those many years before, Micheal Laframbois and Francis Noel Annance. Three years later the construction of Fort Langley began.

As at other posts, French Canadians provided the bulk of the population and the working language. Metis, Louis Langley, became the first child born at the post. In 1839 the fort was moved several miles upstream to present day Fort Langley. Here Etienne Pepin is said to have been the first man to plow the soil of Langley Prairie. 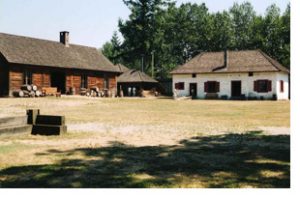 The restored fort, a National Historic Park, reflects the 1850’s period complete with the only remaining original building, the storehouse, which was rebuilt after the fort burned down in 1840.
Interpretive guides, in period costume, are spread about the various buildings including the blacksmith shop, cooperage, big house, and servants quarters offering detailed information about life and times at the fort. Theatre venues, a fur press, bateau, bake oven, bastions and interactive gold panning sites compliment the sense of realism.

The modern visitor centre, provides further information and a theatre presentation on the history of the fort. The nearby town of Fort Langley, a destination in its own right, offers shopping, dining and relaxing at bistros and ice cream outlets. The cairn-marked original fort site may be accessed by road or by the riverside Fort to Fort Trail.

From here in 1848 Jason Ovid Allard was dispatched upriver to found posts at Hope and Yale little knowing these communities would gain their fame in the 1858 gold rush which spelled the death knell of fur trade dominance and, eventually, Fort Langley.
But the French influence was not to disappear.

In Victoria, on Vancouver Island, Jesuit Bishop Demers began the first newspaper, Le Courier, and the Sisters of St. Anne from Quebec opened the first schools. The church was no less active in the Fraser Valley as St. Mary’s Mission arose under the hand of the Oblate Fathers, an order largely drawn from continental Francophones. And where the church went throughout B.C. it drew upon the legacy of the French Canadian voyageurs.

The population tide moved relentlessly against the French influence, especially in the burgeoning lower Fraser Valley, but not without an important interruption.

In 1909 prospering Fraser Mills sent night watchman Theodore Thereaux to Quebec with an Oblate Father to recruit experienced workers. Recruits were offered free passage by CPR, better wages, cheap accommodation in cottages which they could purchase, 1/2 acre lots and lumber to build their own homes. And, a church with a French speaking cure’. (priest).

On Sept. 27, 1909, 250 French Canadians arrived. The following year the two agents returned with another 166. Maillardville, the largest French Canadian enclave in B.C., was born.

For many years the community, huddled around its central church, Notre Dame de 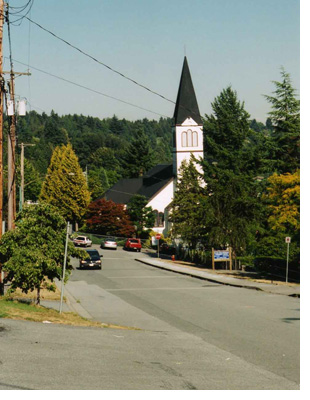 Lourdes, focused upon the mill and benefitted from its isolation in maintaining its unique French Canadian culture. It was not until the tidal swell of greater Vancouver pushed deeper inland that the culture integrity of the community began to be threatened. Yet the community persists and is experiencing a proud rebirth.

The old homes and streets still converge around Notre Dame de Lourdes at Laval Carre’ where Mass continues to be offered in French, street names recall the French heritage and Foyer Maillardville, the seniors home, rises high above it all. And it is a dynamic community.

Every year, in March, the two day Festival du Bois celebrates French Canadian culture and numerous associations and groups have banded together under the umbrella of the Societe Francophone de Maillardville to promote and maintain French language and culture in the community. 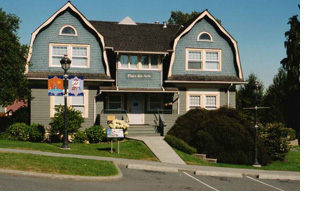 The National Historic Park of Fort Langley, lying next to the modern community, is easily reached by car off the 401 highway east of the Port Mann Bridge.

Maillardville spreads north of Brunette Avenue east of Blue Mountain Road in Coquitlam just off the 401.

Neither is far from the Fraser River which first met the voyageurs in song and regalia plying its waters in adventure almost 200 years ago.

About the photos:
1: The whitewashed storehouse at the Fort. The only remaining original building.
2: Notre Dame de Lourdes in the centre of the old town of Maillardville..
3: The Place des Arts, a focal point in the town.