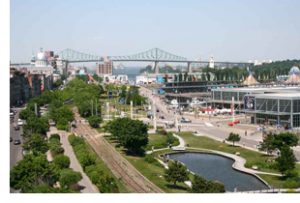 My hubby Rick and I recently join the curious throng and probe this cosmopolitan city’s earliest days.

At Musee Pointe-a-Calliere’s theatre, a multi-media journey through six centuries kicks off our exploration of Montreal’s birthplace between the St. Lawrence and Little St. Pierre Rivers.

A stroll through Fort Ville-Marie’s subterranean remains reveals traces of the early palisade, first Catholic cemetery, base of the old customs square…even experiencing the sights and sounds of a lively market day, circa 1750.

Nearby we encounter Cathédrale Marie-Reine-du-Monde whose unexpected grandeur resembles Saint Peter’s in Rome. But here, patron saints of parishes grace the facade rather than apostles as on the famed Basilica.

But the magnificent Basilica de Notre-Dame dominates this historic square, her spectacular interiors sculpted in wood and gold leaf. Inspiring stained glass windows illustrate biblical passages as well as parish history. And for over two centuries, seigneurs resided next door at St-Sulpice Seminary, still topped by a clock dating to 1701. 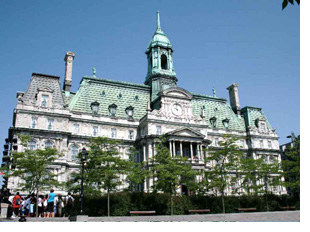 Though Admiral Nelson’s monument towers over this cobbled square, it carries the French explorer’s name. Once a large public market, Victorian streetlamps, tubs of red and yellow flowers, buskers and artists now create a lively ambience in this hillside square, day and night.

Along with locals and hoards of others, we toast Old Port’s panoramas from beneath flamboyant red awnings at one of its many sidewalk cafes.

At the top of the plaza, Hotel-de-Ville outshines a somber cluster of early courthouses.

From the grand balcony of this City Hall, French President General Charles de Gaulle once shouted, “Vive le Quebec libre!” causing quite a stir during his 1967 visit. Behind, we find remnants of a 6.4-meter high wall once stretching three kilometers around old town.

Built in 1705 for Montreal’s Governor, 15 connecting rooms housed his family of 16 children. With remarkable 17th-century artifacts and furnishings this stone, peak-roofed mansion exemplifies the gracious lifestyle of its esteemed residents.

Behind the house we wander the French-style Governor’s Garden, tranquil and fragrant. Inspired by gardens at Versailles, this spot replicates former seigneurial gardens flourishing with fruit trees, flowers, vegetables and medicinal plants…but on a much smaller scale. “ 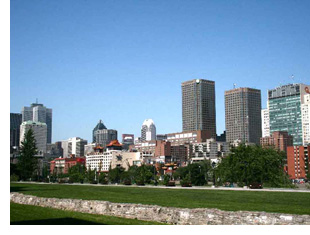 Then, everyone had gardens; large ones like this covered nearly two-thirds of the old fortified town,” explains the gardener, harvesting pungent chives, young carrots and emerald sprigs of parsley.

Fondly remembered as Father of Canadian Confederation, his considerable achievements also included creation of Quebec’s civil code and development of the Grand Trunk Railroad, all documented in his faithfully restored office.

Looping back, we pass Maison-de-Pierre Calvert from 1725, possibly the most photographed of all the heritage houses.

The original homeowner collaborated with rebels during the American Revolution, holding clandestine meetings here with Ben Franklin, an envoy sent in 1775-76.

Notre-Dame-de-bon-Secours has been a place of pilgrimage since 1665. Mariners believed the 10-meter rooftop Virgin Mary and her glorious angels safeguarded them at sea; some donated tiny ships in appreciation, many of which we notice hanging in the chapel.

A leisurely walk westward takes us past silver-domed Marche Bonsecours, Montreal’s major agricultural market for over a century. Restored for its 150th anniversary, her long 100,000-square-foot limestone building has been re-established as a modern marketplace featuring specialty shops, exhibitions and sidewalk cafes…

By strolling Montreal’s historic streets and acquainting ourselves with early personalities, we’d traced the development of this little French fur-trading town into today’s happening metropolis.