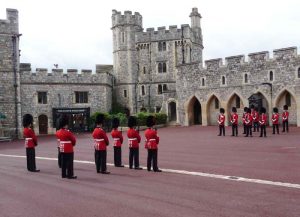 Pageantry and tradition await us just thirty-minutes away from Paddington station. During an easy day trip from London, my husband, daughter Jessica and I hop an early train and spend an enjoyable day sightseeing in both Windsor and Eton, two historic English towns.

Windsor is best known for its castle, perched above the town for 900 years. The world’s largest and oldest working castle has served English monarchs ever since William the Conqueror built it there: King John, as he waited to sign the Magna Carta at Runnymede; imprisoning Charles I as he awaited beheading. Queen Bess renovated it; Victoria mourned Albert, her beloved husband who died here in 1861. It even sheltered the Royal family during WWII. Today, Queen Elizabeth’s royal standard flies above its 1,000 rooms when she’s in residence.

Although this remarkable castle has been altered over the years, the defensive Curfew Tower looks just like it did in 1227…but now serves as St. George’s bell tower, chiming out rousing hymns and still providing quick, private exits for the Royals!

Inside Gothic St. George’s, we locate the tombs of Henry VIII, his favourite wife Jane Seymour, Charles I, Edward VII and other notable sovereigns. An enthusiastic docent standing under an array of colorful banners tells us, “Knights of the Royal Garter meet here in these magnificent choir stalls; individual coats of arms above them symbolize their backgrounds.” Undeterred by light drizzle, we watch the ceremonial changing of the guard in the outer courtyard and listen to the regimental band belt out brassy tunes. Both to and from the castle, the Guard marches through this charming Victorian town, an eye-catching sight.

Along cobblestone streets leading away from the castle, we pass many little teashops, as well as antique and silversmith shops. Nell Gwynne, the mistress of Charles II, once lived on Church Street, very close to her Royal lover’s chambers! After taking a look at Christopher Wren’s elegant Guildhall and Crooked House Tea Rooms next door, we stroll the pedestrian bridge across over the picturesque Thames River to Eton’s hallowed grounds.

Mid-way between Eton College and Windsor Castle, we pop in for a ‘posh’ meal at Gilbey’s bar also on the High Street…and catch one of the many trains travelling this popular route back to London.