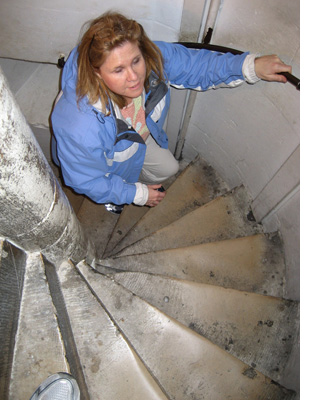 It feels like we’re heaven-bound while trekking up the stone stairwell that spirals from the ground floor of St Paul’s Cathedral to its glittery cupola dome.

And although we’re only halfway there, I’m ready to throw in the towel. Sure, I was forewarned to lace up my Rockports when exploring London’s tourist trail, but I didn’t think to bring along cross trainers.

“Only a hundred more stairs before we reach the Whispering Gallery,” encourages Brent, my Olympian-fit husband, as he jaunts by like a loping gazelle. In spite of my drum-rolling heart beat and burning thighs, I plod onward and upward. After all, doesn’t slow and steady win the race?

The reward is had by all who ascend the two hundred and fifty-nine steps to this pivotal hushed spot.

Immediately after emerging from the claustrophobic staircase, an awestruck “wow” escapes me. At the midpoint of this open rotunda, we have a bird’s eye view of the eighteenth century architectural masterpiece. 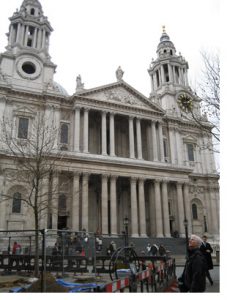 The cathedral has been constructed in the shape of a cross, and intersecting the two arms is a bejeweled dome which now hovers over our dizzy heads. Light flows in through leaded panes onto Roman pillars, intricately-etched archways and mosaic murals of theological statues. The scenes depict the life of St Paul and shimmer with gilded glory. It’s truly a sight that humbles to the core.

“I can’t believe this sanctuary was completed way back in 1708,” Brent says, while checking out the pamphlet of our self-guided tour. “And it was designed without the help of any software program!”

We discover that the acclaimed Brit architect, Sir Christopher Wren, is the mastermind behind this Baroque beauty.

Although he was confronted with political pressures along the way, after thirty-five years of sweat and toil, he proudly unveiled his finished product. It still stuns us today! As well as scheduled services the cathedral has been the resplendent venue for many celebrations and funerals.

Farewells to leaders like Lord Nelson, the Duke of Wellington and Sir Winston Churchill have been integrated with royal birthdays, Golden Jubilees and memorable weddings. I recall the many photos taken of Lady Diana Spencer as her train trailed down the aisle of this enormous nave.

Branching out from both sides beneath the glorious dome are crypts, where over three hundred famous souls have been laid to rest. The cathedral’s creator, Sir Christopher Wren, is one of them. Inscribed on his burial slab is a Latin phrase that translates to, “Reader, if you seek his memorial, look about you.” Isn’t it the truth!

The Whispering Gallery encircles just beneath the dome’s interior, and due to its ingenious construction, a quiet whisper can be audible from the opposite side –hence the name. Embedded seats of stone, allow us to rest a spell and resume our heart rates. It’s here where I also take time to reflect on the incredible surroundings and the man who was at the helm of it all.

Although St Paul’s Cathedral was likely Wren’s pièce de résistance there was certainly no moss growing on this English chap.

As well as designing fifty-one London churches, his creative endeavors were spread far and wide. 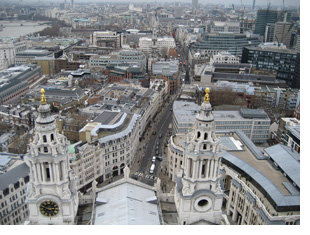 On our first day to this vibrant metropolis we had ogled over his work at Hampton Court, a stately palace to a number of past Royalties, most notoriously being Henry VIII. Although this big-bellied fellow with the sketchy nuptial history had long since departed by the time Wren was commissioned, the palatial halls and great Tudor kitchens are certainly reminders of his reign.

Wren was actually hired by William III in 1689, for the purpose of giving the place a total face lift. Unfortunately even Kings have a budget, and the one that Wren presented was a little too steep for His Highness’s britches.

Instead of tackling the entire abode, his work was limited to the King’s and Queen’s apartments –and believe me, they were nothing like the condo of today’s standards! In spite of a few mishaps and a couple of fatalities, all was eventually transformed to the King’s liking.

With headsets crowning our skulls we had listened tentatively to the entire tale, and while meandering from one glitzy room to the next, had gawked like envious scullery maids.

We had also checked out Wren’s similarly embellished décor at Kensington Palace, and strolled by his steeple-like Monument at Fish Street Hill. The fluted column soars upwards to sixty-five meters and commemorates the Great Fire which devastated London in September, 1666. It provides a great panorama if you want to hoof up the three hundred and forty-plus stairs to the pinnacle. Needless to say, I had kept on walking.

“Do you know where the stairwell is that leads to the outdoor observatory?” Brent asks. I’m jarred out of my ‘reflecting Wren mode’ by my husband’s question.

“There are more stairs?” I respond, feeling quite content to remain on duff beneath the glittery dome. “As well as the Stone Gallery,” he explains, “there’s an upper Golden Gallery which offers an awesome city view.”

From out of the corner of my eye, I can see Brent gathering up his camera equipment. He’s preparing for the next two hundred and seventy-one steps that lay ahead. And all I can think is, “legs don’t fail me now!”

This week Traveling Tales welcomes the freelance writer/photographer team of Jane and Brent Cassie, who live in Surrey, a suburb near Vancouver B.C. on Canada’s West Coast.

1: Trekking the stone staircase.
2: The famous façade of St.Paul’s on a gray London day.
3: Looking down on Ludgate Hill, the street approach to St.Paul’s.