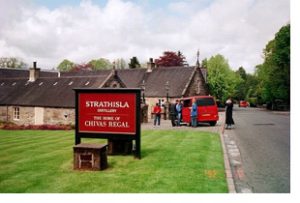 Scotland — a land of rivers and lochs, of barren rocky hills and green valleys, of crumbling abbeys and castle-fortresses on crags and sea cliffs.

My first foray into this land north of England started in Glasgow and ended there, twelve days and 1500 miles later. Our group of six writers traveled in a red van with a kilt-wearing driver, Ken Hanley, who recited Robert Burns poetry and Scottish history throughout the journey.

Aside from the weather — a radio broadcast one day called it “dull and wet for the rest of the evening” — Scotland captures its visitors from Day One.

From Glasgow, we followed the sea to Ayrshire, continued through the Borders territory and the Lowlands to Edinburgh. We zigged and zagged our way to Perth and Aberdeen, then traveled through the Highlands to Inverness.

Ayr, south of Glasgow, became our base for getting acquainted with Scotland’s national poet, Robert Burns. His small birthplace cottage in nearby Alloway shows the tough life of 18th century farming families sharing cramped quarters with the animals. Burns left the farm laborer life to become a published writer by age 27.

Burns had spent leisure time at the Bachelor’s Club in nearby Tarbolton. We toured the two-story, well-appointed National Trust museum. Burns started his debate society and attended Masonic Lodge meetings there, found subscribers for his first book, and moved on to Edinburgh and fame.

Our first full day in Edinburgh began with circling the city’s periphery to view the city of spires and steeples. 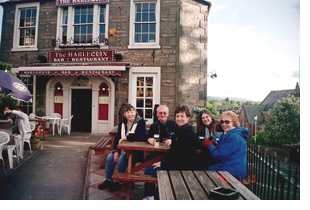 Edinburgh Castle and the 12th century Palace of Holyrood, both open to visitors, stand at each end of the historic Royal Mile. Between them, centuries-old buildings with shops and pubs and museums make it a great walk in the old city.

It’s a huff-‘n-puff climb up the volcanic crag topped by Edinburgh Castle. What violent happenings this castle has seen in a millennium. The English and Scots fought here in the 13th and 14th centuries.

Mary, Queen of Scots spent time in Edinburgh Castle in the mid-16th century where she gave birth to James VI of Scotland, later King James I of England.

Scotland’s queen almost since her birth in 1542, she returned from France a widow at age eighteen. A tolerant Catholic queen in the midst of the Reformation, she still lost to Protestant John Knox.

She fled to England to her cousin, Queen Elizabeth, but the queen imprisoned her for twenty years, and then ordered her beheaded. Even now, Mary’s violent death (“and she was a queen, after all”) is considered unforgivable by the Scots.

The Borders Region and Beyond

Headed north for the Trossachs, we stopped along the Firth of Forth to see the century-old marvel, a cantilevered railroad bridge, and the Hawkes Inn, where Robert Louis Stevenson lodged and wrote about in Kidnapped.

In the Trossachs, our red van wound through wooded Queen Elizabeth Forest Park. Back-packing hikers shared the road in this superb walking area, only one hour from Glasgow and Edinburgh.

We passed through Perth with time for little more than sleeping and eating. Ah, what civilized eating at the vintage Royal George Hotel, ending with coffee and chocolates in the drawing room.

And a detour to the edge of the North Sea to walk out to abandoned Dunotter Castle, isolated high on a narrow cliff.

The highland city of Aberdeen, begun in the 1300’s, sparkles when the sun hits its granite buildings. At the Aberdeen Harbor, where the Cutty Sark was built, we heard its Captain McCoy would take only real whisky aboard, hence the saying, “the real McCoy.”

And the real McCoy of what we call Scotch is highland single-malt whisky. We stopped at the Royal Lochinvar distillery for a wee dram. 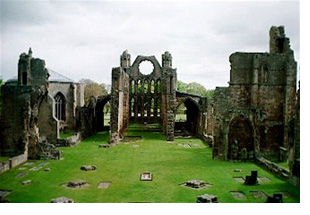 Inverness invites walking. We dropped bags at the Royal Highland Hotel and set out along the banks of the River Ness, crossing foot bridges, with a stop for refreshment and a rest at the Harlequin pub.

“Order a whisky and a half,” Guide Kenny said. “You’ll get a dram of single-malt highland nectar and a half-pint of the pub’s beer specialty.” Bundled and shivering at the water’s edge, warmed inside by powerful booze, the group morphed into real Scots.

Next, the Culloden Battlefield, a must stop to understand the Scots’ bitterness toward their conquerors, the English. The 1746 battle, the last Jacobite uprising, finished with a massacre of women and children hunting for family after the battle. Take a haunting walk through the battlegrounds where fresh flowers decorate clansmen’s graves.

Great sights crammed into the next two days: the Isle of Skye; the ancient stone circles, the Clava Cairns; Loch Ness, searching for the monster which only surfaced on film.

On the long drive toward Glasgow, as Scottish music resounded throughout the van, we recalled our many encounters with the gorgeous rugged land, its people and history.

Aye, it was a bonnie visit.

This week Traveling Tales welcomes Nell Raun-Linde, a free-lance travel writer, and member of NATJ, who lives in historic Benicia, a small California town between San Francisco and Napa Valley.

Photos by Lou Raun-Linde:
1: Our red van makes a pit stop at a Scottish distillery.
2: Our group takes five at the Harlequin Pub.
3: The beautiful ruins of Elgin Cathedral.