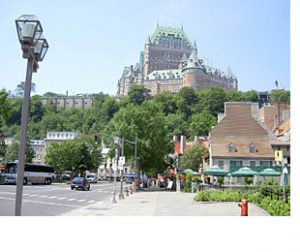 From Québec City’s magnificent castle-like Le Château Frontenac with its medieval stone towers, gables and copper turrets, we surveyed the St. Lawrence River. For a long time, we stood enjoying the enchanting view.

From our vantage point, in this symbol of the city, it was easy to dream of the past – the time when Samuel de Champlain, in1608, established the city, which was to become the cradle of French civilization in the Americas. For travellers, this most photographed hotel in the world is a fitting landmark for Canada’s oldest city.

Québec City, deriving its name from the Indian word, Kébec (meaning where the river narrows), was built atop a cliff, overlooking the St. Lawrence. A natural fortress, it became the capital of New France and fended off numerous attacks until occupied by the British in 1759.

After the battle on the Plains of Abraham, New France became a British colony until confederation in 1867 when it became a part of Canada.

Even though today Québec City metropolitan area has expanded to an urban centre of some 717,000, the walls of the original old city still stand, inside of which live about 5,000 people. This part of the city has become a much sought after mecca for the 1.2 million non-Canadian annual visitors, a good number of which are from the 80 cruise ships that annually stop in the city.

A historic treasure, Québec City, which in 2008 will celebrate its 400th anniversary, is an enchanting French monument planted in North America. A cultural hot spot, the city is the capital of the province of Québec and home of the National assembly, a busy port, and one of Canada’s most well-known tourist destinations.

Québec City’s charm comes from a combination of its architectural, cultural and historical elements. The mixture of French, English and modern styles of buildings gives the city a very catchy appeal.

This along with its setting make it one of the most picturesque towns in Canada. At the heart of Québec City’s charisma is the old walled town the only walled city in North America, drawing the majority of visitors.

After taking a horse-drawn carriage ride, or as it is known caleche ride, around the renovated 4.6 km (2.9 mi) walls that encircle the old part of town, visitors usually climb atop the ramparts to relish the maze of medieval-like narrow streets and the sloping roofs of buildings.

Down on the street it is pleasant just to walk along the alleyways inside the stonewalls and enjoy the French architecture from the bygone years.

In this walled compact area, a living history book of the town, are the most interesting sights in the city. The narrow cobblestone streets and quaint town squares – relics from the past, the venerable churches, including the first stone church built in North America in 1632, and turreted buildings give the area a distinct medieval European look.

There is plenty to see and do along these worn streets such as historic churches, hotels, forts and museums and, in between, boutiques, shops, galleries and cafes or bistros. The concentration of historic buildings in old Québec, some dating to the 1600s, is the reason that it was designated by UNESCO in 1985 as a World Heritage Site. 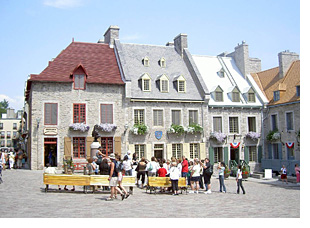 A small part of the old city known as Basse-Ville or Lower Town, next to the river, is the oldest quarter in the city, filled with impressive renovated old structures from the 1600s and 1700s. It was here where Samuel de Champlain founded New France in 1608. Basse-Ville lies outside the walls, between the base of the cliff and the river, and has a good number fine shops and restaurants. Stairways lead down to Basse-Ville from the bluff, but an easier way to go is the renovated funicular – a glass elevator sliding up and down a ramp that has been in use since 1879.

These two old areas contain the majority of the city’s interesting sights, but, beyond the walls of Vieux Québec, the modern sections that encompass parks, office buildings, shopping malls and modern homes also have their appeal.

There are 27 museums in these newer areas and in the old city. The most important of these is the Museum of Civilization in Basse-Ville which focuses on Québec’s provincial history, but has exhibits relating to other cultures from around the world; 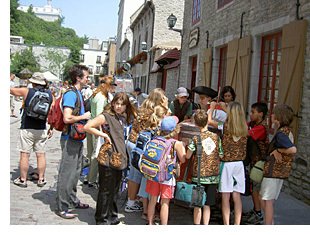 The Museum of French America, noted for its stunning chapel. The Museum of Québec; an architectural master piece, is one of Québec’s most important museums, containing an extensive collection of Québécois art and historical documents.

After visitors have explored Vieux Québec, I suggest they should venture out to explore the remainder of the city. Immediately, beyond the walls of the old city is the Grande Allee, dominated by Victorian mansions of the late 1800s, and considered by locals to be a smaller version of Paris’s Champs Elysees.

Here, where the beautiful people nightly congregate, there is a large concentration of cafes, bistros, restaurants and some of Quebec City’s best pubs and nightspots. The most important public building along the Grande Allee is the impressive National Assembly, more than a hundred years old.

The best time to travel to Québec City is during the famous January-February Québec Winter Carnival – a massive 17-day blowout, known as ‘Mardi Gras in the snow; or during the July Quebec International Summer Festival – the largest French-speaking cultural celebration on the continent.

These two festivals are at the top of the list of some 29 annual events in the city. In the words of one of our guides, “Any time you come, there will be one or two festivals in town. We like to have fun and, of course, like any visitor, you can join in.”

Photos by Habeeb Salloum:
1: A grand view of the upper town and the Chateau Frontenac Hotel.
2: Place Royale, one of the many squares in the Lower Town.
3: School children enjoy story time in the Brasse-Ville, or, Lower Town..

If You Go:
Facts About Quebec City:

Some Additional Important Sites in Quebec City Not to Miss: