Ah, but a man’s reach should exceed his grasp, or what’s a heaven for?
– Robert Browning 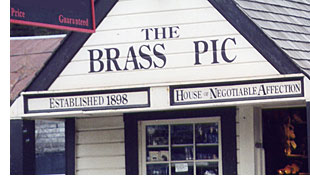 Just beyond the cruise ship dock in Skagway, Alaska, I look at a display of photographs taken just over a century ago. One of them is a shot of the harbour. The shoreline, seen through the cameraman’s lens, is a quagmire of mud. Horses, dogs, bundles of clothing, cooking utensils, camping gear and provisions lie strewn above the high-water mark. The year is 1897.

In my mind’s eye, I see men, glaze-eyed with fatigue, wading through water from scows moored off shore and hauling equipment up the beach trying to beat the sixteen-foot high tides that could wash away their possessions—and dreams—in minutes.

They have travelled from San Francisco and Seattle, packed like cattle in tramp steamers, hungry for Yukon gold. Some are self-proclaimed gentleman adventurers on the road to El Dorado; others are ordinary citizens, bank clerks and blue-collar workers. 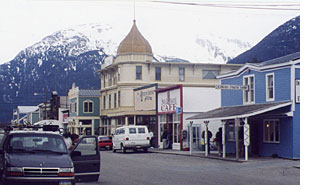 Most are desperados: stubble-chinned, brawling toughs who would give Skagway, with its bars, flop-houses and con-artists, the reputation of being the most lawless town in Alaska.

Some took the short but gruelling Chilkoot trail out of Dyea; others with equipment loaded on horses or dog-sleds, opted for the White Pass-Klondike trail winding for 40 miles through a wilderness of slush, shale and unyielding rock-face to Lake Bennett—and thence a further 500 miles up the Yukon River by boat.

Fast forward a century: our tour bus halts on the broad Klondike Highway and the group dismounts to gaze at the remnants of the White Pass trail only two feet wide in sections, and overgrown now by vegetation.

I am awed by the stampeders’ tenacity in the face of terrifying odds—and aghast at the sight of Dead Horse Gulch where 3,000 horses plunged down the 500-foot canyon to their deaths. The trail snakes past rushing streams and precipitous gullies; ice-age glaciers stand jagged-toothed against the sky, inscrutable witnesses to humanity’s quest for greed and glory.

On the return trip, our driver and guide, Brian, regales us with tales of Skagway’s colourful characters—confidence tricksters like Jefferson Randolph “Soapy” Smith and heroes like city engineer Frank Reid.

On July 8, 1898, Reid and Soapy came muzzle to muzzle in a melodramatic shoot-out. Soapy aged 37, was killed instantly; Reid died twelve days later of gunshot wounds. Reid has an elaborate memorial in the Skagway cemetery; Soapy was buried unceremoniously in an unmarked grave.

Today hardly anyone in Skagway remembers much about Reid. Soapy however has become a folk legend! Ballads are sung about his escapades, the local theatre puts on “The Days of ’98 Show with Soapy Smith”, and on July 8th every year the town hosts a ceremonial wake in his memory!

En-route back to Skagway, our tour bus pulls into Liarsville—a replica of a Klondike campsite.

Our hosts tell us that “Liarsville” derived its name from the pressmen who arrived here in pursuit of the hottest media scoop of the decade. Needless to say, after one horrified look, they vamoosed in a hurry.

However, to satisfy their editors (and the public panting for information), they filed reports that read like holiday brochures: trails winding through lush evergreen forests with picture-postcard mountain peaks in the background and a cruise through the sparkling waters of Lake Bennett and the Yukon River. “Typical yellow journalism!” says the speaker. “No different from today!” The crowd chuckles. I surreptitiously remove my press badge!

Liarsville is artfully reconstructed. There is a barber’s shop stocked with what looks like medieval instruments of torture, a laundry and dry goods store (read ‘gift shop’!) whose porch boasts a honky-tonk piano.

The stampeders paused here to bolster their spirits at the bar (literally and figuratively), and to linger in the company of ladies offering the delights of “negotiable affection”. They exchanged yarns of braggadocio, and stocked up on tobacco and provisions before hitting the relentless trail once more.

A vaudeville show is in progress. Cookies and mulled cider in hand, I chuckle at anecdotes, boo/hiss villainous characters, envy the lissom curves of “Klondike Kate” and thrill to the verses of Robert Service. 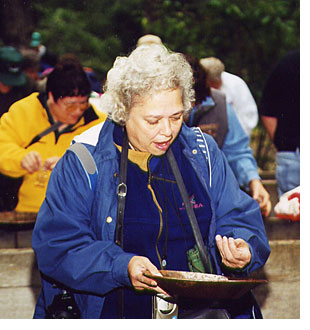 I also pan for gold, and go “aaaah!” as I find a teensy speck in my pan. Real gold, but, shhh…planted to ensure that all tourists leave with a fleck or two in their pockets!

Which is more than what the sourdoughs (miners) took home.

By the time they reached Dawson City, all the claims had been staked and the owners of the mines had already raked in their millions’ worth of gleaming nuggets. For some stampeders, however, the journey was accomplishment enough: an adventure of heroic proportions.

They were metaphorical Argonauts, in search of the Golden Fleece—and, ironically enough, ‘fleeced’ is what they were!