An eclectic group of passengers at the Ardrossan ferry terminal boarded the top deck of the Caledonian Isles as we prepared to cross the Firth of Clyde to reach the Isle of Arran. Dubbed ‘Scotland in Miniature’, the island is studded with craggy mountains, bracken-clad moors, beautiful beaches, castles and a history as colorful as the kilt.

A chill wind cutting through my woolly sweater, sent me scurrying for cover. Below deck, my husband and I gingerly picked our way through a jumble of golf bags, fishing rods and bulky rucksacks which looked as if they’d been purloined from an army surplus store.

By now, the only vacant seat was beside a weather-beaten shepherd and his pair of nervous collies pacing at the end of a rope.

As our ferry nudged against Brodick pier, I thought back to my childhood holidays when the journey from Glasgow used to be a half-day undertaking complete with flasks of hot tea and enough egg-and-cress rolls to feed a Highland regiment. Today the train and ferry trip from Glasgow Central station takes less than two hours. 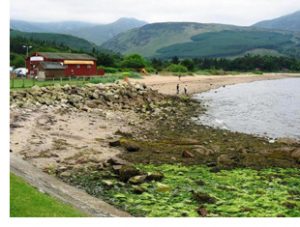 A short walk along the grassy esplanade took us to our B&B where we received a warm welcome. Our bedroom window overlooked the brick-red sands of Brodick Bay, so named from the Old Norse word meaning ‘broad bay’.

On the far shore, the sharp summit of the island’s tallest mountain, Goat Fell (874m), was unusually devoid of mist. The hill walkers and mountain bikers would be pleased.

Top of our sightseeing list was a visit to 13th century Brodick Castle which is now owned by the National Trust for Scotland. An elderly volunteer clad in a tartan skirt, nimbly led us up a broad staircase under the watchful eyes of 87 mounted stags’ heads. 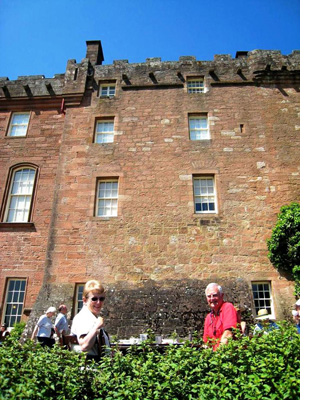 Our self-guided tour drew us into a time capsule of Scottish Baronial life and uncovered a veritable treasure house of art, porcelain and silverware. Afterwards we meandered through the 65-acre woodland Country Park and alongside pastures dotted with Highland cattle.

Having completed our loop, we followed the sound of clinking teacups and found ourselves in the castle’s terrace tearoom. Volunteers were doing a brisk business selling fresh scones, shortbread and local ice cream.

Outside, with the castle ramparts sheltering us from the prevailing wind, we basked in the sunshine. Our few crumbs were shared with a robin redbreast which eventually flew off to the adjacent walled garden.

History buffs can happily while away a couple of hours at Brodick’s Heritage Museum which is situated in an 18th century croft farm. To turn the clock back even further, however, we drove inland over the scenic String Road to Machrie on the opposite side of the island. 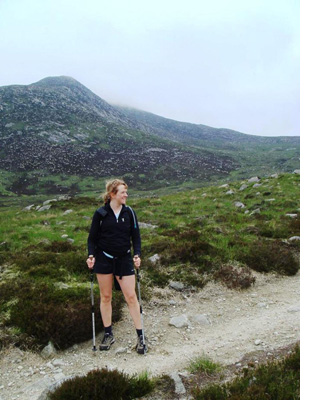 From here we walked along a track to the Bronze Age stone circles at Machrie Moor which are evocative of Stonehenge. Unfortunately we weren’t the only visitors. Clouds of pesky midges descended upon us and our flailing arms did nothing to keep them at bay.

For a scenic daytrip, visitors can take a bus, drive or cycle round the island’s 100 km of coastline.

Dotted around the perimeter is a necklace of unspoiled seaside villages – perfect spots to enjoy afternoon tea or visit craft stores which display local paintings, pottery, jewelry and wood carvings.

One of my favorite villages is Edwardian-style Lamlash. From its jetty, a small boat transports visitors over to nearby Holy Isle which once Christian, is now a Buddhist spiritual retreat.

There’s also Kildonan with its playful seal colony; the hamlet of Corrie with its white washed cottages and Blackwaterfoot with one of the island’s seven golf courses.

A perfect spot for sunset photography is Lochranza with its 14th century ruined castle made famous by Sir Walter Scott’s epic poem ‘Lord of the Isles’. It was near here that I spotted a herd of magnificent red deer who, having caught my scent ascended to the highest ridge.

My last memory of Arran was watching a row of moving antlers outlined against a dimming sky. It is a sight forever etched in my memory.