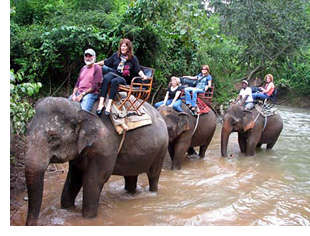 A monkey swung on a vine above our heads in metronome-fashion, as if counting the humans entering his domain with each side-to-side movement. I set off into the tangle of jungle with my husband Rick and our guide Yui (U-ey) checking periodically for unsolicited passengers clinging to my “leech socks” (cotton gaiters that are a must during the rainy season). The heady scent of damp foliage was intoxicating. Towering rubber trees bore jagged claw marks from large cats that sleep in their branches. We came across elephant licks; patches of red soil sensed by pachyderms to be rich in minerals. Near a water hole, ginger plants ripped out by their roots and fresh dung were evidence of a recent visit by one or more of the 250 wild elephants that tramp the 2,168 sq km Khao Yai National Park. 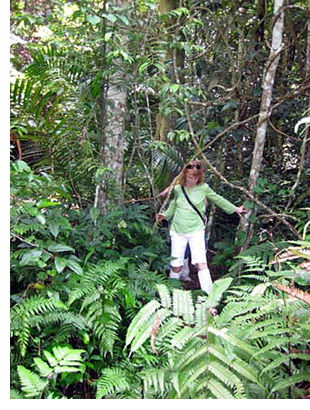 This national park is in the gateway province of Isan (EE-san). The colossal Isan region is composed of 19 provinces in the northeast of Thailand, and is the least explored part of the country. Being modern day explorers, we travelled in a comfortable air-conditioned bus for five days across the five most southerly provinces. With Yui’s guidance we became immersed in the Isan culture, in which village life goes on as it has for centuries; a slow steady pace steeped in tradition.

Beyond the jungle the landscape morphed into bright lime rice paddies stretching to the horizon. Tethered water buffalo idly grazed along the roadsides.

After an overnight stay in Nakhon Ratchasima city (Khorat to locals), it was to Jungle House, a small village that sustains itself by offering elephant rides to visitors for a small fee. The well-cared for elephants are considered members of the family. My new friend Chinda and I sat in a box-chair on our elephant Powpam’s back, and Mahout “Mam” straddled Powpam’s neck as we descended a muddy slope to the river. I was taken-aback when Mam swung herself onto an embankment, and motioned for ME to take her place as “Queen of the Jungle” on Powpam’s neck. 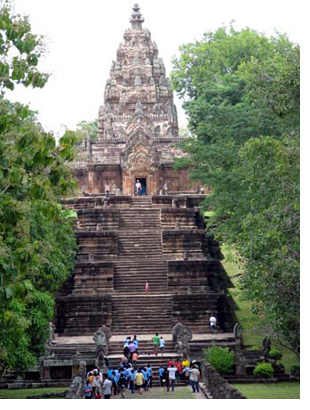 In Buri Ram Province our highlight was Phanom Rung Historical Park. A restored pink sandstone and laterite Khmer temple crowns the summit of a 200-metre-high spent volcano. The long promenade that leads up to the lengthy stairway is flanked on either side by naga (5 headed mythical serpents). Erected during the Khmer rule in this area between the 11th and 13th century, and dedicated to the Hindu destroyer god Shiva, this temple is an awesome display of their architecture and art in the carved lintels, pillars and decorative friezes.

The city of Surin was our next sojourn. Yui said of all the country’s night markets, Surin’s is not one to be missed. We were pulled by peddle-rickshaws to a foot-ball-sized field. Food vendors sat under light bulbs strung on poles selling peculiar fare. To us westerners and other Thais nothing stands out in Isan cuisine as crunchy insect snacks with chili sauce coating. Rick could not resist having a photo taken of him sampling a few to shock the folks back home – the only taste he said was the potent spices. 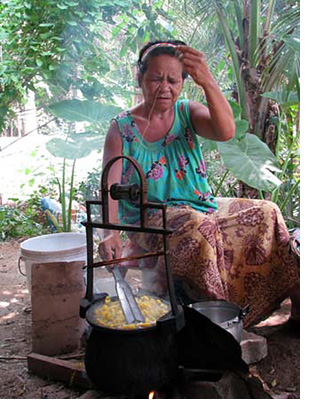 The following morning’s excursion was Ban Tha Sawang, a village that weaves silk so fine it is fit for a king…the present-day King Rama IX that is, and the royal family. From the baskets of worms munching mulberry leaves, we followed the process to plump yellow cocoons bubbling in a pot of boiling water under a women’s watchful eye. As each pod burst she adeptly caught hold of a thread and wound an unbelievable 250m from each pod around a hand-cranked reel.

Vats of indigo dye were being processed that day; on another day it might be red from insect nests, or green from tree bark. A large loom clacked away as four women worked simultaneously to weave the silk threads into intricate designs at a rate of 5 to 7 cm a day, selling for up to 70,000 Bhat per metre (approx $2,400 Can). More in line with my coffers, roadside vendors sell more affordable factory made silk scarves, purses, and shawls, easily activating my shopper-mode.

It was then on to Ubon Ratchathani, the easternmost province of Isan, bound by the Mun River to the north, the Mekong and Laos PDR to the east, and Cambodia to the south.

From our hotel, perched on the banks of the Mekong, it was surreal to throw open my balcony doors to the roar of this brown river churning not ten feet away, and to gaze across its breadth to the spiraling smoke and lights of a Laos village on the other side.

At a nearby point, known as Maenam Song Si (Bi-coloured River), we witnessed the phenomenal spectacle of the muddy Mekong meeting the sparkling blue-green waters of the Mun.

Yui said he never tired of taking visitors to Pha Taem National Park with its huge mushroom-shaped stone pillars carved by nature over the millennia. Other paths crest a mountain side where two steep cliff faces are covered with prehistoric rock paintings dating back 3,000-4,000 years. I was most intrigued by human forms with tall flat heads and by hand prints on the underside of a rock shelf, positioned as if they were holding up the mighty cliff above.

As we flew back to Bangkok my mind swirled with the montage of spectacular scenery, marvels of nature, ancient ruins and village customs. Yui did well in showing us the many aspects of Isan culture where the past and present meld in every day life and the hospitality of the people left an indelible imprint on our souls.

IF YOU GO:
For information on transportation, sites and accommodations in Isan, contact the Tourism Authority of Thailand www.tourismthailand.org.

Khao Yai National Park was designated as a world heritage site in 2005 by UNESCO for its biodiversity of flora and fauna. The monsoon forests and grasslands are habitat for 70 species of mammals, 70 reptiles, 315 species of birds, and 189 different butterflies.

Surin city explodes with visitors each November for the Elephants Roundup, when hundreds of elephants and their mahouts take part in battle re-enactment, games, and parades.

Irene Butler is a freelance travel writer who makes her home in Richmond, B.C.. a suburb of Vancouver on Canada’s West Coast.