Story and photos by Theresa Perenich

“Are you really cruising the wine country in California?” asked one of our Georgia friends. “Yes,” said my partner Phil. “We’re going on a three day Culture of the Vine cruise with Cruise West. The ship embarks from Redwood City, California, sails across San Francisco Bay and docks a few miles up the Napa River the next morning. We’ll use the ship as our base, touring various Napa and Sonoma Valley wineries for two days.” 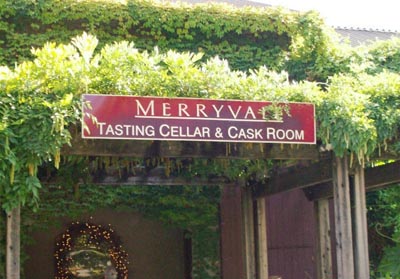 Knowing only that Redwood City was in California, I checked the map and found it was 25 miles south of San Francisco. On our ship, The Spirit of Yorktown, we worked our way north to San Francisco Bay where the Golden Gate Bridge was our backdrop. After a safety meeting, we and 100 other wine loving passengers drank sparkling wine and ate appetizers as we left Redwood City.

Later that evening, our on board wine expert, Allan Bree, discussed “di-mystifying wine”, vineyard practices and winemaking techniques in Napa and Sonoma. The Roman classical poet Ovid said, “Time, motion and wine cause sleep.” Content with wine, dinner, and companionship, we strolled to our cabin anticipating the next day’s visit to the Napa Valley wineries. We slept well. By early the next morning, we had reached the Napa River and were greeted in the lounge with freshly baked cranberry scones and fruit. We were ready to visit Alpha Omega and Merryvale Wineries in the Napa Valley. 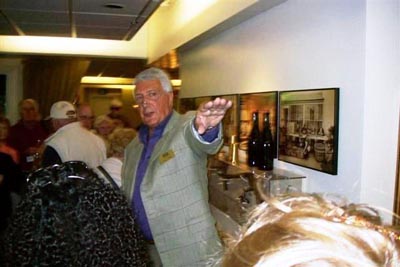 Settled in 1836, Napa Valley includes the towns of Calistoga, St. Helena, Rutherford, Oakville, Yountville and the city of Napa. The first commercial winery was established in St. Helena by Charles Krug in 1861. Inglenook launched its winery near Rutherford in 1879 and won a gold medal in the 1889 Paris World’s Fair. At the start of the 20th century, there were over 140 wineries in Napa Valley while now there are over 700.

The winemakers at Alpha Omega Winery source their grapes from vineyards in the Napa Valley. Its founders, Robin Baggett and Eric Sklar, envisioned a winery that would evoke the hospitality of the farming community. The winemaking team includes Jean Hoefliger, a Swiss-born winemaker and Michael Rolland, a renowned wine consultant who produces his own wines in Bordeaux. At the winery, south of St. Helena, we sampled Sauvignon Blanc, Chardonnay, and Cabernet. Trying not to stagger, we re-boarded our bus for the next stop – lunch at the Napa Valley Campus of the Culinary Institute of America (CIA) located at Greystone Cellars. 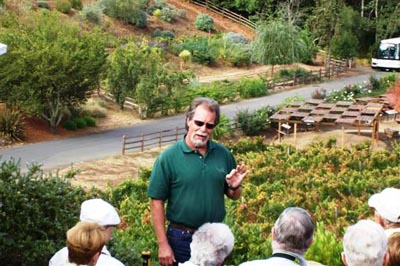 Built in 1888, Greystone is the largest stone winery in the world with 22 inch exterior walls of tufa (rough, thick, rock-like calcium carbonate deposit) stone. Christian Brothers made wine there from 1950 until 1989. The CIA has occupied Greystone Cellars since 1995.

Our lunch on the CIA’s Herb Terrace began with butternut squash soup, followed by grilled flank steak and ended with an apple tart piled with ice cream. Phil and I were ready for a nap, but another tasting was waiting for us at Merryvale, the first winery built in Napa following the repeal of prohibition in 1933. Merryvale, a family owned winery, produces 10,000 cases of wine annually. Its goal is to craft elegant, complex wines that reflect the fruit of Napa Valley’s vineyards, emphasizing quality over quantity. After tasting Merryvale’s Cabernet Sauvignon and Chardonnay we strolled to the Cask Room where century-old 2000 gallon casks lined the stone walls, imparting a romantic setting to the room. Back on the Spirit of Yorktown, Allan’s evening program was devoted to “Reading Wine Labels.” We learned the “hows” of wine and the manner in which soil, climate, and grape variety give wines a distinctive personality. We were primed for the next day’s adventure in the Sonoma Valley. 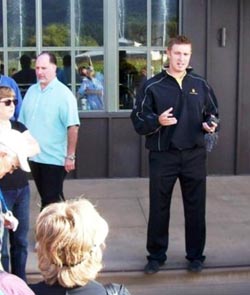 A clear, sunny morning ideal for visiting the birthplace of the California wine industry, the Sonoma Valley greeted us. Called The Valley of the Moon by indigenous tribes who settled there, the 17 mile long valley nestles between the Sonoma Mountains on the west and the Mayacam Mountains on the east. On a tractor-pulled tram we toured the 85 acre Benziger Winery. Thirty of its 85 acres are devoted to gardens, riparian areas, wetlands, and wildlife sanctuaries.

The wine quality at Benziger is defined by its Farming for Flavors™ program challenging growers to use sound environmental techniques to cultivate grapes. Their organic method avoids using synthetic chemicals while the Biodynamic™ program incorporates the environment in and around the vineyard using crop rotation, natural composts and tillage for healthy soil. In Benziger’s tasting room, we sampled Cabernet Sauvignon, Zinfandel and Merlot wines returning to the ship for lunch. Our afternoon schedule included sampling sparkling wines at the Domaine Carneros Winery. Established in the late 1980’s by Claude Taittinger, the 195 acre winery uses only Carneros grapes, most of which come from their vineyard. Sitting on a hilltop overlooking the vineyards is the Domaine Carneros chateau, built in 1988 by the French Champagne house Taittinger. With its outdoor stairway, marble floors, light wood paneling, crystal chandelier and portrait of Madame Pompadour, the chateau reminds us of the elegance of an earlier time. In high spirits, we went back to the ship for a social hour followed by the Captain’s Dinner. After a gourmet meal featuring chicken Wellington, shrimp, and Napa and Sonoma wines, we returned to the lounge for port and a dessert extravaganza. Our adventures in Napa and Sonoma had come to an end. While we slept, our ship made its way back south across San Francisco Bay. The next morning we disembarked The Spirit of Yorktown in Redwood City, filled with memories of good wines, good food and good times.