The Villa of Elizabeth Taylor and Richard Burton, linked to “The Night of the Iguana,” Casa Kimberley, is a fascinating Puerto Vallarta attraction 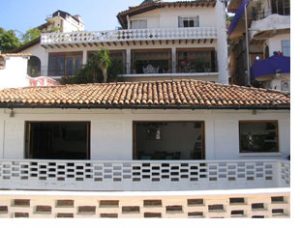 The place is haunted, its walls filled with old memories and lost dreams. Those days of wine and roses when a torrid love affair between one of the world’s most beautiful women, and a charismatic Welshman set the town on fire.

The setting is Puerto Vallarta; the couple are, as you’ve probably guessed, Richard Burton and Elizabeth Taylor, both of whom were married to other partners at the time.

An infatuated Burton bought “Casa Kimberley”—a nine-bedroom villa in Gringo Gulch— for $57,000 as a gift to Liz for her 32nd Birthday, and 42 years ago, this is where they lived, loved, battled and boozed.

And caroused with the likes of Peter O’Toole, Roddy McDowell, Spencer Tracy and Katherine Hepburn (also romantic fugitives from the glare of publicity) and John Huston, director of The Night of the Iguana.

The Night of the Iguana, and the sizzling Burton-Taylor affair, brought ravening paparazzi from all over the world, and changed Puerto Vallarta forever from a quiet town of a few thousand residents to a tourist destination that today draws well over three million visitors a year.

I am fascinated by the seeming immediacy of Casa Kimberley’s past. It’s as though I’ve dropped into a home where the owners have merely stepped out for a few moments. A collection of 1964 magazines and a well-thumbed book lies on a coffee table, and the carelessly flung, slightly flattened cushions on the nearby settee speak of frequent use. 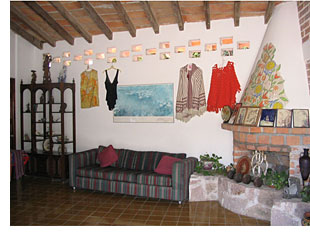 Taylor’s clothes still hang on pegs in a room adjoining the kitchen. And everywhere there are photographs—a random moment caught on camera, as Burton solicitously lights Liz’s cigarette, another of the two of them gazing at one another, silhouetted in a balcony doorway overlooking the town—he cradling a drink, she seductively barefooted, and wearing the briefest of briefs.

Given their spectacular fights, it is sometimes referred to more appropriately as the “Bridge of Reconciliation” as, having retreated into separate suites to lick their wounds in privacy, this was their pretty little kiss-and-make-up spot.

The relationship—Burton’s alcoholism and Taylor’s chronic hypochondria—eventually wore them both out. After their divorce Elizabeth never returned to Casa Kimberley, and when she sold the property in 1990, she abandoned everything—photographs of her children, personal letters, books, and cosmetics—even a half-finished crossword puzzle! 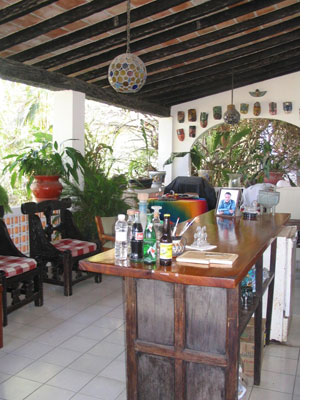 Burton, however, did return to Puerto Vallarta, this time with his third wife, Susan Hunt. Their villa, Casa Bursus, (a combination of their names) bought by Burton as a Valentine’s Day gift to his bride, is just a short walk around the corner from Casa Kimberley. Today it is part of Hacienda San Angel, an exquisite colonial style boutique villa.

Caught up in nostalgia for the glamour of old Hollywood, I knock on the ornate hand-carved entrance doors of the Hacienda. But alas, Burton’s shadow doesn’t lie across its bright, sunlit plaza.

It is, however, as sumptuous as any modern-day movie star could wish for. The owner, Janice Chatterton (who bought the property from Hunt) has a discerning eye for interior décor, and is a collector of antique furniture, fine art and beautifully crafted Mexican folk-art curios. The place is larger than it seems at first sight: three villas (including Casa Bursus) and nine lavish—and wonderfully romantic—suites.

Night of the Iguana features Burton as a drunken defrocked minister who drives a tour bus of unsuspecting spinsters on a mad ride to a seedy hotel set in the Mexican jungle.

Other characters are a young nymphet (Sue Lyons), a voluptuous widow (Ava Gardner) and a genteel woman artist (Deborah Kerr). The movie is steamy, raw, intense—not unlike Mexico’s fevered jungles.

It was filmed in Mismaloya—a short drive out of Puerto Vallarta—but the beachfront today bears no resemblance to the movie’s setting. Back in the sixties Mismaloya was primitive: no proper road access, phones or reliable plumbing and electricity. Today, this is the site of Barceló La Jolla de Mismaloya, a five star hotel.

I chat over a sumptuous Mexican lunch to Carl Guzman, the owner of the upscale Le Kliff restaurant in Mismaloya. He talks about those heady days of Hollywood magic. “My grandparents used to entertain Huston and the cast lavishly at our family hacienda,” he says. “What a thrill for us little kids! Imagine being fussed over by Liz Taylor!”

As I discover that evening, Burton and Taylor weren’t the only ones captivated by the spell of Puerto Vallarta.

It bewitched director John Huston as well, and for the rest of his life he was to return over and over again to his retreat in Las Caletas—a beachfront property of 1.5 acres, which he leased from the Chacala Indians. It fronts Banderas Bay, backs onto thick jungle, and is accessible only by boat.

Vallarta Adventures, an efficiently run tour company, have taken over the lease, and their Rhythms of the Night dinner and concert presentation takes visitors on a 140-passenger catamaran to Las Caletas.

As it did in Huston’s time, the breeze still sighs through the palm fronds, and the evening light is gentle.

A lavish buffet—traditional Mexican cuisine complimented with salads—is set out in a grove along the waterfront. Guests dine to the lively sounds of tympani and maracas played by strolling musicians. After dinner, we move to a large open-air amphitheatre set within dense tropical foliage.

Dusk falls and torches by the side of the stage, blaze into life. Mesmeric drum rhythms accompany dancers as they enact mythical tales of courtship, love, terror, cruelty and death. Their costumes are spectacular, their fire-juggling, flamboyant. Their performances unforgettable.

Huston may not have been too happy about this commercial invasion of his once secluded paradise. But the cheering crowd and I have no complaints.

Photos by Margaret Deefholts:
1: Exterior view of Casa Kimberly.
2: Liz’s clothes still hang on pegs as she left them so many years ago.
3: Richanrd Burton’s domain – his bar.

Vallarta Adventures (Rhythms of the Night and several other expeditions)
http://www.vallarta-adventures.com/rhythms/index.html
e-mail: danilo@dolphin-adventure.com