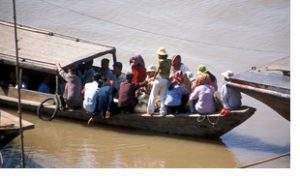 I first heard about the slow boat travels on the Mekong River from an Australian Queen over several cocktails. He was looking for his “spot” in Indochina and I was determined never to use road transport again on the shotgun highways of Cambodia.

I met the Queen in Siem Reap, Cambodia, in spitting distance of the famous Angkor Wat. When I arrived he appeared on the balcony at the hotel and that evening after several drinks he spilled far more stories than tales of slow boats.

But he did entice me, with plenty of eye fluttering, of romantic visions of slow, watery days watching floating villages, fishing boats and river life meander by. The stories became more colourful after a few margherita’s but I did not take much convincing.

Siem Reap is actually on the edge of the Tonle Sap, a tributary lake of the river. And so after the Queen and I parted company I decided to take a boat to Phnom Penh, from where you can follow the Mekong north or south.

The river actually starts on the Tibetan plateau at 5,181 metres in the Chinese Qinghai Province, crosses the Yunnan Province and follows the Myanmar-Laos border. It also forms most of the border between Thailand and Laos before plunging into Cambodia. It emerges again in Vietnam and finally gushes out into the South China Sea.

It’s the twelfth longest river in the world and runs like a vein through south east Asia for 4,200 kilometres; at times a raging muddy torrent, other times a sleepy coiling snake.

If it was India they would have made the river a god. People would come from everywhere just to dip a toe into the water. In Indochina river worship is not such a fad, but the 60 million people that live along its basin and depend on it daily for subsistence fishing, transport, industry and agriculture must view it somewhat religiously. The river also supports diverse fisheries, second only to the Amazon.

Certainly the names the locals have given it read like a list of credits. In Tibet it is called “Dza Chu”, in China “Lancang Jiang”, in Thailand and Laos “Mae Nam Khong”, in Cambodia “Tonle Thom” and Vietnam “Cuu Long”.

Translated these are the water of stone, the turbulent river, the mother of all the waters, the nine dragons river and the great water.

Standing by the Mekong in Phnom Penh, it was impossible not to be inspired by it – a murky expanse littered with fishing boats and local river craft, crumbling colonial architecture and Buddhist temples clinging to the banks and a view over cultivated lawns to the elaborate King’s palace.

The entire city was in preparation for the Bom Om Tuk festival. This three-day festivity celebrates the end of the wet season and the provision of fertile land. It draws people from every province and canoes were on display to be raced in the coming days.

From Phnom Penh I took the northern route to Laos, a three day journey to the border alone. Until Kratie the river was wide, brown and uninspiring. But north of Kratie it became a mosaic of rapids, eddies and whirlpools coursing between vegetated sandy islets. These featured waving children, birdlife, charging buffalo, coiling tree roots and flapping laundry. 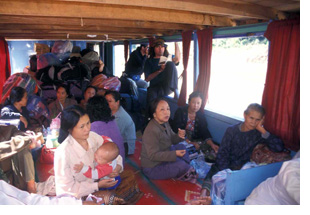 I took the common passenger ferries, keen to see how the Indochinese travelled. Boarding always started early loading bags of sticky rice, motorbikes and boxes of live chickens. Some ferries were air-conditioned with karaoke videos or over-dramatized gangster films. On others you could sit on the deck and enjoy the sunshine.

People played cards or with babies, drank Laos beer with their packed lunches, shuffled to the rear-side bathroom in flip flops, or even slept. 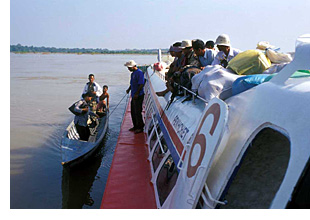 The ferries only ran once a day and were express. But they would take on new passengers mid-river – a fascinating ordeal as the smaller village boats tried to transfer people and possessions without spillage in the swirling currents.

In the mid-afternoon we would halt in a town of no-acclaim, its lack of tourism more fascinating as traditional life prevailed – vegetable markets, French breads, coffee houses with reclining chairs to watch TV, limited electricity and a lifestyle beyond laid-back.

Upon entering Laos the Mekong meandered through Si Phan Don’s 4000 islands. Some of the islands are open for tourism but for now the rice fields, buffalo, French villas and colonial railways remain intact. The pace of life was “lounging” interspersed with coffee, the rice harvest and children.

Leaving the Thai border, the river continued north to the mellow Laos capital Vientiane and the UNESCO listed Luang Prabang. The river coils around both cities and it’s impossible not to be within sight or conscious thought of it. Besides the river is the best place for dining and to people-watch. saffron-cloaked monks, village women with stained teeth and old fishermen.

From Luang Prabang it’s a two-day journey to the Thai border, a popular route for leaving or entering the country. The scenery here is dramatic with high mountains, virgin forests and clear waters. It was also the end of my Mekong journeys.

In Huay Xai, Laos, I met a young Thai Queen who I asked how I should cross into Thailand. He turned a heavily made-up face to me and said in accentuated feminine tones, “Walk down to the river and say ‘I want to go to Thailand.'”

He tittered down to the river with me in tight white jeans and high heels and in five minutes we had crossed the narrow stretch to Thailand in a small wooden boat. It seemed a fitting tribute I had begun and ended my Mekong travels with a Queen.

Photos by Joanne Lane:
1: A full load leaves a dock on the river.
2: Passengers enjoying the river commute.
3: A mid-river transfer from little boat to big boat.

Getting There:
An international airport services Phnom Penh and Siem Reap in Cambodia, and Vientiane in Laos. It is possible to travel overland between Laos and Cambodia, Cambodia and Vietnam, and Laos and Thailand with the relevant visa. At present it is not possible to cross into Burma or China on the river.

Getting Around:
Boat travel is unfortunately more expensive on some routes. If you want to travel by road there are a few options. Buses, pickups, vans or 4wds operate on all routes. For more comfort and a lot less dust you can pay extra to sit inside the car console. In the cities you can flag motorbike taxis or tuk tuks for short rides. Always negotiate the price.