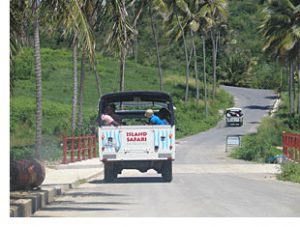 There’s a joke in Barbados that God must be a Barbadian. It’s the only way the 270,000 residents of this Caribbean island can explain the fact that year after year, they are spared from direct hurricane hits, while other isles not far away bear the brunt of the damage. “Every year we’re warned that a hurricane is coming, but each time it turns left or right of Barbados in the nick of time,” says Charles Marshall, a tour guide with Island Safari.

Marshall is at the helm of a mud-splattered jeep that’s escorting me and a group of travel agents through the island’s gullies and forests. Along the way, we pass large tracts of land filled with the waving heads of sugar cane plants, Barbados’ economic mainstay before tourism took a firm grip in the 1980s. “Every last drop of our sugar cane is exported to Europe, and we import our sugar from Guatemala,” notes Marshall wryly. “It makes perfect sense to our government, but it mystifies us locals.” 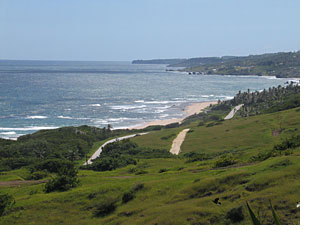 We’re standing on a hilltop, spellbound at the perfect beauty of Barbados’ rolling sand dunes that slope gradually towards a turquoise ocean. Foamy waves crash onto a powder-like sand, and the water is irresistibly warm, its transparency revealing the movement of brightly-coloured fish that dart through the shallows.

To get a better view, I board the Atlantis Submarine later that afternoon, for a trip 150 feet below the water’s surface. Inside the submarine, passengers sit back-to-back, their faces pressed against the porthole windows as a whirring sound fills the chamber and the numbers on our digital depth gauge start to rise. The light diminishes with our increased depth, and the only view initially is an expanse of deep blue. Suddenly, we’re at 120 feet and sitting on the ocean floor.

“This is the safest vehicle you can travel in,” our pilot, Adrian, assures us. “We can go as deep as 600 feet, and if the power should fail, the submarine will float straight up to the surface.”

At first I find myself checking the windows for signs of water leakage, but when none is apparent, I turn my attention to the subterranean outside world. We pass the ghost of a ship, the Lord Willoughby, which was sunk in 1974 to give recreational divers something to explore. Today, it looks straight out of a movie set, its skeletal remains encrusted with seaweed and its decks filled with the tropical fish for whom this vessel is home.

Next we approach a coral reef, marveling at its undulating topography, and at the bright corals that flourish in Barbadian waters. There are tubular corals, some with palm-like fronds that wave in the current. One has the appearance of a massive clam, while another looks like a giant, colourful amoeba plastered against the rock.

At 100 feet, the window yields a ballet of thousands of tiny fish swimming in unison around the corals. Then a school of horse-eye jacks floats by like silver apparitions. “They’re aggressive, territorial and quite tasty,” quips Adrian, as we start our ascent.

Submarine submersion is one way to experience the under-water world without getting wet. Another is a visit to OceanPark, an exquisitely kid-friendly, outdoor aquarium. Now just a year old, it displays the eastern Caribbean’s unique marine environment, with exhibits ranging from ray pools to shark tanks and the rocky coast. In the touch pool, kids are encouraged to feel the texture of marine creatures. In other areas, notably the Piranha exhibit, touching is less advisable. 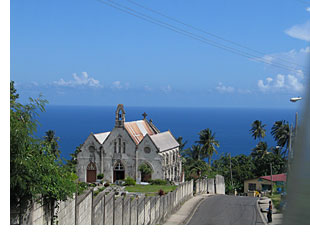 If you’re keen to get up close and personal with marine life, one way to do it is by snorkeling with the endangered green turtles, who gladly acquiesce to the caresses of snorkeling visitors provided their appetites are sated. Obligingly, the crew of Tiami Cruises offered sliced fish to entice them on my tour, and within minutes we had two large turtles peddling the water around us, their serious faces surfacing occasionally as if to ask, Oliver-style, “Is there more?”

In Barbados, the answer is unabashedly yes. With a plethora of secluded beaches, a seemingly never-ending supply of sunshine and blue skies, and a dozen parishes, each with their own personality and attraction, it’s easy to fall in love with this island.
And if the dearth of hurricanes is anything to go by, God all ready has.

2021 Update: Thomson Cruises has now been re-branded as Marella Cruises

If You Go:
• Getting There: The five-hour route between Barbados and Toronto is traveled daily by Air Canada. For more information visit www.aircanada.com or call (888) 247-2262

• Where To Stay: If you’re traveling with kids, the Almond Beach Village ( www.almondresorts.com ) is the best option, an all-inclusive establishment that, in 2005, was voted second in the top ten Caribbean family resorts by Conde Nast. With four, professionally staffed kids rooms, the village caters to newborns up to 18-year-olds, with child-friendly pools, wading pools for the tots and well-stocked play areas with swings, slides and more. For more information call (800) 4-ALMOND

1. Aboard Island Safari’s jeeps, visitors to Barbados go off-road to explore the island’s rugged terrain.
2. The Atlantic coast of Barbados is known for its turbulent waters and long stretches of spectacular coast line.
3. Barbados boasts many beautiful churches in its parishes, with magnificent views at every turn.
4. One of the island’s oldest resorts, The Crane Hotel, has incorporated its historic 1800s structure into its present day facade.