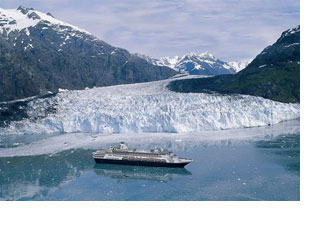 With a deafening roar, a 600-pound chunk of ice breaks suddenly from the edge of the tidal glacier and plunges with a ginormous splash into the ocean.”You’ve just seen an iceberg calving, folks,” comes a too-cheerful voice from the loudspeaker of Holland America’s Zuiderdam, which, at this moment, is cruising in an Alaska waterway known as Glacier Bay. Snow-capped mountains soar into the sky and blue-tinged tidal glaciers stretch as far as the eye can see.

Around me, people with cameras and binoculars pressed to their faces are exclaiming in wonder. “What a sight!” I hear someone say. “Isn’t that amazing!”

Three miles away from that calving glacier, our cruise ship is drifting while its captain carefully avoids the minivan-sized chunks of floating ice that surround us.

“If we were in the way of that calving iceberg, it could easily sink the ship,” Captain Werner Timmers confesses to me later from the Bridge, where he and a handful of finely uniformed navigation officers control the direction and speed of the 3,082-person-capacity vessel. 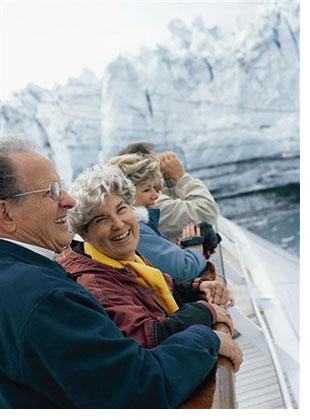 I am glad for his sharp wits, for despite the day’s bright sunshine, I have no inclination to go swimming. Fall overboard in this water, its temperature hovering at the freezing point, and hypothermia would kill you within two-to-four minutes. “The lifejackets are only there to help identify and locate the bodies,” a passenger quips.

There are parts of Alaska, such as this inside passage of Glacier Bay, that are pristine, untouched by human hands and breathtakingly beautiful. But there are also parts of the landscape where gift shops, restaurants and souvenir stores are ubiquitous, and the shopping landscape looks much like many American small towns.

Skagway, Alaska is one such place. The historic gold rush city that forms one of the major ports of call for many massive cruise lines including Holland America, Skagway has been completely transformed since cruise ship passengers began walking off the gangplank in the 1980s.

“Tuesdays and Thursdays are big days for us,” confesses Carlin “Buckwheat” Donahue, who heads up communications for the Skagway CVB. “Some days we get 9,000 tourists coming into town.”

The city wasn’t always flooded with tourists. In 1982, the closure of a major ore mine left Skagway in a state of economic depression, with an unemployment rate of 60 per cent.

“It was devastating for us,” Buckwheat reflects. “We looked at the opportunities, and decided to actively start courting the cruise lines.” 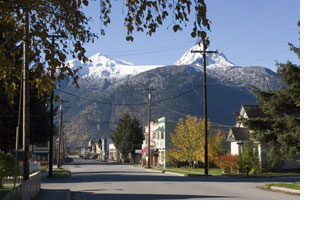 The courtship worked, and the arrival of the ships brought a revival to Skagway, with new stores and an influx of 1,800 new summer workers to man the tourism boom. “We went from economic depression to having the highest income in the state,” Buckwheat says.

That has brought changes, good and bad. For one, only 16 of the 80-odd stores on the main strip of Broadway Street are now locally owned, the majority of them multi-national chains selling gifts and jewelry.

An hour after the last cruise ship pulls away from the dock in September, 80 per cent of the city’s stores are closed and boarded up for the next seven months. “This city undergoes an amazing transformation then,” says Buckwheat, with more than a trace of irony.

One attraction that draws most visitors to Skagway is the White Pass & Yukon Route train. Passengers embark on a three hour ride on a route that snakes around the mountain curves, teetering close to the edge of many precipices.

The history of the railroad parallels the history of Skagway, so more than a relaxing way to appreciate the scenery, this railroad trip gives visitors insight into the city’s genesis and development.

It began in the 1890s with the discovery of gold, when tens of thousands of prospectors, the vast majority highly inexperienced in the area’s somewhat hostile terrain, tried to get to the Klondike to make their fortunes.

The steep valleys we pass along the way hold the bones of 3,000 unfortunate horses, for whom the torturous trail at the turn of the century proved deadly.

By 1900 the railway’s 110 miles of track were completed, not without a few fatalities. We pass a massive boulder, and are told of two railway workers who were crushed to death beneath it while toiling on the railroad. No-one was ever able to move the boulder, so their remains are interred in the same place they met their end.

We learn, on the journey, that of the 100,000 prospectors who tried to reach the Klondike gold fields, less than half made it there and only 4,000 of them found gold.

But though they left Skagway to seek greener pastures, the railroad built to help them get there continues to this day, with a long, endearing history.

For the past 100 years, it has been an economic lifeline to Skagway, transporting the gold mining operations of the first stampeders and later assisting the large corporations who control mining in the Klondike.

The railroad closed for six years in 1982, when world metal prices plummeted and the mines closed. But by 1988, the trains were hurtling merrily along the tracks once again, this time as a narrow gauge excursion railroad for Skagway visitors.

It is a relief, though, to clamber back on the ship after a full day of sightseeing and touring, and to surround yourself with the familiarity of its 11 decks.

Dusk is settling in as we pull away from port, and within hours, we are surrounded by heavily forested mountains, waterfalls tumbling from great heights down their steep slopes.

As the melancholy sound of the ship’s horn fills the air, we disappear into the misty night.