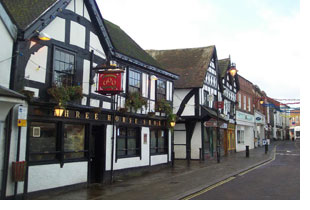 Summer has ended, the nights are drawing in and the majority of tourists are in annual hibernation, so now is the time to enjoy the sensory delights of many parts of the English countryside. My husband likes driving and taking photos whilst I love exploring somewhere new, so it was in total accord that we set off to follow the Black-and-White Village Trail in the north-western part of the county of Herefordshire.

The trail is a roughly circular route covering approximately forty miles between the ancient market towns of Leominster and Kington, taking in most of the picturesque black-and-white villages along the way, each of which having its own distinctive character.

Leominster itself, dating back to the seventh century, is a bustling market town with a wealth of historic and half-timbered buildings amongst its usual high street stores.

We stayed the night at the Talbot Hotel in the centre of the town, where its oak beams, wonky ceilings and creaky floorboards delighted us.

We settled in with a few bedtime drinks in front of the open-log fire in its cozy lounge, before retiring to our comfortable en-suite bedroom where we discovered the disadvantage of staying in the middle of this busy town is that late-night revellers obviously had a good time!

However, we survived and enjoyed a wonderful breakfast that set us up for the day’s exploration, following the well-marked brown and white tourist signs.

The first village we came to was Dilwyn, a small village with an impressive church and a cluster of black-and-white houses surrounding the village green. With the sun shining, this little village is picture-postcard pretty, and we were relieved to see that modern houses were built in the black-and-white style to preserve its beauty. 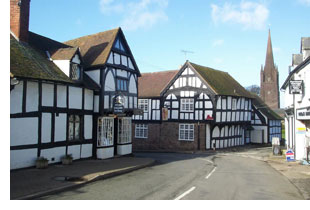 From Dilwyn, we went on to Weobley. From the moment we approached, past a fascinating ‘pink-and-black’ house, it was obvious that this particular village is something really special.

Practically every house in the main part of the village is black-and-white. Until 1943 Weobley boasted a lot more of these old houses, but several were destroyed in a disastrous fire. Fortunately, there are enough left to be appreciated.

The craft shop just down from the inn has a lovely selection of goods which can considerably lighten your purse, as well as satisfy your hunger with a variety of home-cooked goodies.

It was in this village that, for a mere £450,000, we could have become the proud owners of a fabulous seven-bedroomed property, with three sitting rooms and various outbuildings all set in an acre of gardens, that was a favourite place of King Charles I. If only!

Reluctantly leaving Weobley, we headed to the next main village on the trail, Eardisley. Black-and-white houses line the main street of this village.

There is also a church to visit, with a depiction of an incident that happened to the Baskerville family of the area. It is from a local ghost story of a black hound that Sir Arthur Conan Doyle found the inspiration for the Sherlock Holmes story, The Hound of the Baskervilles.

We stopped for a light lunch in the Tram Inn at the end of the main street. This quaint old pub is typical of those in the area, with wonderful old beams, crooked walls, floors and ceilings.

The décor matches the period perfectly and there is a lovely picture of a witch on the wall alongside the gorgeous log fire. When we asked, we were told that this was the landlady, in costume for her small part in a Harry Potter film!

From the pub carpark, we made a quick detour up the lane towards Woodseaves. About a mile up this lane there is a signpost, Great Oak. Turn in and you are faced with a massive oak tree, approximately 900 years old and said to be the oldest in England. The trunk is so huge that it would probably take ten people linking hands to reach around it!

Back on the main road, we headed to Kington, which is situated on the western side of Offa’s Dyke marking the original boundary between England and Wales over 1200 years ago.

Pembridge is the next main village on the trail. Its main street has clusters of black-and-white buildings throughout its length, many of which are so bent out of shape that it’s a miracle that they’re still standing!

Here again, we saw that sense has prevailed and modern houses are built in the traditional style so as not to spoil the ambience. There are over ninety listed buildings in Pembridge, including the old market hall dating back to 1520.

Behind this is the ironically named New Inn, which used to be the courthouse and actually dates back to the early seventeenth century! The west window of the village church portrays fourteen gospel scenes and once provided a refuge for the villagers during Welsh border raids in the Middle Ages.

The last main village on the trail is Eardisland which, in 2004 was claimed to be the prettiest in Herefordshire. Eardisland is the proud possessor of the only-known pre-war AA box, which is displayed in the centre of the village.

The gorgeous old houses that surround the bridge over the river Arrow at the end of the main street are certainly picture-postcard worthy. There is a recently restored seventeenth-century dovecote providing information about the village.

The beauty of visiting this area is that it is easily traveled on a daytrip, or you can take your time feasting and sleeping in any of the villages. It is easy to relax in the olde worlde charm that prevails.

History surrounds you – after all, some of these dwellings are mentioned in the 1086 Domesday Book!

We are definitely going back!

Photos by Andy Clement:
1: Leominster, and the The Three Horseshoes Inn
2: “Downtown” Weobley
3: View of Eardisland from the River Arrow