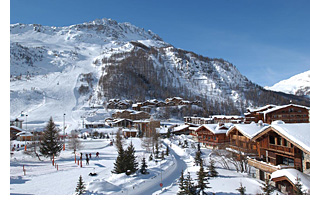 At the top of the 9,275-foot Rocher de Bellevarde peak on a crisp day, surrounded by the majestic panorama of the snow-capped Alps, I looked down the slope where Jean-Claude Killy entered his name in the annals of ski history and it didn’t seem so daunting. During the 1968 Winter Olympics, the Frenchman won the downhill race here in just under 2 minutes, riding on skis that were prehistoric compared with today’s high-performance gear. So how long could it take me? A taxing, 20-minute descent on the aptly named Face Olympique de Bellevarde slope left me gasping for breath and my ego cut down to size. But one doesn’t have to be a world-class skier to enjoy Val d’Isere — the creme de la creme of the French Alps and one of the best late-season ski resorts in the world.

Nestled between regal peaks close to the Italian border, the tiny village of Val d’Isere is home to what the locals proudly call le plus bel espace de ski du monde (the most beautiful ski area in the world).

And this might not be an exaggeration. From the top of the slopes skiers can take in the tallest peak in Europe at 15,774 feet, the elegant Mont Blanc, rising to the northwest. The downhill view is equally picturesque, with sparkling slopes that lead to a dammed lake. 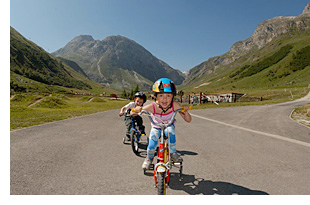 Val d’Isere was first settled by a Celtic tribe in a valley that later became a main thoroughfare for commerce during Roman rule. It earned its current name in the 17th century, when locals built a church whose octagonal spire still stands as a landmark. With the installation of the first ski lift in 1936, so began Val d’Isere’s transformation from hunting station to a mecca for winter sports.

The resort features two ski areas – Val d’Isere and Tignes – which together comprise Espace Killy, named for Mr. Killy, who grew up here and won three gold medals at the 1968 Olympic Games. There are 90 lifts, including an underground funicular, which take you to 196 miles of downhill slopes and 27 miles of cross-country trails. Travelers could ski for a week without visiting the same route twice. 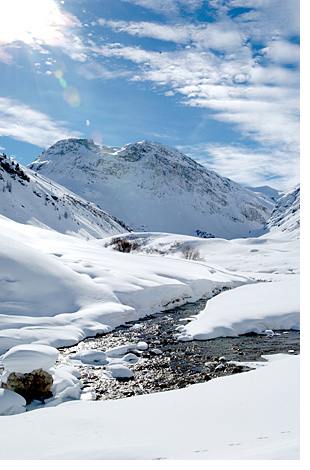 Val d’Isere is also renowned for offsite skiing with a range of terrain and exposures. Not all options offer safe conditions on the same day, but the place is so big that skiers will almost always find a good spot. Make sure you have the right equipment and know the snow and weather forecasts before venturing on unmarked runs. It may be wise to hire an experienced mountain guide.

This year the season runs between Nov. 26 and May 8, but skiing on the 11,335-foot Grande Motte glacier begins a month before and ends a month after the rest of the area. The resort gets an average of 20 feet of snow a year and plenty of sunshine. The high altitude all but guarantees good snow early and late in the season, which allows travelers to take advantage of better prices.

Although Val d’Isere is in France, American skier Lindsey Kildow is a local darling and the proud owner of a cow she received from local cheese farmers after winning a World Cup downhill race in Val d’Isere last year.

World Cup events are yearly affairs in the village, which will also host the World Alpine Skiing Championships in 2009. (The resort now has two Olympiads under its belt, having hosted races in 1968 and 1992.) Val d’Isere is nearly as celebrated for its nightlife as for its mountains. Revelers choose between posh nightclubs – techno music reigns here, as it is, after all, Europe – and rowdy bars such as Dick’s T Bar or a beer-and-pool joint staffed by Danish women, Le Petit Danois.

The resort offers accommodation choices for everyone, from cozy chalets at the foot of the slopes to luxury hotels on the main road to no-frills hostel-style establishments sprinkled throughout the village. For those who can afford the $500 a night for a double room, the best hotel is Christiania, although the luxury chalet the Eagle’s Nest has its fair share of fans.

Variety is also le mot du jour when it comes to culinary offerings, which range from upscale restaurants to pizza joints.

For a lunch break on the mountain, sample local cheese at La Fruitiere or sausages cooked in white wine at Trifollet. In the village, try Le Canyon’s fondue — beaufort cheese that is slowly heated on a tabletop grill and eaten with small bits of bread.

But don’t arrive at restaurants minutes before the posted dinnertime in an attempt to snag the best table. Although the staff will be on the grounds and ready to receive customers, they will typically refuse even to serve drinks at the bar and invite you to wait outside in the snow until the precise time advertised.

The only downside to Val d’Isere is that it is not easily accessible to those departing from North America. The most convenient route is a flight to Geneva, followed by a 4 1/2-hour bus ride.

A still longer, but more fun, route is to book a flight to Paris, and then board the overnight Snow Train ($415 through RailEurope), which is legendary for its disco carriage, where passengers can dance while the train speeds toward the mountains. The train goes to Bourg Saint Maurice, where travelers transfer to a local bus for a 30-minute trip to Val d’Isere.

You will congratulate yourself for overcoming the grueling journey when you finally get up the mountain, point your skis or snowboard downhill and feel the crisp Alpine air caress your face and your heart pump faster as you follow in Mr. Killy’s immortal tracks racing down Face Olympique de Bellevarde.

Photos by Val d’ Isere Tourism:
1: Overview of the Val d’Isere area
2: Summer fun is also enjoyed throughout the area
3: Back country in winter