The Brontë sisters have been a fascinating curiosity since publishing their work under the genderless pseudonyms Currer, Ellis and Acton Bell in 1846. Respectively, Charlotte, Emily and Anne went on to write some of the most well loved novels of their time. Emily’s Wuthering Heights smashed purist morals with its rough language and passionate characters; Charlotte’s Jane Eyre ignited independent spirits and disarmed conservative thinkers of the day; and Anne’s The Tenant of Wildfell Hall was set around a feminist theme rare for her time.

When it was found out that the authors of these stories were three daughters of a clergyman, interest in their lives was piqued. The early deaths of both Emily and Anne added to the allure of the authors. Tourists began visiting the hometown of the sisters while Charlotte and her father were still alive. 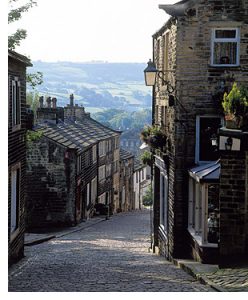 Haworth, Yorkshire, was a small but crowded village sustained by the working poor in the local textile mills, with over one third of the population working in the industry.

Elizabeth Gaskell, Charlotte’s official biographer and acquaintance, described it as a grim place with bleak weather and blustery winds. Health reports from this time inform us that the village suffered from a lack of a drainage system, which contributed to outbreaks of cholera and piles of human and animal waste in the streets.

The vision of Haworth today is a much more romantic one. Settled atop a steep hill in Yorkshire, England, it has attracted more than seven million visitors to its still-quaint streets and Brontë-themed activities.

The Black Bull, King’s Arms and White Lion Inn, all popular in the mid-1800’s, still serve customers today, and Main Street is kept in tidy condition for picture perfect snapshots.

Although the village has been developed and the population grown, the buildings are well preserved and visitors get a real sense of the Brontë’s time from the active work of its citizens and the Brontë Society. 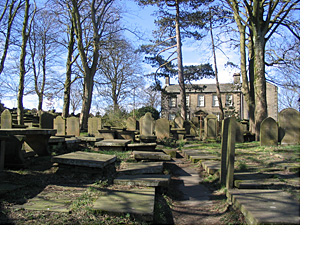 The parsonage where the girls grew up has been carefully converted into the renowned Brontë Parsonage Museum. Each room is filled with furniture and the belongings of the family, creating the atmosphere that most closely resembles what their lifestyle would have been like.

The often described dining room, where the sisters did most of their writing, is laid out just as one would imagine. A wooden table sits in the middle, which the sisters used to walk around in the evenings discussing their work.

Charlotte’s room is the most fascinating because of the display of one of her sombre dresses and shoes, conveying just how petite she was. The kitchen was another important room for the Brontë family, where the fire kept them warm on cold Yorkshire evenings.

During the day, Emily could be found here helping to bake bread while studying German from her propped up book. In the evenings, one of their servants, Tabby Aykroyd, would tell them dark tales about the surrounding moors that no doubt crept into their writing.

The Georgian home is simply furnished and attentively arranged to the smallest detail. The long-case clock that Mr. Brontë used to wind up every night at 9 p.m. stands halfway up the stone staircase.

On display are some of the hand-made books, so exquisitely tiny, a magnifying glass is almost required to read the words. The museum is filled with original manuscripts, authentic furniture, books from the Brontë’s library, and objects that the family used. Walking amongst these treasures and within the parsonage walls gives the closest connection to the sisters themselves than anywhere else in the world. 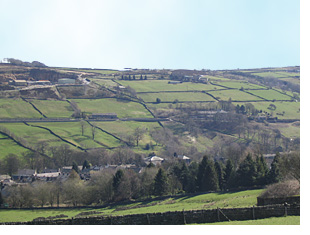 For the most devoted fans, what is now called Brontë Country spans from Bradford to the Lancashire Pennine moors. This area was explored by the sisters throughout their lives, becoming a large part of their novels. Here are the most celebrated sites that have Brontë associations:

Wuthering Heights
– Top Withens, near Haworth, is typically credited as the inspiration for the Earnshaw’s turbulent home
– Ponden Hall is located on the Pennine Way, near Stanbury, and is thought to be the origin of Thrushcross Grange

Jane Eyre
– Pendle Witch Country contains Wycoller, believed to have been Ferndean Manor
– Cowan Bridge, close to Ingleton, is the controversial village that housed Lowood School
– Norton Conyers, a nearby country house, is said to be the inspiration for Thornfield Hall

Shirley
– In Kirklees, Oakwell Hall resembles Fieldhead and Red House is thought to be taken from Briarmains

Other Related Sites
– Thornton, the birthplace of Charlotte, Branwell, Emily and Anne
– Gawthorpe Hall, near Burnley, was a common visiting place for Charlotte during the latter part of her life, where she stayed with the Kay-Shuttleworths
– Scarborough is the death place of Anne, where her grave still rests
– The Brontë Waterfall is a 2 1/2 hour walk from Haworth’s Main Street, a spot the sisters used to visit often.

If you go:
Bradford Tourism provides detailed information for all travel needs on Haworth and Bronte Country www.visitbradford.com/bronte-country.