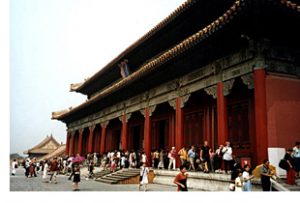 Arriving in Beijing to a more modern airport than I’d naively expected, I wondered whether we really needed the guide I’d booked over the ‘net two days before.

Rebekah’s English was excellent and, but for an unnerving habit of spontaneously singing between sentences, she made us feel at ease in this most different of countries, dropping us off at the Capital Hotel to rest before our sightseeing began the following day.

We would have preferred a lazy start but, jet-lag or not, I’d booked this guide and we were going to use her. So at 9.30am we dragged ourselves into the lobby for our first day out.

After a short ride, we jumped out of our air-conditioned mini-bus, into the morning throng going about its business. It was 36 Celsius and humid. The smell of smog that would become so familiar was hanging in the air.

Construction of the Imperial Palace was started in the 15th century, during the Ming dynasty. As it was home to the Emperor (during the winter at least – he had another palace for the summer) it was closed to the public, so became known as the Forbidden City.

It is still the largest palace complex in the world, stretching a kilometre from north to south, and almost far east to west. There are said to be 9,999 buildings inside (we didn’t count them), containing much of China’s most important art.

Rebekah began to earn her fee when she took us inside the ‘city’ walls. We were glad we didn’t have to queue for tickets, and that we had someone on hand to explain things and answer our questions. Like the figurines on the corners of the pagoda roofs which increase in number with the importance of the person who resides there.

There were more and more as we approached the centre of the complex where the Emperor would once have stayed.

Later we exited straight onto Tian’anmen Square which, for our lifetimes at least, will always be associated with the uprising of 1989 – referred to here as simply “June 4th”. Another huge area, but this time open and bordered not by walls, but by a great multi-lane ring-road it would be foolish to cross any other way than the subway – yet some try.

In one corner, Mao’s Mausoleum with a perpetual queue of the faithful waiting to catch a glimpse of the man’s preserved remains inside. Some years ago – Rebekah told us – the Mausoleum was closed “for refurbishment”. When it reopened it apparently looked little different, except for Mao himself who looked a little less…dead.

Our second day was the classic trip to the Great Wall at Badaling. The children felt better, but none of us was prepared for the crush. Our concept of ‘personal space’, which we don’t notice until someone invades it, doesn’t exist in China – as you might expect of such a populous country.

What we couldn’t avoid was the crowd snaking its way up and down over this historic monument. At intervals, there are towers through which tiny tunnels lead onto the next section of the Wall.

It was scary being in the middle of one, knowing that there was no way in or out, except to be carried along on the tide of humanity that had made the same pilgrimage. They say in China that a man is not a man until he has visited the Great Wall. An awful lot of men were made that day.

Westerners are still a rare sight in Beijing and western children unheard of, so we drew a lot of attention wherever we went. In the Forbidden City, people stopped us and gestured with their cameras at our perplexed children. 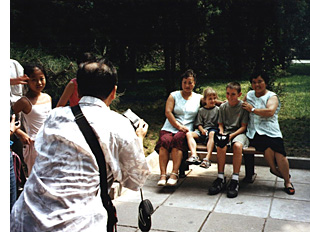 Usually they had children of their own and, if proof were needed that children everywhere are alike, they looked as embarrassed as you’d expect your own to be if asked to pose with a couple of complete strangers.

You could see “What for?!” written on their faces, without having to understand a word of Mandarin. Meanwhile, Brett and Beaulea were pleased with their new celebrity status, even if they didn’t understand it.

The Capital hotel proved to be a good base for walking around the centre of Beijing. 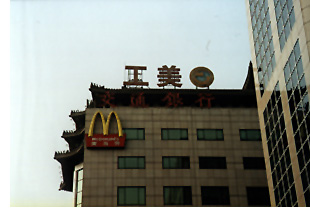 Five minutes from Tian’anmen in one direction, and in the other, just a little longer to the shopping district of Wang Fu Jing, where the incongruous, yet somehow unsurprising sight of a McDonalds greeted us.

Here we found the malls where the young and beautiful of Beijing come to spend their money.

Our first trip out on our own was to Beijing’s famous zoo. After negotiating the city’s underground railway, we found our way to the entrance. Inside, the world’s largest zoo was quite a depressing place.

There was lots to see, but the animals did not look happy or looked-after. I don’t recall seeing anyone giving them food or water on this scorching summers day. After an hour or so, we had to find shelter ourselves, so we sat on a bench in the shade.

Within seconds, a young couple stopped to ask if they could photograph our children. We politely obliged, only to notice a queue forming behind me. I could’ve charged a dollar a go and paid for our tickets!

Beijing is a city of enormous contrast and rapid change. New property is as expensive as London or New York, old property is as poor and simple as can be. Preparations for the 2008 Olympics mean it is being remodelled into a city much like any other.

Go now before it loses some of its character. And take your kids!

Photos by Steve Holcroft:
1: Visitors crowd the entrance to the Forbidden City.
2: The author’s children pose for a Beijing photographer.
3: McDonalds just seems to be everywhere.