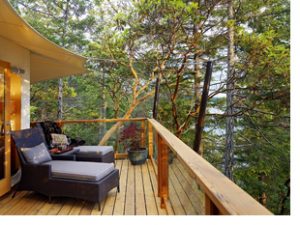 Long known as a sleepy strip of land where many an older couple has aired out the kids’ empty rooms and hung a “Bed & Breakfast” shingle out front, British Columbia’s Sunshine Coast is finally coming into its own and delivering new or upgraded accommodations that offer luxury, serenity and proximity to the elements.

Mistakenly considered an island by many, the Sunshine Coast is in fact connected to Vancouver’s Lower Mainland – only problem is, there are no roads that lead to it.

As a result, the only way to get there is by boarding a 40-minute ferry from Vancouver, a trip that lends this strip of land an isle-like sense of blissful isolation.

The Coast’s activities are many – from terrific hikes to kayaking, fishing, wildlife viewing, or visiting the galleries and eclectic mom-and-pop stores that pepper its major centres.

There’s lots to do on the Sunshine Coast, – the only question is this: when it comes to bedtime, how close to the elements do you want to get?

The evening my husband and I arrived on the Sunshine Coast, the rain was pounding down and the surf was thrashing against Ole’s Cove, a quiet inlet 45 minutes from the ferry terminal in Langdale.

It couldn’t have been more perfect.

Surrounded by the majesty and power of the elements, we were to spend the night sequestered in a tenthouse suite at Rockwater Secret Cove Resort. Sure, sunshine and blue skies are pleasant. But to really appreciate how close you are to nature, there’s nothing like a good storm.

Kevin Toth and Peter Rubin purchased the resort previously known as Lord Jim’s in 2004, knowing all too well that with its tired seaside cabins, it needed a new lease of life if it was to survive far into this century.

One of its best vantage points was the peninsula, a rocky outcropping where old growth trees, their roots covered with reindeer lichen, cling defiantly to the hillside, offering an extraordinary view of the cove.

Worried about the destructive environmental impact of building hillside cottages, they came up with a better solution: tenthouse suites. The creative pair designed and patented aluminum-framed tents, complete with fire-retardant canvas, luxurious interiors, plumbing, hot water and electricity, and set up 13 of them overlooking the water, at $87,000 a pop.

Deluxe-style camping, the 13 suites offer a tent-like experience, but without the penalties of having to ‘rough it,’ even for a second. 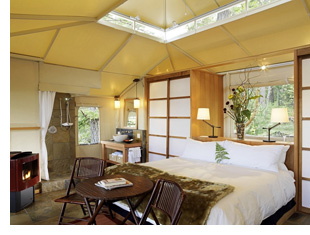 Inside the canvas walls of a 320-square-foot enclosure, expect slate floors with radiant heat, a Jacuzzi bathtub for two, flush toilets, a comfy king-size bed with down comforter and pumped up pillows and securely locked doors.

There’s a coffee maker and kettle for a hot drink in the morning, a propane fireplace to warm the cozy room, hot water in the slate-tiled shower and every luxury – thankfully with the exception of a television – you’d anticipate from a five-star hotel, even down to the room service.

Only thing is, you’re in a tent – sort-of. That means, when the rain comes down, as it did the night we slept in the cove, you hear every last drop.

Between the downpour, the wind and the pounding surf, there was an orchestra of sound that night, which adds dollops of romance to an extraordinarily cozy, intimate accommodation.

“This past winter, the weather could not have been worse,” Toth confided over dinner. “It sounded like the world was coming apart, it was blowing so hard. I took a walk late at night to check on the tenthouse suites, and though I could hear tree branches snapping nearby, there was no damage to the tents.”

That could be thanks to the arborist who inspected the trees before the tenthouses were constructed, advising which were in danger of falling in upcoming storms, and should be removed.

The tenthouses are accessed by a treetop boardwalk, surrounded on both sides by forest. The wet bark of Arbutus trees gleams in the early evening, and the branches of old Douglas Firs are heavy with moisture, releasing a fresh, invigorating scent into the air.

The boardwalk is your passage to and from the real world. Back at the resort, the white tablecloth restaurant hums with activity as Chef Steven Ewing prepares such delicacies as sesame crusted Pacific albacore tuna with wasabi kewpie aioli, followed by caramelized lemon sabayon tart. 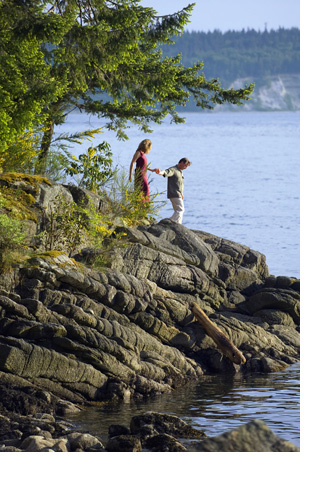 There’s no urgency to go anywhere once you arrive at Rockwater. A game of Scrabble, a good book and a pair of binoculars are all you need to pass the time.

But if you feel the need to get up and go, the resort can arrange a variety of activities, from Scuba lessons in the swimming pool, and later a dive in the cove, to spa treatments. On calm days, you can rent a kayak and paddle around the perimeter of the rocky island, or hop in the car to explore some of the neat galleries and stores that pepper the coast.

But it’s hard to resist the temptation of curling up with your partner beneath the comforter, especially when you find yourself in the midst of a winter storm.

The fireplace crackles, the wind whips the canvas, and though you’re ensconced in the lap of luxury, you can’t help but feel like in the tenthouse suite, you’re on an exciting adventure, a grand gesture of defiance against the elements.

Photos courtesy of Rockwater Resort:
1: The view from a deck high up in the trees.
2: The luxurious interior of one of the tenthouses.
3: A couple takes a stroll on the rocky shore.

For more information call (877) 296-4593 or visit www.rockwatersecretcoveresort.com. The tenthouses are perfect for couples, but if you’re keen to venture out with the family, the old seaside cabins are still available this summer.

BC Ferries offers regular service between Horseshoe Bay and the Langdale ferry terminal on the Sunshine Coast. Visit www.bcferries.com or call (888) BCFERRY. Reservations are highly recommended, particularly on weekends and in summer months.