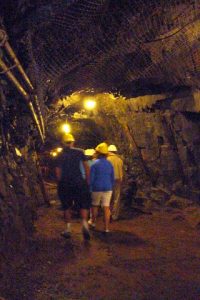 “Be sure and wear a hard hat, and be careful where you step when you’re walking inside the tunnel,” the mining guide warns as I board the little train that will carry me and another group of tourists into the deep tunnel under the mountain.

I’m in a tunnel at the Britannia Mine Museum, site of one of British Columbia’s historic landmarks, and an easy day trip from Vancouver. How many hundreds of times have I passed the site on trips up the Sea to Sky Highway on my way to Squamish or Whistler? But this day I have come for a tour through the new mining museum, opened in mid September.

The mining guide, Annike, is kitted out in full miner’s gear: coveralls, gloves, boots, and helmet.  As the train pulls into the dark tunnel, the only light is from its headlight and the lamp on her hard hat.  She swirls it around, beaming it against the tunnel wall that shines with seepage of coppery water and patches of green patina.  The air is cold, and smells acrid.

Britannia Mines was once the biggest copper mine in the British Empire.  The mine’s story began back in 1888 when a Scottish doctor, Alexander Forbes, happened to discover a patch of mineralized rock while prospecting at Britannia Beach.  This led to the opening of the Britannia Mining and Smelting Company six years later, with mills capable of producing 2,000 tons a day.

There are 210 km (150 miles) of mining tunnels in the mountain. The little train takes us deep into one of them where we disembark and make our way along the tracks and rough ground of the tunnel.  The mining guide demonstrates the use of equipment including drills and sticks of dynamite the miners used to blast into the rock.

“The miners used only candlelight back in the early days,” Annike explains, “so often the crews who came to dig after the dynamite was set, couldn’t see it, and this resulted in fatal explosions.  After that, they painted the ends of the dynamite plugs with various colors so they could be seen.”

We stand for a few minutes in the pitch black darkness.  Then the dim lights are turned on again and she warns us to plug our ears while she demonstrates the loud sounds that were made by the machinery and drills.  It’s hard to imagine the miners enduring these kinds of conditions.

Back outside, we tour the various mining exhibits including core sheds where samples taken from the mine are stored.  The 20-storey Mill building is one of the last remaining gravity-fed concentrator mills in North America.  It was restored in 2007 with each of the 14,416 panes of glass hand-puttied into the frames.  The aim of the mining museum is to promote mining awareness through fun, experiential education programs and to preserve important historic mining artefacts.  The Britannia Mine Water Treatment Plant represents Britannia’s environmental remediation plan implemented after the mine’s acid rock drainage impacted Howe Sound.

When the mine first opened, a small community of miners and their families grew up on the mountainside.  Men and women came from all parts of the world to live and work in the mine. Known as “Jane Camp,” a tragic rock and snow slide destroyed it in 1915 killing 56 men, women and children.  A safer town site was built 2,000 feet below the original town and was known as “Mount Sheer.”  You can still see the remains of the 135 steps people climbed to reach a flat-deck rail car that took them up the mountain to another small train that transported them to the town.  In the mining museum there are displays and photos of the life of that mining town, along with testimonials by former residents.  The town thrived for several years. It had a library, clubhouse, a hospital and schools.  Britannia Beach was only accessible by boat from 1904 to 1956, a two-day trip. Eventually, in 1956, the railway went through and two years later the highway was built, so residents moved down from the mountain and Mount Sheer was abandoned.

The mine operations shut down in 1974 due to economic problems. Since 1988 Mill B was designated as a National Historic site, and is considered to be one of B.C.’s important historic landmarks. The Beaty-Lundin Visitor Centre is a brand new building that houses some theatrical mining exhibits, a mineral gallery and the Canadian Mining Hall of Fame where you can learn about Canada’s mining pioneers.

After the mine tour I tried my hand at gold panning. The mine used to produce a small amount of gold as well as the copper.  No luck this day, but it’s a fun activity for the kids.  There’s also a mining themed children’s play area with toy diggers, trucks and hoppers .

The Britannia Mine Museum is open seven days a week and offers guided tours. Located on the scenic Sea to Sky Highway just a few kilometers north of Vancouver near Squamish,  it’s a perfect outing for all members of the family. It’s operated by a non-profit organization that promotes mining awareness through fun and educational programs.

This tour was made possible with thanks to Yvonne Chiang, Media contact for Britannia Mine Museum.

About the author
Ruth is a travel journalist with a strong interest in history and archaeology. She is a frequent traveler and has lived several years in Greece. She  facilitates writing groups in New Westminster and at Brock House. and  edits and publishes a travel e-zine Travel Thru History.  Ruth also writes historical fiction and her novel, “Shadow of the Lion” which is about the fall of Alexander the Great’s dynasty was published in two volumes by MediaAria-CDM, Bristol Eng. The full version will soon be published on Amazon Kindle.  She currently writes for EuropeUpClose and freelances for several other on-line travel ‘zines as well being publishing in Senior Living magazine and several anthologies of both travel and poetry.  www.ruthkozak.com