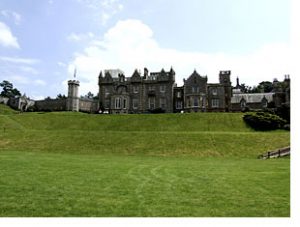 For anyone who loves Sir Walter Scott, Abbotsford is a place of pilgrimage. I arrived there on a drizzly afternoon in early September, crushing sodden leaves underfoot and tightening my scarf against a gale. The ground was like a sponge, and dark clouds that could have been painted by Constable rolled across the sky. On such a day, in the midst of dense forest, I could easily have been in early Norman England, in the landscape of Ivanhoe.

The Borders – that no-man’s land between Scotland and England – is the best place on earth to encounter the Wizard of the North. It is a wild and rugged landscape, historically lawless and the home to feuding clans loyal only to themselves, with their own dialects and customs.

Walter Scott knew it like the back of his hand, and its uniquely romantic atmosphere and violent associations suffuse his works. It was here that he built his dream home on the proceeds of his fantastically successful career as the first ‘historical novelist’.

He even got to enjoy it for a few years, before a disastrous financial speculation forced him to spend the rest of his life paying off what he regarded as debts of honour – what a guy.

I trudged past the empty tea rooms with mounting excitement and after the next bend in the track found myself before the holy of holies: that splendid Gothic folly that is Abbotsford. 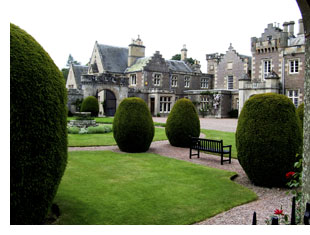 It is not so much a castle as a large manor house decorated with battlements and gargoyles.

It is a place on which much love as well as money was lavished, and the temptation to sneer at the toys and baubles of the rich and famous is held in check by the knowledge that Walter Scott was born without privilege, worked incredibly hard all his life, brought and still brings joy to millions, and was more entitled than most to indulge himself a little.

‘Well, alright then – quite a lot, on this occasion,’ I admitted as I crossed the threshold and found myself slap in the middle of a Gothic fantasy: the Entrance Hall prepares you for what’s to come, with its huge stone fireplace and the helmets, breastplates and coats of arms stacked along the walls. This was clearly the home of a man in love with the past, and with living on a grand scale.

The wonder is that he ever got any work done at all. Surrounded by such luxury and so many distractions I wouldn’t have been able to concentrate on my writing for more than ten minutes at a time, let alone churn out the great quantities of books for which Scott is famous.

He wrote the Waverley novels here, and received guests who included the likes of Byron, Wordsworth and Washington Irving.

The study is the sort of room that most writers fantasize about having but know they’d never get any work done in it: the big leather chair behind the solid writing desk (made from pieces of wood from the Spanish Armada); the books lining the wood-panelled walls; the marble fireplace.

Intriguingly, two secret drawers were discovered in the desk in 1937, and in them were 57 letters written between Sir Walter and his wife before and after their marriage. The books themselves are a bibliophile’s dream: there are nine thousand of them, housed in the study and library. Also in the library is Napoleon’s cloak clasp of golden bees, which was found in his carriage after the battle of Waterloo.

But the room that has the most immediate impact is definitely the Armoury. You could kit out a small medieval army with the stuff in here, and most of it is on the walls. 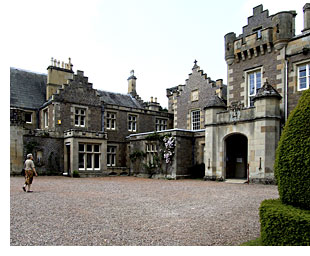 Many of the pieces have historical connections, so consult the guidebook as you crane your neck at the flashing steel. Amongst other manly equipage, there are Sir Walter’s blunderbuss and pistols; Rob Roy’s sporran purse, dirk and broadsword; James VI’s hunting bottle; and the keys of Lochleven Castle, thrown into the loch after the escape of Mary Queen of Scots.

Moving on, as they say, we come to the drawing room. Now, in common with most British stately homes, it is difficult to imagine people actually relaxing in here.

The chairs are stiff and formal, and the Chinese hand-painted wallpaper I’m afraid reminded me of long, boring Sundays at my Gran’s house when I was a child.

This room, in common with the rest of the house, contains gifts presented to Sir Walter by the great and the good: a writing desk given to him by King George IV, an urn presented to him by Byron, a portrait of him by Raeburn. Actually, in this portrait, which hangs over the fireplace, he looks positively fed up:

‘Is this it, then?’ he seems to be asking. One of his dogs is trying to cheer him up, and the other has lost interest.

Scott was a compulsive collector, and filled his house with such objects, which is all very nice for us – but I can’t help thinking that all the snuff boxes, suits of armour, paintings and assorted memorabilia were really just a sort of side-show, and that he felt most alive and fulfilled when he was immersed in the writing of his novels.

With this in mind, I decided to take a final look at the study before leaving. It was here that the books were written, and where Scott’s presence is most tangible. I felt an almost overpowering urge to sit in that famous chair, if only for a moment.

But I managed to resist, out of respect as much as anything else: it would be like leaning against the altar in a church.

Facilities:
Car and coach parking
Disabled car parking
Available via the private/staff entrance 200 yards [650m] west of the main car park
Public rooms are all on one level, and can easily be viewed by wheelchair users. Ramps are provided into the garden.
Picnic area in the garden
Tea Room
Gift Shop
Toilets [including disabled]