Story and photos by Habeeb Salloum 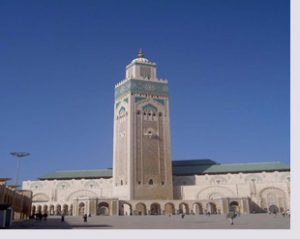 “Let’s go and see the late King Hassan II Mosque”, is usually the first suggestion a host offers visiting friends when planning a sightseeing itinerary of Casablanca – Morocco’s top commercial and industrial centre. Dwarfing any human proportions, this newly built Islamic house of worship towers above Casablanca’s old medina (Arab type town) like a guardian angel. Rising like some kind of divine ship, it is built in the city’s heart on the seashore – the most western point of the Islamic lands. When one looks up at its exquisite dominating minaret, the mysteries and lure of Humphrey Bogart’s Casablanca are multiplied.

Called by the Moroccans, who take genuine pride in the structure, ‘the eighth wonder of the world’ it is a high-tech mosque built in memory of Muhammad V – the father of modern Morocco.

Regal, Islamic and popular with the majority of Moroccans who call it ‘the entire nation’s dream’, this huge structure, which cost some $600 million to build, can be seen from almost any part of the city.

From the air, the mosque, dominating the city, adds a new and inviting dimension to this ultra modern wealthy city with a population of around 5,000,000. Filled with wide tree-lined boulevards, ritzy shops, splendid villas, dazzling white buildings and, of course, littered slums, Casablanca, with its stunning architectural beauty and its new symbol has come a long way since 1900 when it was only a small town of 27,000.

Casablanca was established by the Phoenicians as the hamlet of ‘Anfa’, but remained a backwater town for hundreds of years.

From the 16th to the 18th century, for a period of 180 years the Portuguese occupied the city. They who renamed it Casa Branca – later changed by the Spaniards who had been given import privileges in this small port to Casablanca. The Moroccans translated the name to the Arabic Dar el Baida, but internationally it continues to be known as Casablanca – even the Moroccans refer to it as ‘Casa’. 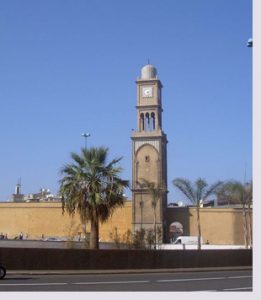 In 1921, the French who were ruling Morocco at that time, built a new medina called Al Habous, making Casablanca the only city in the country besides the old, has a new medina built along traditional lines. At the same time, the harbour was expanded until eventually it became the largest port in Africa. National and international businesses set up offices in the city and an impressive expansion, which has never slowed down, was put into motion, creating a huge metropolis, bursting at the seams.

Today, it is the largest and chief industrial city in North Africa. Here is where international business dealings take place and where 60% of the Moroccan companies are based. Called the shining light of modern Morocco, the city is the home of high tec industries, top class hotels, and it is the urban centre where luxury goods and services flourish.

Here, one can discover the spirit of old Morocco in the medina, a few minutes walk from Place Mohammad V. Here, in original Casablanca, is located the Mausoleum of Sidi Allal El Karaouani, patron saint of the city, surrounded by exotic souks overflowing with Moroccan handicrafts.

Also, from Place Mohammad V all the main thoroughfares fan out. Along their edges luxurious hotels, restaurants, all types of shops and pedestrian only malls filled with humanity make the area the throbbing heart of the city.

One of these avenues, Hassan II, leads to Place des Nations Unies, the largest and most attractive square in the city. On one side are located the main post office, the Palace of Justice and an attractive theatre – all built in the appealing Andalusian-Moorish style.

On the other is a huge luminous fountain whose splashing waters produce the colours of the rainbow. Nearby is the eye-catching Arab League Park with its hundreds of towering palms. The whole area, built during the French era, is a modern version of Morocco’s traditional magnificent structures.

A short taxi ride away is the new medina (Al-Habous), famous for its Mahkama (Court of Justice) built in the exquisite Andalusian-Moorish style; the rambling Royal Palace; and the Joutiya – a large colourful handicraft market where top artisan products can be found. 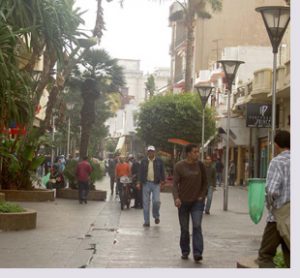 If one is seeking fun and relaxation, past Hassan’s Mosque is the Corniche with its fine beaches. The heart of the area is Ain Diab, crowded with hotels, sidewalk cafes, nightclubs and excellent restaurants where travellers can linger over tasty meals in dream-like settings.

Up behind is the upper class residential section of Anfa. Its wide flowery avenues and attractive gardens are edged by some of the choice villas and palaces to be found in Morocco.

The area is in sharp contrast to some other sections of the city where slums teem with humanity, barely able to eke out a living. Yet, for a few beggars, the people, like those in the affluent sections, are friendly and hospitable to strangers. Here, as in all other parts of the city, language is no problem.

Everyone, even the children, speak at least two or three tongues – an ideal atmosphere for businessmen and tourists alike.

Facts About Casablanca and Morocco: