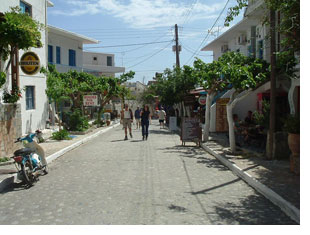 In the old Venetian part of Hania, in Crete, I saw a pair of shoes I really liked. Or rather, one shoe … the left one! The other one was in a shop on the second floor, at the top of a steep flight of stairs. That particular day, I was trying to avoid stairs. But they were really nice shoes, so I lurched up them with all the grace of Frankenstein’s Monster. The shop assistant was all concerned, until my wife, Lorraine explained everything with one word. Samaria!

At about 18 km. long, Crete’s Samaria Gorge is the longest in Europe. Its floor is stony, and strewn with gigantic, flood-borne rocks. But, it’s fairly easy going, and can be managed by all but the most unfit.

Nevertheless, Lorraine took one look at pictures of the gorge, and decided to explore another, the Therissos, in the comfort of one of the many ‘land trains’ that ply the island.

In spite of the aches and pains, I was glad I’d ‘done’ the Samaria Gorge, because, almost exactly a year before, I was in hospital, wondering if I’d ever walk any distance again. And, I couldn’t have managed those shoe-shop stairs if there’d been a willing brunette with a six-pack at the top of them.

The trouble with Samaria is, once you’ve descended into the gorge, the only way out is by way of Ayia Roumeli, at the other end, either on your own two feet, or, in emergency, on the back of the Ranger’s donkey. Unless you’re prepared to climb back up the steep, stony zigzag path up the side of the gorge. A daunting prospect, which is why most people choose to walk the gorge downhill, to the sea.

I joined one of the tours operated by the many tour companies and hotels on the island. Independent travellers can catch the ordinary service bus to Omalos, at the start of the walk. You can only get from Ayia Roumeli by boat, but you can get a bus back to the main holiday towns from either of the ports to which the boat will take you.

But, a plus side of the organised tours is a guide. Our guide, Patricia, wearing a bright green T-shirt, so we could easily recognise her if we saw her, followed about an hour behind, equipped with a first-aid kit and a radio.

Our party bused to the start at Omalos, high in the Lefka Ori mountains. At the Ksiloscalo (Wooden Steps) Patricia bought tickets to enter the gorge, and handed them out. We needed to show this at the other end; it’s the authorities’ way of checking everyone is out of the park by nightfall – and they told us that if we lost it, we’d have to go back and get another.

Then, down the steep Ksiloscalo, through pine forests, down to the floor of the gorge. The wooden steps are, actually, logs laid across the path, to prevent the stones from washing away. And, those stones are stony!

Once at the bottom, the path winds along the riverbank for most of the length of the gorge. The river itself is clear and potable, but the bone-white boulders in its bed gave some idea of the force with which it can flow in the wet season – naturally, the gorge is closed at this time.

The worst navigator in the world couldn’t get lost in a ravine, I thought … although one family group I saw were trying their best.

By the trail, I saw something familiar yet alien. The ‘Dragon’s Tongue’ flower is so obviously a relative of the cuckoo pint, but this one has a striking, deep purple leaf. Another familiar shape was close to hand; the wild cyclamen – an easily recognisable shape, but much smaller than the variety you buy at the garden centre. 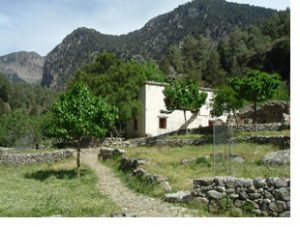 About halfway along the route lies the abandoned village of Samaria. The villagers were moved out and rehoused at Ayia Roumeli, at the mouth of the gorge in 1962, when the Lefka Ori area was declared a National Park.

Some of the houses remain, although in a ruinous state; here there’s a spring and toilets. And here many people, arriving about midday, like to eat their sandwiches in the overgrown but tree-shaded plateia, or village square.

The spring and toilets are only one of seven of each along the route. You can, in emergency, drink from the river, too. But, to keep it so, please don’t use the river in lieu of the other facility! 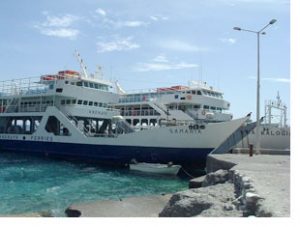 The Iron Gates are the narrowest part of the gorge, and as we approached them, we began to meet people who had taken the easy option of a short out-and-return walk from Ayia Roumeli. They’re so called because of the iron in the rocks, which turns them a distinctive red colour.

At Ayia Roumeli, we were to meet up with Patricia in one of the many cafés, where she’d issue our tickets for the boat, which left at five o’clock. That left me over two hours to kill, and there isn’t much to do in Ayia Roumeli. But Carl, with whom I had been having a sporadic conversation all day as we passed and re-passed on the way down the gorge, solved the problem.

‘Get your own’ he grinned ‘These are both for me! And, the first one, I’m going to pour over my feet!’

Keith Kellett is a freelance travel writer/photographer who makes his home in England. Visit Keith at his website www.travelwriters.com/keithkellett

Photos by Keith Kellet:
1: Ayia Roumeli, the village at the mouth of the gorge, and the end of the walk.
2: The abandoned village of Samaria half way down Samaria Gorge.
3: The ferry Samaria to Sougia. Ayia Roumeli is not accessible by road.

Ferry services from neighbouring islands call at these places and at Rethimo. Regular ferries from Athens (Piraeus) to Heraklion. See www.gtp.gr for details.

Cars and scooters can be hired fairly cheaply, and a good bus service (KTEL) serves most of the island. Since Crete is a popular holiday resort, there’s no shortage of all kinds of accommodation, mostly along the northern coast.

Samaria Gorge
Organised tours are offered by most hotels, or the many travel agencies. Don’t accept the first one you’re offered … shop around. If you want to travel independently, KTEL operate a public bus service to Omalos, at the entrance to the gorge; you can catch a bus back to your accommodation from Sougia or Hora Sfakion, where the boat from Ayia Roumeli, at the mouth of the gorge will take you.

Be advised the only way out of Ayia Roumeli is by boat or on foot! If you’re not planning to stay the night, be sure to complete your gorge traverse in plenty of time for the boat! Camping in the gorge is not permitted.