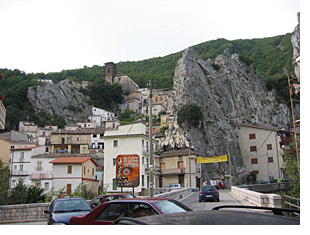 Puffs of soft, fluffy clouds caressed my mouth. The tiramisu flowed down my throat like liquid silk. My friends stared as I licked my lips. Reluctantly, I offered a sliver to Ann, Dan and Phil. Immediately, they ordered their own. I knew I should have started lunch with dessert. We were in the mountain village of Villa Santa Maria in Abruzzo, Italy on the last day of the three day Festival of the Cooks (Sagra dei Cuochi). Each October hundreds of world famous cooks descend upon the cooking institute, Instituto Professionale Alberghiero di Stato, Marchitelli to create culinary masterpieces that compete for prestigious awards.

The Abruzzo region in central Italy stretches from the Apennine Mountains to the Adriatic Sea. Rare Apennine wolves and the endangered Marisican brown bear inhabit ancient forests that have been designated as national nature reserves. The region is blanketed with vast national parks. Indeed, over one-third of the territory is environmentally protected.

Abruzzo is a province that still clings to age-old traditions and superstitions. The culture of the land is reflected in its distinctive cuisine – hearty, earthy dishes infused with aromatic herbs and spices.

Saffron and hot peppers are used liberally. Roasted and grilled meats, particularly lamb and boar are found on menus throughout the mountain towns. The seaside villages along the Adriatic Sea feature a spicy seafood stew, brodetto. The region is known for its maccheroni alla chitarra, square spaghetti that is made on a wooden box strung with steel or plastic wires like a guitar and served with a meat ragú.

From our agriturismo (working vineyard and farm), La Capezzangna, near Pescara on the Adriatic Coast, we sampled the foods of Abruzzo and explored its villages and countryside.

According to an ancient chronicle, Villa Santa Maria originated in 828 with the construction of the Sanctuary of the Madonna in Basilico. In the 14th century, the town was burned down because it rebelled against its feudal lords. It was later rebuilt and was ruled by the Caracciolo princes.

With less than 1500 inhabitants, Villa Santa Maria sits in the arms of a craggy rock formation, La Penna. The village extends into the shallow floodplain of the River Sangro that empties into the Adriatic Sea, 30 miles away.

Rugged, vertical cliffs forced the town’s early residents to build their stone houses and domed medieval church into and around the jagged obstacles. Houses jut out of the cliffs at odd angles into narrow, steep, passageways.

On Via Roma, the rocky, main street of Villa Santa Maria, booths displaying Abruzzo’s regional products – necklaces of salami, rounds of cheeses, aged prosciutto and herb infused sausages – lined the street. Aromas of garlic, fish, and spices drifted towards us from tents with tables that sagged under huge caldrons of food.

Chefs in tall white hats dished out garlicky fish soup, rosemary scented pastas, and spicy stews to the crowd waiting in lines. “Manga, manga (eat),” they yelled. The customers laughed, joked with the chefs and took their plates overflowing with food to tables and benches nearby.

According to one legend, in the 16th century, wishing to escape the summer’s heat, Francesco Caracciolo, a cook from Naples, settled in Villa Santa Maria. He brought with him a love of cooking and a custom of the Neopolitan nobility – a cooking competition that has continued here for four centuries.

Another story claims that the culinary tradition of Villa Santa Maria started in 1560 when Lord Ferrante Caracciolo organized the first cooking school in his castle. He learned the secrets of good cuisine during his travels to Florence and taught these to the youths of the area. By the 1800s, cooks from Villa Santa Maria worked for royal families throughout Europe and now are found in restaurants worldwide. 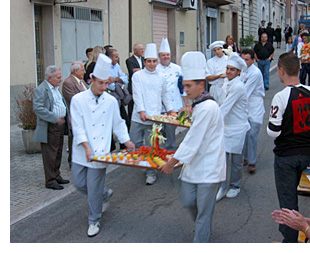 It was late afternoon and throngs of people vied for vantage points along Villa Roma from which to watch the grand finale, the parade of the chefs. We were wedged in between families with children perched on their shoulders and teenagers in tight jeans.

Chefs and their assistants emerged from the culinary institute clutching pallets holding their creations. Promenading slowly down the street, they carried tray and platters filled with appetizers shaped into roses, tulips, plants and trees.

The crowd cheered as a reproduction of St. Peter’s Basilica in white cream, its dome lighted by candles, passed by. Applause followed a white and dark chocolate replica of the Coliseum.

Food was sculpted into medieval castles, ponds with swans and villages with bell towers. Peppers, tomatoes, cheeses and eggs were fashioned into birds, frogs and ducks. An ocean scene replete with carved lobsters, clams, squid, and fish floated by. 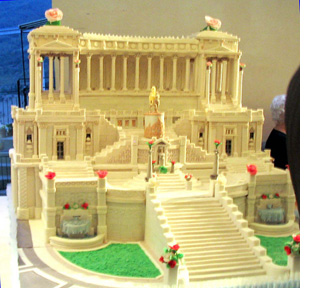 A section of Via Roma had been transformed into a massive outdoor buffet almost a half a mile long. Music filled the air as the chefs made their way to the buffet tables assembled under a white canopy. Gently placing their masterpieces on the tables, the cooks bowed to the applause of the crowd.

Lines of people, waiting to taste the chefs’ creations, formed at the entrance to the buffet. The cooks and their assistants stood behind the tables, knives and forks in hand; ready to serve pieces of their masterpieces to the guests.

As St. Peter’s Basilica was being carved into slices, my friends and I decided to leave. We wanted to remember the culinary works of art in their entire splendor.

On our way out of Villa Santa Maria, Ann, said, “I don’t know how any of those desserts could top the tiramisu we had earlier.” “Let’s come back next October and see,” I said. “Only if we stop and get some tiramisu first,” my friends responded.

About the photos:
1: The village of Villa Santa Maria.
2: Culinary masters on parade.
3: A pastry model of the Vittorio Immanuel monument in Rome.