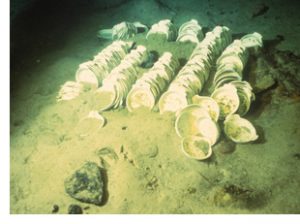 When tense I’m inclined to clench my teeth, and right now I’m grinding my molars big time. The reason? I’m travelling on MIR I, a submersible that is searching through the debris of the sunken wreck of the Titanic.

Should the razor sharp edges of the ship’s rusty skeleton pierce the MIR I’s steel shell, it would be game over. At a depth of 12,500 feet the pressure of water shooting through the puncture could slice through the human body as if it was butter.

Garlands of barnacle-covered cables drift by the window, we skim past a ghostly orange hull, and float above the ribbed railings of the foredeck.

I’m safely seated in the IMAX theatre of the Royal B.C. Museum in Victoria, with no danger of being sent to a watery grave, but the movie Titanica is eerily realistic, and the underwater images loom up close.

The lens probes the debris around the hulk of the Titanic, picking out a set of china plates embossed with the White Star shipping company’s emblem. A fish goggles at the camera as it flits by a large leather trunk. Half buried in the sand is a cluster of corked wine and champagne bottles. The labels have melted away but their contents are intact.

The film intersperses the undersea exploration with old photographs of the Titanic and its passengers.

It also features a vignette of one of the survivors, Eva Hart. Now an old lady, she sits in her English garden and shares her memories as a seven-year-old on board the Titanic along with her parents, their beloved dog and her favourite teddy bear. Told with restraint and gentle irony, her story brings a lump to the throat.

Without wanting to give too much away, the Titanica is a powerful and deeply moving film and is worth seeing before visiting the exhibit galleries. 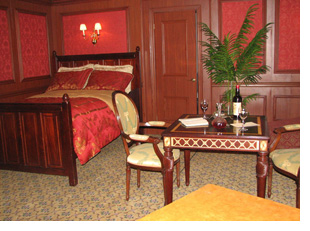 The artifacts recovered from the debris on the ocean floor range from perfume vials (visitors can sniff the scent) to one of the 3 million (possibly defective) rivets that held together the steel plates of the hull.

A massive reproduction of the rust-encrusted hull dominates the entire wall of one room, while several exhibits, in true Royal Museum style, are interactive—replicas of toys that the children on board once played with, Edwardian-era ship-board games and specially designed life-jackets. All of which visitors are invited to touch, don or handle.

The sheer size of the Titanic lived up to its name. It was, at the time, the largest moving object built by man—nearly four city blocks long and eleven stories high.

Each of the first four compartments of the hull was watertight, so that if the ship had hit the iceberg head on, it probably would have survived. In a frantic last minute effort to avoid the towering wall of ice, the first officer ordered the ship to be swung “hard a-starboard.”

The iceberg ripped through the fifth and sixth non-watertight compartments of the hull, and from then on it was only two hours and forty minutes before the doomed Titanic sank to the depths of the Atlantic Ocean with an estimated 1,500 people still on board. As a Titanica commentator remarks, “The ‘unsinkable’ had become the ‘unthinkable’.”

A combination of unusual circumstances and human error contributed to the tragedy. The decision to scrap the usual Sunday morning safety drill, and the lack of sufficient lifeboats might have been dismissed as trivial details. The Titanic was, after all, “practically unsinkable”.

The newly invented Marconi wireless radio system had technical problems and although several warnings about icebergs floating further south than usual went out to the Titanic, only one was delivered to the Captain on the bridge.

It was a still, but very dark night, and visibility was poor. As bitter fate would have it, the binoculars, which should have been available in the crow’s nest lookout, had gone missing.

Finally, even after the alarm was sounded, many passengers didn’t believe that the Titanic was actually going down, so only 19 people boarded the first lifeboat although it could have accommodated 65.

RMS Titanic Inc. is authorized to recover the artifacts of the Titanic on display at the Royal B.C. Museum, while John Zaller, of Premier Exhibitions (the parent company of RMS Titanic) heads up the design team of this unique and ambitious exhibition. 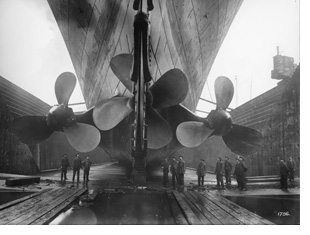 “There’s the excitement of constructing each of the artifact galleries, the ship’s grandeur, and the incredible drama of those final hours,” says Zaller, “but it’s the stories behind these one-of-a-kind irreplaceable objects that truly fire the imagination.”

As I move through the galleries, those stories unfold. This is the human face of the Titanic disaster—in narrative, memoir and photographs.

And as personified by actors dressed in period costumes, all of whom, like ghosts from the doomed ship, share with visitors the thoughts, the hopes and dreams of those long lost passengers and crew.

Through their descriptions and recollections I, too, am awed at the size and beauty of the ship, and am caught up in the excitement of boarding her. I’m also witness to the terror and grief of women and children who, in taking the lifeboats, embraced fathers, brothers, husbands, and lovers in what would be for many of them, a final farewell.

It is those men, women and children of the Titanic that continue to haunt us, their voices echoing down the corridors of time.

The Royal B.C. Museum’s exhibition opens April 14th exactly 95 years after the Titanic plummeted to the ocean floor. It recognizes the fragility of mankind’s overweening ambition, and is a moving tribute to the memory of those who perished as a result of it.