Story and photos by Glen Cowley 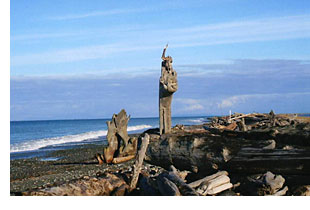 It’s called a rainshadow. A microclimate on the lee side of a mountain chain which receives less rainfall than its neighbours. Welcome to the Olympic Peninsula in Washington State where the seasons run long and mild. Only an annual average of 18 inches of rainfall water the Olympic Peninsula rainshadow despite the closeness of the coastal rainforest. Coupled with the mild weather of the Pacific Northwest this makes for an accessible Eden with favourable climes almost year round. Climes which allow relaxed touring when the passage of fewer footsteps reveals the land and its people in a less tourist-harried visage and affords the added benefits of lower accommodation rates.

The brooding Olympics provide a south and western backdrop while snow shrouded Mount Baker rises singularly to the east. To the north the long gray arm of Juan de Fuca Strait separates it from Vancouver Island. From Port Angeles to Whidbey Island this is a land where it is almost impossible to be without a vista.

Our journey began at Port Angeles where we disgorged from the Blackball Ferry Coho which has been making regular 90 minute runs from Victoria faithfully since 1959.

An unassuming city, where you can climb from sea level to 7,000 feet in a 40 minute drive, it is not given over to tourism. That said there is much to see and do in and around this working seaport town.

The 25 mile Discovery Trail begins here at the harbour and runs past the community pier, with its sea life exhibition, viewing tower and beach access, off along the shore before heading through forest , field and stream until it breaths its last at scenic Sequim Bay.

The well tended trail offers numerous access points for sectional hiking or for the ambitious biker to peddle to hearts content. Plans are to eventually extend it from Lake Ozette on the Pacific Coast to Port Townsend.

Even in the winter, when journeying into the mountains can be a major endeavor, there are easy hikes within minutes of Port Angeles which give you glimpses of majesty or the tranquility of a hidden rainforest waterfall at the end of a moss and fern fringed trail.

We set up for the week near the community of Sequim (pronounced Squim) with its own attractions and ideally situated for exploring the region. Nearby, the long arching tongue of Dungeness Spit, with its national wildlife refuge, affords panoramas of sea, mountain and beach and is well worth the 5.5 mile return hike from the parking lot.

Less than 50 scenic miles away is historic Port Townsend with its living heritage of Victorian parks, architecture and atmosphere. 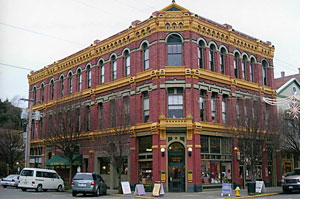 Originally named in 1792 by Capt. George Vancouver for the Marquis de Townsend it did not officially become a community until 1851. It never reached its expected glory when the railroad terminal landed elsewhere but the legacy of its leavings are there for the viewing with a self guided walking/driving tour of its Victorian charm

Spending a full day in this living museum by the sea is most enjoyable. The two lower streets are filled with shops, restaurants and pubs housed in Victorian buildings and tempting you in as much to explore the buildings as for their offerings.

Upper town, which can be reached by a long stairway stretching from an ornate fountain, boasts an array of Victorian homes, many constructed by the community’s well-to-do who did not wish to be tainted by the sweating masses below.

Adjacent to the town is spectacular Fort Worden State Park with its weathering batteries hidden behind a deceptively pastoral forest. Its cliffs overlook a spreading point offering sandy beaches, camping and meandering coastal trails. Trails wind amongst the aging fortifications which began in 1902 and were part of a series of forts which protected access to Puget Sound. Plaques offer detailed information for the inquisitive. 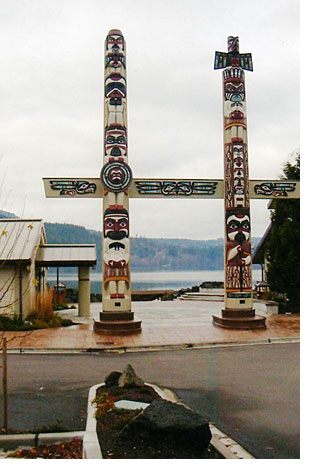 Port Townsend is also the terminal for the 30 minute Whidbey Island ferry run. The Island stretches long and thin through Puget Sound and is linked by bridge to the Mainland in the north. No less than five state parks, all set upon the coasts compliment its community parks and add to the rural laid back atmosphere. Two, Fort Casey and Fort Ebey State Parks house remnants of the forts which formed part of the ring of fire threatening anyone who dared consider an attack through the sound.

The small towns of Coupeville and Langley lounge idyllically along the waterside each with their views of broad bays. Victorian age shops and homes though less imposing than Port Townsend more than compensate with small town charm.

We savoured a fine coffee at the Coupeville Coffeehouse perched over the bay watching waterfowl and listening to the relaxed chatter of locals also enjoying the atmosphere.
In both communities, gift shops, galleries, eateries and the trappings of tourism places hum in the summer and parking is a premium, but if you choose to visit in the off season, they can be enjoyed at leisure.

The easy pace, short distances and wealth of things to see and do makes this corner of Washington State a relaxing destination only made the more pleasant by its long seasons of favourable weather.

About the photos:
1: Dungeness Spit is a gallery for natural art thrust scenically into the heart of the Strait of Jan
de Fuca.
2: The legacy of the Victorian age abounds in old Port Townsend.
3: Stunning totems guard the entrance to the Jamestown centre where you can view and visit
carvers at their work.