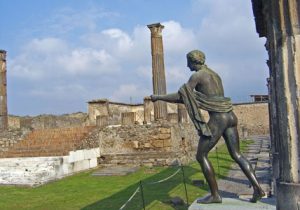 A day trip from Naples, Italy introduces us to one of Europe’s best-preserved archaeological sites. The catastrophic eruption of Mt. Vesuvius in 79 AD entombed Pompeii under six meters of volcanic ash. Entering this sophisticated Roman trading metropolis through ancient Porta Marina.

Massimillio guides us toward the main city square, gesturing widely, “Visualize bakers, merchants and aristocrats from nearby neighborhoods patronizing this marble-paved Forum!” He points out what were law courts, bustling shops and eateries. Of the surrounding lavish temples, a single statue defines one end of the Temple of Apollo; an intact marble staircase delineates the Temple of Jupiter.

Elegant homes mingle with smaller houses along Via de la Fortuna. At House of the Faun, a forest sylph welcomes us into its open courtyard. This grand mansion belonging to wine merchants had forty stylish rooms, including four magnificent dining rooms, one per season. Carved columns line two immense gardens, once filled with statuary and fountains. Nearby, the House of the Vetti boasts original mosaics in green jade, white marble and indigo-blue onyx; vibrant frescoes decorate entertainment rooms. A small house next door features earth-tone frescoes of flowers and whimsical fairies, my favorite.

Raised sidewalks lead us toward one of 34 bakeries feeding Pompeii’s population of 20,000. Imagining tantalizing aromas wafting on air, we marvel that their brick ovens so closely resemble today’s pizza ovens. “During excavations, centuries-old loaves of blackened breads were found inside many,” grins Massimillio. 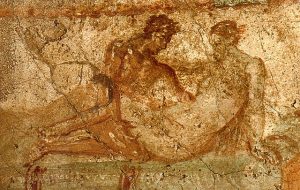 First built in the 2nd century BC, the Grande Theater seated 5000 patrons; a smaller semi-circular neighbor, the Odeon staged mime and music. From topmost hillside seats, we spy gladiator barracks and the colonnaded courtyard beyond. According to Massimillio, gladiator-slave extraordinaire, Spartacus had trained here… but fought in the 12,000-seat amphitheater ten minutes away.

Just as in days of old, Pompeii again attracts thousands of foreigners annually.