The Tuscan sky put on a twilight show, complete with rosy clouds and amber rays, as a pair of nuns crossed the River Arno’s pale stone bridge.

The nuns eclipsed a couple at the bridge’s center who fell into an embrace. Students wearing cool wraparound sunglasses glided by on bikes as women in fashionable wool suits sauntered arm in arm.

I’d arrived in Pisa just in time for the passegiata – the early evening stroll.

Every year millions of travelers dash into Pisa. They snap photos, pick up schlocky souvenirs and dash away. The town is one of the world’s most famous “tourist quickies.” I go more for the La Dolce Vita style than the “quickie” when it comes to Italian travel.

From the moment I landed in Pisa’s small, hassle-free International Airport, my plan to start off my Tuscan vacation by immediately indulging in the simple slow rhythms of Italy began to work.

What followed were heavenly jet-lagged days, as I poked around to find what lies beyond Pisa’s main attraction.

What I discovered was a part of town most tourists miss, even though it’s a short walk from the tower: the heart of the historic center. This area is home to the town’s other 12th century treasure, the University of Pisa, which still flourishes as one of Europe’s most prestigious academic centers. 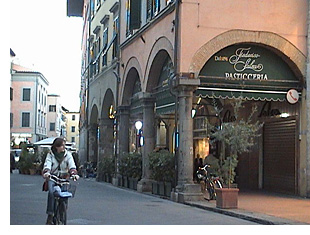 The neighborhood’s look is a sublime blend of arched cobble-stoned streets, Gothic churches and Romanesque palazzos infused with the vibrant energy of young bike-riding students.

This is what the poet Elizabeth Barrett Browning was writing about when she called Pisa “one of those small, delicious towns of silence.”

My accommodations at the Royal Victoria Hotel were the ideal setting for me to take in the city as travelers on the Grand Tour had centuries ago.

Run by the Piegaja family since its opening in 1837, the rambling palazzo features huge marble staircases opening up to grand salons and a rooftop terrace where guests can order up wine and enjoy the view.

My spacious single room (bathroom across the hall) cost only 65 euro, and included a lavish breakfast buffet served in the hotel’s gracious dining
hall.

The creak of fruit and vegetable carts along with merchants’ “buon giornos” woke me in the morning. It was my cue to tie on my scarf, walk around the corner, and blend with the locals at the daily market.

I wandered the harvest display of giant porcini mushrooms, inhaling the sharp smells of aged pecorino cheeses and the sweet aroma of hot pine nuts from a paneficio where Pisa’s specialty pignole cookies were being baked.

It was easy to be lured away from the signs that pointed to Il Torre (The Tower). Camera-toting tourists streamed by me as I headed in the opposite direction to visit a mini-gothic masterpiece: the Santa Maria della Spina church.

It was pouring rain as I approached it – perfect to admire the intricate rooftop as water streamed off its carved pinnacles, angels and saints and then gushed out the mouths of its gargoyles. 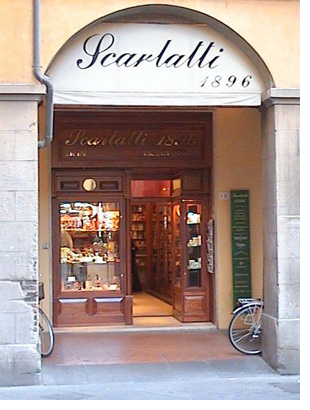 Another diversion around the corner from my hotel was The Borgo Stretto, the historic center’s main walkway where 19^th century storefronts offered enticing displays of shoes and lingerie, gelato and candies.

I slipped into one of the oldest cafes on the stretch, Salza dalla 1898, for a pick-me-up cappuccino and a few homemade chocolates served in their elegant back salon.

The best place for me to rub elbows with the locals (literally) was at the Vineria alla Piazza, steps from the market, where diners are seated at long wooden communal tables.

A chalkboard outside lists the daily fare, which changes according to what’s fresh that day.

Waitresses in denim mini-skirts, t-shirts, black tights and boots expertly pulled off the casual-sexy look while serving fantastic salads and pastas to a lively cross-section of clientele: mammas with their bambini in strollers, boisterous university students, businessmen greeting each other with the traditional double-cheek kiss.

A “join the famiglia” vibe attracted me to the many small trattorie and osterie in the area, all which offered three course dinners with wine for 30 euro.

My favorite was Osteria Cavalieri, where in a cozy alcove lined with wine bottles, I enjoyed taglioni con funghi – pasta with a light mushroom sauce.

Before splurging for dinner at the Hotel Relais dell’Orologio (Pisa’s only five star), I peeked around at the upstairs rooms. The former 14th century tower house has been meticulously renovated, blending Baroque-chic style with the building’s original Renaissance frescoes.

“You are… I don’t know if there is an English translation for this word…,” said the waiter, as I finished off bisteca fiorentina in the hotel’s jewel box of an intimate dining room, “You are solare. It means you are…”

“No… deeper than that. Like… it means you are from the sun… deeply happy…”

I always enjoy the flirtations of Italian waiters, and he didn’t have to go further for me to agree with him. The perfect word for how I was feeling after having spent a couple of days of blending in with authentic Pisan life, could only be expressed in Italian:

Yes, I was solare.

This week Traveling Tales welcomes Susan Van Allen, a journalist based in Los Angeles who writes frequently about Italian travel.

Photos by Susan Van Allen:
1: Souvenir stall near the Tower of Pisa.
2: The Borgo Stretto in Pisa’s Historic Center.
3: The Scarlatti Tobacco shop (from 1898) on the Borgo Stretto.