It’s that time of year again –when chocolate boxes are carved into hearts, roses brim from corner grocers, and cupid comes out of hiding. So, how are you going to celebrate the big day of romance? What love-struck surprise can you conjure up for your favorite valentine? What about heading to the emerald city of Seattle? Here are just a few sweetheart sites that this Pacific Northwest jewel has to offer.

A Treasure Trove for Two

Although Seattle’s downtown core is a mish mash of past and present, it all works together harmoniously. New-age high rises hover above Gold Rush landmarks, trendy boutiques snuggle between flagship department stores and government headquarters brush up to corporate conglomerates. There are countless cozy espresso bars where you can escape the drizzly weather, ethnic-varied restaurants to appease the most discerning palate and so much cultural diversity it’ll make your head spin. This destination that’s embraced by the glistening Puget Sound and backed by snow tipped peaks is so picturesque it’ll tug on any heart strings.

Make Some Music Together at Experience Music Project (EMP) 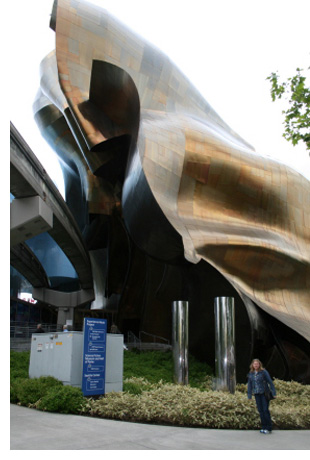 This massive Frank O. Gehry architectural wonder, vaguely shaped in the form of a monumental guitar, is jammed packed with opportunities to get both of your hearts thumping. You’ll be mesmerized by the psychedelic-like acoustics of Sky Church, where musical greats become giant size on the monster video screen, take a step back in time with Jimi Hendrix and his ‘Evolution of Sound,’ and unleash innate musical talents when performing that special song for the one you love. Plunk away on the keyboard, strum on a guitar or serenade each other with a golden oldie.

Charge up Your Imaginations
Instead of sounds, sci-fi may be more your thing. If so, you won’t have to stray too far. Right next door is the Science Fiction Museum, a mind boggling exhibit that’s devoted to thought-provoking ideas. There’s everything from literature and media to future visions for humanity. Their Hall of Fame pays homage to the creative practitioners –writers, artists, publishers and filmmakers and others who have given life to this imaginative world. On your journey you’ll come face to face with monsters, robots, and aliens –just to throw a little Halloween into this Valentine’s Day.

Take Your Love to a Higher Level 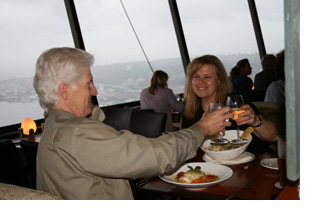 This futuristic-looking Space Needle has been Seattle’s well known icon since the World’s Fair in 1962. From its lofty six hundred foot (204 meters) high observatory your hearts will palpitate when checking out the stunning panorama that includes everything from the city’s bustling downtown hub to the pinnacle of Mt Rainer. Even when the clouds roll in, the ethereal effect will initiate some loving Valentine vibes. You can also share the vista while wining and dining by candlelight. This landmark’s SkyCity rotating restaurant dishes up culinary classics that match the 360 degree rotating view.

Or Go underground!
For a step back in time, stroll the cobblestone streets of Pioneer Square, where an iron pergola, Tlingit totem pole, and Romanesque brick buildings are remnants of Seattle’s past. Check out art galleries, cafés, antique shops –the eclectic area definitely encourages lots of hand-holding. And don’t forget to check out what also lies beneath the streets. Bill Speidel’s Underground Tour is a cheesy but entertaining guided tour of the hidden subterranean passages that were once the main roadways of downtown Seattle. 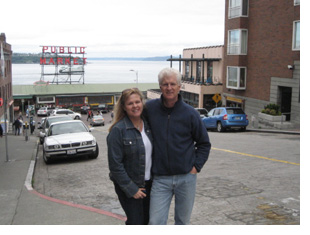 Chocolates, flowers, jewelry, oh my! You’ll find every valentine favorite at this queen bee of farmer’s markets. But watch out for those flying fish! This venue has been a Seattle institution since 1907 and beneath open air tents, merchants, craftsman and farmers line up year round. Aside from the original Starbucks, you won’t find any chain stores here –and all is sold on a first come basis, so for the freshest and finest, get their early. You won’t be disappointed!

Go For Some Paired Pampering
Vida is one Seattle’s newer spas where you can bliss out together. All seventeen treatment rooms offer unrivalled delights that will satisfy any spa aficionado. From hot stones and body wraps to massages and facials their therapies are designed to relax, restore and regenerate. While lying side by side in one of these zen-like havens, you’ll most definitely zone out. 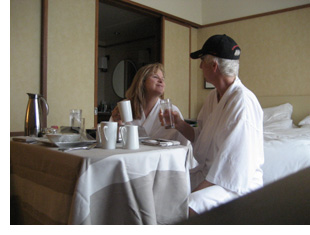 This elite award winner occupies a prime location near the city’s core. Instead of being squeezed next to downtown high rises that brim from Seattle’s bustling vortex, you’ll be idyllically distanced from the percolating crowds. It’s just four blocks from the Pike and Pine Street shopping, six blocks from the Convention Center and the Space Needle, and minutes via streetcar from Lake Union’s enticing restaurants.

You may want to surprise your sweetie by booking the ‘Romance Package.’ A fresh bouquet, decadent chocolates and a bottle of bubbly will accompany your contemporary suite. Or better yet, go for the Sleepless in Seattle. With brunch in bed, a pair of PJs to share and free romantic in-room movies, you probably won’t get much shut eye!

Since 1996, Jane Cassie’s articles have appeared in over 3,000 newspapers and magazines. As well as co-owner of Travel Writers’ Tales www.travelwriterstales.com, she’s a member of SATW, TMAC and BCATW. www.janecassie.com

About The Photos:
1. EMP shaped like a monumental guitar
2. Dining in style at the space Needle’s SkyCity
3. To market, to market
4. Enjoying Pan Pacific’s room service