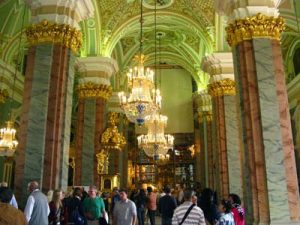 Day Trips from St. Petersburg to Peter and Paul Fortress are a pleasant one-hour-str0ll from the city’s famous landmark, Palace Square.  We make our way down charming streets and cross a bridge to the renowned fortress on Zayachy (Hare) Island in the Neva River.

This first walled settlement was the beginning of St. Petersburg, founded by Peter the Great in 1703 at the height of the Great Northern War to protect Russia against the Swedish Empire. A complex of museums is now housed in the old structures depicting centuries of historical significance.

Peter and Paul Cathedral’s prominence is overpowering; its bell tower rises to 122.5metres, a gilded angel tops the cupola. My husband Rick and I swing open heavy wooden doors to a resplendence of marble and gold. Rows of sarcophagi surround the edges of the gleaming marble floor – with the exception of two,  all of Russia’s Emperors and Empresses are buried here.  It was a heady feeling to gaze upon the final resting place of “The Greats – Peter, Alexander and Catherine.”

I move to the canopied section at the back of the church where on July 17, 1998 the remains of Tsar Nicholas II, the last Romanov Emperor, his wife Tsarina Alexandra Fyodorovna, and daughters Olga, Tatiana and Anastasia are laid to rest, along with the servants who were murdered with them. This macabre execution by the Bolsheviks took place in the city of Yekaterinburg in July 1918, to ensure ties would be broken to those citizens who after the Revolution might remain loyal to the Romanov Dynasty.  The remains of the other two Romanov children, Maria and son Alexei were discovered in 2000, approximately 70metres from where the other members were found in a mass grave 16 years earlier. Authenticity has now been proven by DNA tests. Burial is awaiting approval by the Russian Orthodox Church.

Checking out the selection of other Fortress Museums, we decide on the Commandant’s House to glean the city’s history prior to 1917. The rooms are filled with old office-type furniture that the top-dogs who once ran the place may have used.

Our last museum choice is the Prison of the Trubetskoy Bastion. Built in 1720 and rebuilt in the 1870s it was the holding facility for a long line of political prisoners and dissidents. Prison cells with one small high window contain a small table and a metal cot, some with bare springs, others with thin mattress or rough grey wool blanket. Outside each cell are write-ups with photos of some of the prominent figures once imprisoned here – two names are immediately familiar – Revolutionary Leon Trotsky and Novelist Fyodor Dostoevsky.

We hurriedly approach Naryshkin Bastion and climb the tower platform for a good view of the cannon firing at noon. I no sooner get settled along the rail with about 200 other spectators than church bell chimes. I expect a loud boom – but not the unraveling ear-shattering blast! I yelp and jump a foot almost losing my video camera over the railing – my resulting footage is only the deafening explosion and trickle of aftermath smoke.

After visits to a functioning Mint and The City History Museum within the fortress grounds, it’s time to spread out our picnic fare on the lawn that runs along the river outside the walls. We sit among like-minded locals soaking up the late afternoon sun and leave the island with an enlightened perspective of the historical roots of St. Petersburg.

About the author
Irene Butler is an award winning travel writer and author of “Trekking the Globe with Mostly Gentle Footsteps” now on Kindle. Her articles have appeared in national and international publications. She and her photographer husband Rick explore the world for six months of every year. www.globaltrekkers.ca