This sleepy seaside town of 600 residents overlooks the silvery Ionian Sea; her crystal- blue waters sorely tempt us, begging my hubby and I to dilly-dally along white sugar-sand beaches.

Tiny shops brimming with robust red wines, pungent cheeses, gourmet salad spices and golden olive oils lure others…but, the home of the first Olympic games waits, just thirty minutes out of town. Nowadays, travelers like us flock there by the thousands…following in the steps of ancient Greeks who’d journeyed from far and wide every four years.

Setting the scene for our personal pilgrimage, we browse in the Archaeological Museum, a marvelous treasury of archaic sculptures and friezes uncovered at the site, including the renowned barefoot goddess Nike: ‘Winged Victory.’ Although she is without arms or wings, we appreciate her immense grace and inspiration for athletes.

Then, along with fellow Olympic wannabees, we gather around Astra who guides us through the classical site, explaining, “The Alpheus River still runs through Olympia, which lies in this lovely valley in the western Peloponnesus.” 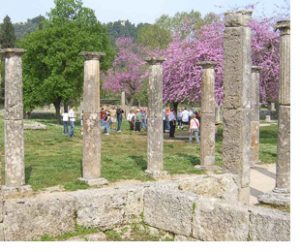 Shaded today by spreading dusty-green olive trees and Judas trees bursting with delicate pink blossoms, this momentous spot is lush and luxuriant, unlike other archeological sites we’ve visited. Though excavated during the mid-19th-century, this beautiful sanctuary has never been ransacked.

She continues, “In antiquity, Olympia wasn’t a town, but a sacred Sanctuary of Zeus…which doubled as the location for early athletic competitions.

As a deified shrine of elaborate temples, priests’ dwellings and public buildings, Olympia enclosed many Greek art treasures: monuments, altars, theaters, statues and offerings of brass and marble…including a row of 12 treasure houses.

And dedicated to the powerful Macedonian dynasty, the magnificent circular Philippeum was begun by Philip II, King of Macedonia but completed by Alexander the Great. The Leonidaion guesthouse provided lavish accommodations for important foreign guests and officials during their visits.”

Olympia spreads along the foot of the Hill of Kronos. Weaving in some mythology, the guide explains how Zeus fought and killed Kronos the God of Time, entombing him in this little hill. “It’s just possible that the games first began with people paying their respects at the tomb of Kronos,” she twinkled. I wonder… 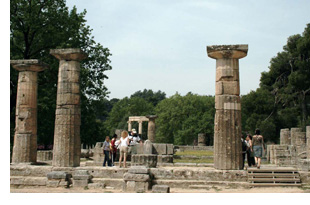 Dedicated to Zeus and open to all male Greeks, the first games were officially held in 776 BC. Women were not allowed to enter this sanctuary either as participants or spectators until much later. Those trying to sneak in were thrown from a nearby rock.

During this five-day contest, enemy city-states were bound by a hallowed truce; peace reigned. Instead of war, athletes battled in sport: wrestling; chariot and horse racing; pentathlon, (wrestling, discus, javelin, long jump and running)…and pancratium, a fierce form of boxing.

At that time, splendid crowns of wild olive branches were enough to immortalize victors, families and cities for decades…unlike today, where winners expect lucrative endorsements…

Throughout the celebrations, writers, poets and historians recited their works to large audiences while leaders resolved differences through discussion…and merchants profited greatly. “Maybe our modern Games are similar after all,” I chuckle…

The massive brick workshop where Athenian sculptor Pheidias built his masterpiece still stands, identified by discovery of tools and terra-cotta molds. His Temple of Zeus had been most celebrated as one of the Seven Wonders of the Ancient World: his gargantuan ivory-and-gold statue of Zeus, a scepter in his left hand, winged Nike in his right, sat upon a carved ebony-and-ivory throne atop a pedestal 20 meters high.

Dedicated to Hera, wife of Zeus, the Heraeum was positioned next door. The large, richly ornamented building originally made of wood contained an inner cella that enclosed the huge sculpted figures of Hera and Zeus, the deities.

The sought-after garlands prepared for victors had awaited presentation on a marble table in this temple; a fire burned throughout these celebrations, reminiscent of the fire stolen from the gods by Prometheus.

That iconic flame has been a part of the modern games since 1928. Dressed as priestesses, eleven women in flowing white gowns kindle the Olympic torch here at Hera’s temple, the sun’s rays concentrated by parabolic mirrors.

And since 2004, the sacred lit torch has been relayed throughout the world, burning in the host city until the closing ceremonies officially concludes events…

Parading through the tunnel-like entrance to the Olympic stadium sparked great excitement as we spill eagerly onto the field dating back to the 5th-century BC. Here, the start and finish lines of the original sprint track survive. On the stadium’s southern slope there had been a stone platform for the judges and opposite, an altar to Demeter. 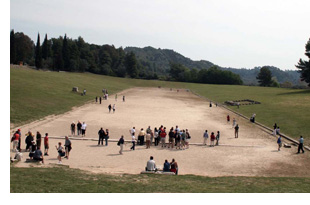 Ragged lines of proper athletic types, as well as groups of puffing others like my hubby, time themselves racing across the 120-meter distance. The rest of us clap and hoot enthusiastically.

Then, this stadium had seated up to 45,000 wildly cheering spectators rooting for god-like participants at the peak of physical prowess, their bodies sleek with oils. Fortunately for us, or maybe unfortunately, nobody this day mimics the nude athleticism of ancient Olympia …

As we leave this revealing archeological site, Astra observes, “Eventually, the Romans moved into Olympia…and in the first century AD Nero, the most infamous Emperor of them all, had a luxurious villa built here…”

Nowadays, expense and controversy seriously obscure the historic spirit of the Olympic games. But after daytripping to where it all began, we see that much existing in modern games is rooted in the days of antiquity, centuries ago at Olympia.

About the photos:
1: In the Spring, pink blossomed Judas trees shade much of ancient Olympia.
2: The Temple of Zeus once housed one the Seven Wonders of the Ancient World.
3: Olympia’s stadium running track once held 45,000 spectators.

If You Go:
Carnival Cruise Ship Freedom provides both admirable accommodations and comfortable transport to this isolated southern point of the Peloponnesian Peninsula. To review its complete itinerary, contact: www.carnival.com