Surrounded by hell-bent footsteps and a blur of grey scowls, we ducked onto a suddenly peaceful train, to escape the insanity of rush hour London for an altogether more green and more pleasant part of the land.

I heard a keen rustle of waterproofs as an American couple behind me fished out their Cambridge guidebooks, feeling pleased to be taking my young Polish friend a little further, for a walk around my quietly confident, tourist-free home town, which locals say has “a church for every Sunday and a pub for every day of the year.”

Smart, stately Norwich train station was the perfect starting point for a peaceful afternoon. Turning right along the river Wensum, away from the city’s gentle hustle and bustle, we wandered along a sleepy riverside path, under willow trees sweeping into the slow flowing water.

There was a polite cheer in the distance before we spotted navy and red striped boys from Norwich School playing rugby on the wide green, under strict supervision from the tall, elegant Church of England Cathedral.

We sloped off in their direction down secret seeming Cathedral Close, where waxy trails of ivy creep over a charming cluster of mismatched traditional architecture in crumbly red brick and blue-grey Norfolk flint.

The graceful, sandy coloured spire which towers almost one hundred metres above as you approach the cathedral, gives you a sense of the size and power of the city during the first half of the previous century. Norwich was the second largest and wealthiest settlement in England after London when building began in 1096, at the time of the Norman Conquest.

Before stepping through the dark, heavy west door, we gave a nod to the couple presiding over the building’s façade. The first woman ever to write a book in English; medieval mystic Lady Julian of Norwich, looks serenely out over the close to welcome visitors.

Her writing was a precursor of the city’s thriving literary culture, centred today around the University of East Anglia, which has trained many prominent novelists, including Booker Prize winners Ian McEwan, Anne Enright and Kazuo Ishiguro.

To her left, deep in thought, stands Saint Benedict, the monk who founded the Cathedral priory a thousand years ago.

These modern sculptures are based on people who still live in the city; strangely enough, Saint Benedict was found playing jazz guitar in a restaurant on nearby Saint Benedict’s street. He had just the right Romanesque features to represent the saint, and even agreed to shave his head for the sculptor.

I squinted at my watch in the bright sunlight, as we stepped out of the cool, damp calm of the cloisters, where we had been trying to decipher the biblical messages behind the dozens of brightly coloured carvings of ghoulish green faces and flame red phoenixes on its low ceiling. It was nearly lunchtime, so rubbing our stiff necks, we crunched across the gravel to the nearest pub.

The bricks and beams of the ancient Adam and Eve on Bishopsgate sag knowingly under the weight of a stormy history.

The first customers of the city’s oldest inn, were builders working on the cathedral in the 1200s, who would come here after a days hard graft to be paid in bread and ale.

We washed down hearty plates of bangers and mash in onion gravy with dark pints of Mauldon’s Moletrap bitter, whilst trying to wheedle the truth out of the landlady about the uncanny number of murders centred around the place over the centuries. 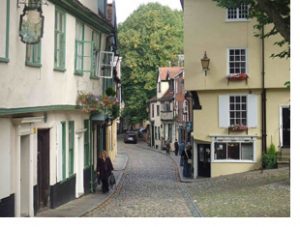 We tripped over what seemed like almost every cobble when we finally headed off down Elm Hill, leaning on each other like the lopsided timber-framed houses down this narrow Tudor lane full of eccentric antiquarian booksellers and free art galleries.

Not much needed alteration to create the time warp necessary for the set of fantasy blockbuster Stardust, starring Robert de Niro and Sienna Miller, which was filmed here in 2007.

The cobbled streets got trendier as we headed up towards Pottergate, rifling through a few independent record shops and vintage clothes stores on the way.

I cringed at the smell of patchouli incense as we passed Head in the Clouds, where the nicely brought up children of Norwich are initiated into mild adolescent rebellion with the help of hair dyes, nose rings and rolling papers.

If only their herbal highs had been strong enough to erase my own memories of the outfits I used to put together there in the not so distant past.

Emerging from Upper Goat Lane, with the cheerful, stripy awnings of Norwich market below us, we crossed over towards the Forum; the city’s impressive glass covered Millennium library and media centre.

Sipping hot milky tea by the amphitheatre style steps, with children laughing and skateboards clacking in the background, I remembered my panic at the smoke and flames rising from the old library, which I was heading for to do some last minute revision for exams fourteen years previously.

On the way back to the station, we couldn’t miss exploring Norwich Castle, which has towered over the city since it was built buy the Normans as a royal palace 900 years ago. 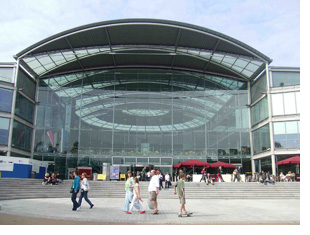 Highlights for us were a tour of the dank, cramped maze of dungeons where prisoners were kept festering in the dark, views over Norwich from the ramparts, and the outstanding collection of landscapes by artists from the Norwich School art movement of the early 1800s.

Tired and happy, we flopped into our seats on the train back to the frenzy of London, trying to work out how many more trips we’d have to make to drop into all the other quintessentially English pubs and churches this charming market town keeps tucked away from the crowds.

If you go:
Trains run direct to Norwich every half hour from London Liverpool Street ( two cheap single tickets can be bought in advance from www.nationalexpresseastcoast.com ) or via Cambridge from Kings Cross. The journey takes two hours.
www.cathedral.org.uk provides a very informative guide to Norwich Cathedral

Go to www.museums.norfolk.gov.uk for Castle opening times and ticket prices