Nimes. Chances are you know the name. Like as not you have worn it.

This ancient city of southern France shares the tough durable quality of denim, the famed cotton work pants rooted in the California Gold Rush of the 1840’s. It is also an ideal focal point for a memorable and reasonably priced touring experience.

Any doubt Nimes is unique flees the moment you set eyes upon the imposing grandeur of its 20,000 seat Roman Coliseum.

For 2000 years it has remained in continual use and is the centre piece of seasonal ferias; festivals which transform the city of 130,000 into a little bit of Spain replete with street bands, parades and bullfighting.

Already pedestrian friendly, the old city balloons onto surrounding streets in a riot of tented venues for food, drink and merry-making. Music strains throb deep into the night from bodegas gorged with celebrants dancing and singing. 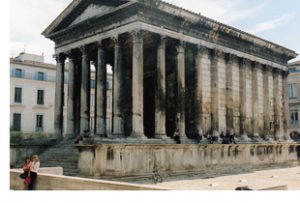 Nimes’ Imperial Roman grandeur is commanding. The Maison Carree (Square House), one of the best preserved Roman temples in the world, still dominates the old forum.

A short walk away the resplendent 17th century Jardins de la Fountaine incorporate the ruins of the Temple of Diana and the grounds of the old Roman baths. Here where Celts once worshiped their water divinity Nimois elegant terraced grounds, ballustraded walkways and statues sprawl and locals play at Petanque.

High above, Tour Magne, the imposing remnant of the original Roman watchtower, affords an expansive view of Nimes, including the not-too-distant Mediterranean. 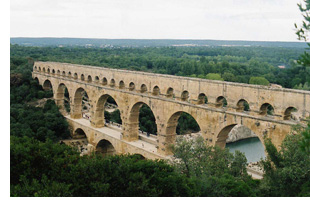 Then there is the castellum, the central water distribution point of a remarkable waterworks network intricately associated with a wonder of the ancient world. That wonder is a 49 kilometre aqueduct which brought water from distant Uzes.

At Pont du Gard, a UNESCO World Heritage site, the towering aqueduct crosses the Gardon River in a marvel of engineering and endurance.

Pont du Gard is but one of dozens of destinations easily within a day’s sojourn from Nimes. Traveling by rail, bus or car through villages and towns, past expansive vineyards and olive groves, whose ageless trees twist in unseen breezes, opens up the wealth of what is to be seen and done so close to Nimes.

Stretched along the Rhone Arles boasts its own well preserved and equally well used Roman Coliseum which compliments its actively used amphitheater and historic medieval walks. A self guided Van Gogh walking tour, available at the tourist information centre, takes you to spots the enigmatic genius set up his easel and created masterpieces.

The vastness of Place de Comedie in Montpellier, surrounded by cafés, wrought iron balconied apartments and throngs of visitors, hums to the strains of accordion playing buskers and leads to the gardened stretches of Esplanade du Gaulle with its fountains and open air market.

Avignon, the famed Papal city, rises majestically over the Rhone and the remnants of Pont de St. Benizet, more popularly known as the famous Pont d’Avignon of song.

For one hundred years the Popes ruled from this walled city and built their edifices to last. You need to allow for a very long day here if you wish to explore the Palais du Pape, walk the Pont d’Avignon and any of the many other historic sites open to the public.

Sete, The Venice of France, its swath of canals brimming with colourful watercraft and lined with cafes, sparkles under a Mediterranean Sun. It is a worthwhile clamber to the viewpoint (183 metres)on Mont St.Clair for a panoramic vista of sea and city.

The Saturday market in Uzes crowds the arcaded squares and spills on to the streets of this medieval town under the dominating spire of the Duke’s castle. 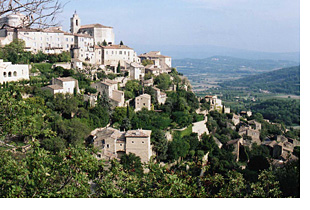 The village and ruined fortifications of Les Beau de Provence, sculpted from the hills looming high above vineyards and olive groves, attest to a dramatic history.

Walking its steep and narrow cobbled streets with shops and homes carved out of the rock or clinging to the slopes transports you back to a time when the lords of Mannville, who claimed descent from one of the three Magi (Balthazar), ruled the land.

A hanging garden of homes and terraces suspended from the sky cling to the cliff sides at Gorde. The wide folds of the village sweep away dress-like beneath its hilltop castle.

Graced with miles of sandy beach the seaside town of Saintes Marie de la Mer gathers around its fortified medieval church famed for the Black Madonna and the annual ritual of her journey to the sea.

With haunting origins harkening to the very birth of Christianity and reverenced by both the Roma and the Gardian she rests in the vaulted crypt of the church, warmed by hundreds of votive candles.

The vast wetlands of The Camargue with its Flamingoes and Egrets, famed Guardians on their white steeds tending to herds of the ebony bulls whose days of glory and death await them in the bull rings. Endless horizons affords mini holidays at horse riding ranches where the visitor can explore the beaches on horseback or bike the trails of its National Park.

Founded in 1240 by King Louis IX, later Saint Louis, and from where he departed on the great crusades to the Middle East, the walled medieval city of Aigues Mortes rises sharply from the Mediterranean shore.

Here the Tower of Constance was long a prison for protestant Huguenots one of whom, Marie Durand, was to pine for 38 years behind its walls.

Enough? Two weeks gave us but a sample of this vintage. Nimes is easily a focal point rich in its own attractions and central to a host of destinations to keep you busy for a month.

We all know denim achieved fame for its toughness and resiliency but its joy too is in its comfort. So too does its namesake let you laze back, see, learn and enjoy.

Photos by Glen Cowley:
1: The Maisson Carrree, one of the best preserved Roman temples in the world.
2: Overview of the Pont du Gard aqueduct.
3: The medieval town of Gorde.