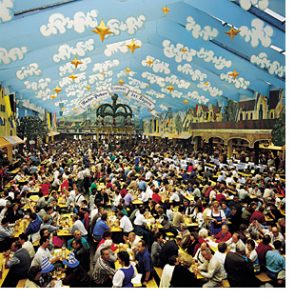 Above all, they drink beer – one-litre mugs at a time, known in Germany as maß (pronounced “mass”).

Upon entering the Oktoberfest grounds, you are first met by fair rides. Spinning, whirling, gravity-defying, vomit-inducing rides. Next, comes the music. Faint at first, and then building into a cacophony of accordions, horned instruments and boisterous cheering.

These were the drinking songs my best friend and I would never quite understand, but would grow to love during our 48-hour stint at the festival.

What the heck, we thought, we’ll just take a look inside the first drinking tent we see. And so, we shrugged and gingerly stepped into Hofbräuhaus, destined not to emerge until midnight.

The “tent” was not really a tent at all, but a semi-permanent structure that houses 9,000 beer-drinking merry-makers.

Some, we could tell, had been there since the 9:am bell, blankly staring out from under their pointy grey souvenir hats; swaying gently under their own weight with tilted, half-full steins in their hands.

“Ein Prozit. Ein Prozit. Der Geme … something …something … keit,” singers trailed off as they sung along to the most popular drinking song, and raised their overflowing steins in the air. 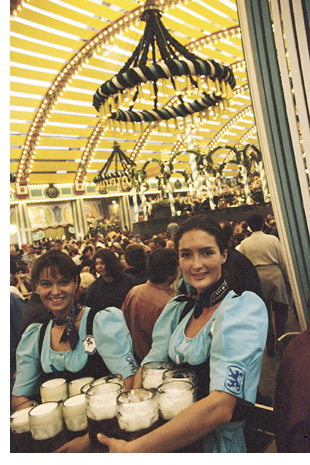 A bar maid wearing a traditional bust-popping dirndl – walked by our section. Why not grab, “Ein maß bitte?”

When she returned, she was bear-hugging 10 steins, each weighing at least two kilos – though legend has it, the festival record is 18. She slammed them down on the table with vigour and started collecting the money before moving on to the next table.

Though the festival runs for just over two weeks, rumour has it that good waitresses can clear thousands of Euro. Many of them work in Munich’s beer halls the rest of the year or have had their jobs handed down to them through generations.

A couple of steins later, we were caught up in the circus atmosphere, singing along with the songs and cheersing our neighbours: “Eins, zwei, g’suffa!” (One, two, cheers!)

Later that night, amidst the chaos, we met a middle-aged Bavarian man, dressed in traditional lederhosen – which literally means “leather trousers”.

As someone who has been surviving the Oktoberfest festival for most of his life, he had a piece of advice for us:

“These tourists, they don’t know the trick to drinking,” he said knowingly as he dug into his hearty chicken and potato dinner and took a long swig of the Bavarian nectar.

“You drink a few steins, then you eat.” He proceeded to break a pretzel into pieces and hand them out to everyone at our table.

“Now you can drink some more,” he said with a grin, gesturing to the beer. And drink we did. And drink. And drink.

Bavarians have been celebrating Oktoberfest since 1810. The festival, which they affectionately call “Die Wiesn,” began as a celebration in honour of the Bavarian Crown Prince Ludwig and his new bride, Princess Therese von Sachsen-Hildburghausen – tongue twister, I know.

In the beginning, the festival actually did start in October, and lasted for five days, but because the Bavarians were having so much fun, they decided to prolong it, and push the start date forward into mid-September, when the weather is better. 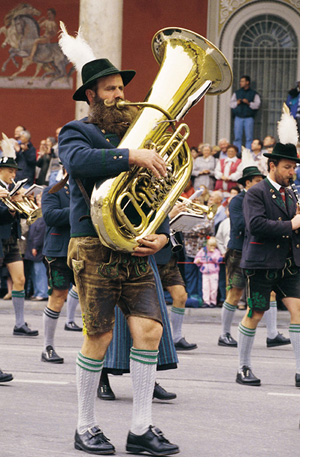 Thousands of locals still attend the event. Many tend to stick to the more traditional tents, while the younger Bavarians and backpacker crowd gravitate to tents like Hoffbrau, which has a reputation for being one of the wildest of the bunch.

The locals we met were very friendly and hospitable, including Peter, who wore a cut-off jean vest, plastered with iron-on patches, depicting derogatory slogans against the enemy soccer team. His mom had been sewing them on for him since he was 10.

“Forgive me if I’m smelling,” Peter said bashfully. “But, it is not my belief to washing this jacket.”

Peter taught us that the lyrics to the most popular drinking song were: “Ein Prozit. Ein Prozit der Gemütlichkeit.”

Despite Peter’s efforts, we promptly forgot the words as the rest of the night blurred into a haze of colour and sounds: clinking glass, green vests, boisterous laughter, brass horns, wide smiles and copper-coloured lager.

Last call came quickly, and we were soon outside the beer tent again. Our eyes adjusted to the blinking fair rides. The aroma of roasted nuts, candyfloss, and musty beer filled our nostrils as we staggered our way back to the hostel.

Our first night had passed at Oktoberfest and our stein-carrying hands were grooved with temporary bruises between the thumb and forefinger – a common festival symptom, so I’m told.

We left Munich a few days later with the phantom lyrics of Ein Prozit ringing in our ears and souvenir steins destined to weigh down our backpacks for the remainder of the trip.

To this day, I don’t know how I drank multiple litres of beer without suffering from the most brutal hangover known to man.

3: This horn player participates in the Costume and Riflemen’s Parade, one of
the many spectacles of Oktoberfest. Photo by Pierre Rouchaléon, courtesy of
FV Amuc,(Munich Tourist Office)

If You Go:
* Oktoberfest 2008 runs September 20 to October 5.
* Book your hotel or hostel room well in advance (hostelworld.com is a great
site).
* If you’d like to let someone else do the planning, there are a variety of tour
operators that offer Oktoberfest tours, including Busabout (www.busabout.com).
* Leave all valuables (passport, wallet, mobile phone) back at the hotel.
* Buy a disposable camera.
* Wear your grubbiest clothes.
* Make sure you eat and drink water in between steins.
* Bring a map and address of where you’re staying – in case you have one stein too many.