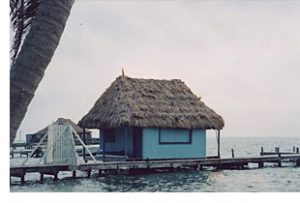 I stood on the balcony of our rented condo in San Pedro and watched the lone fisherman stroll to a small craft at the end of the tired-looking dock. He raised the sails, caught enough breeze to move through the still waters and sailed into a stream of an amber gold sunrise.

Seeing such a peaceful way to commute to work made me want to jump into the Caribbean and swim out to apprentice. I watched until he disappeared from view. That is how I started each day in Belize.

The first evening there, I took off my watch and set it on top of the refrigerator. It was the last time I wore a watch. On Ambergris Caye, where San Pedro is located, time is experienced in memories, not minutes.

Clinton, a local guide, that my husband and I hired, had a runabout with a motor that required daily maintenance so he came by on “Clinton-time” and took us with him on timeless adventures.

The longest barrier reef in the Western Hemisphere is off the coast of Belize, making it a popular dive and snorkel destination. So on days after Clinton patched up the boat’s motor, we snorkeled along the reef with schools of tropical fish.

He had fished, swam, and snorkeled in the waters off Ambergris Caye as long as he had memory. He knew the coral and the fishes and moved about the sea as if he rightfully belonged. We followed as his eager students.

On our first outing, the three of us went out to Shark Ray Alley, a part of a marine reserve about 4 miles south of San Pedro. For years fisherman used to clean their catch in the area and the nurse sharks and stingrays got used to finding an easy meal on the remains.

They still gather when a boat anchors and now seem to wait for guides to throw out chum as the animal’s reward for playing nice. The stingrays have wing-like fins that span up to 5 feet. I asked Clinton about the “sting” part. The only caution given was to neither step upon nor grab the ray’s tail. Instruction obeyed.

The creatures had gentle eyes and actually appeared to smile. After watching my husband and our guide swimming with their amiable playmates, I slid into the brilliant, warm, clear water. Gliding amongst several large rays, I felt like a sea goddess moving with them in a whimsical dream.

We found good fishing spots and followed the catch and release policy except for the fish we saved for dinner which we took ashore to an out-of-the-way beach where we gathered coconut shells to use as the fuel for cooking our fresh caught snapper. Of course it was delicious. The Caribbean and a beach we had mostly to ourselves are ingredients to make any meal magnificent.

The shore around San Pedro is an extraordinary place for water sports. All beaches are public. We were enchanted with this sea and found ourselves on it every day. Since the reef is only a half mile offshore, my husband and I got kayaks, which are available at a couple of docks along the beachfront, and paddled out to snorkel.

Other times, we rented catamarans from an outfitter and sailed north towards Mexico where there are remote resorts or along the southern coastline where the resorts are more plentiful. The reef protects the sea from large waves and makes for smooth sailing.

San Pedro is tourist-friendly and appears be able to handle it without surrendering it’s character.

Grass thatched roofs and short wooden structures mostly line the sandy roads. The town consists of only three streets. While there are laid back places that cater to divers as well as full luxury resorts, none are large mega hotels. The only access to town from the northern part is by boat or by crossing the San Pedro River, a channel that divides the island. 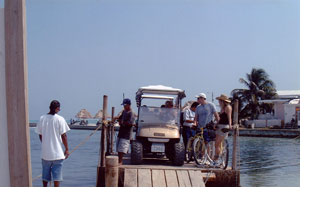 A pull-ferry carries passengers on the one-minute ride. Only pedestrians, bicycles and golf-carts, the main motorized means of getting around inland, can cross. The road on the northern side is a narrow unpaved path barely wide enough for two golf carts to squeeze by each other.

Even when we ventured inland to see the Mayan ruins at Lamanai it involved water transportation: first by a bumpy ocean boat to mainland Belize, then by van over roads that felt like we were surfing a tsunami, then finally by a riverboat ride though the jungle via the New River.

We watched for crocodiles as the captain told us, but spotted none. It was worth the wild ride from civilization to wander the excavated area of this ancient culture where archeologists are reclaiming temples and tombs and ball courts from the dense jungle vegetation. 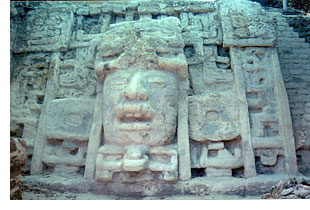 Viewing the size of the High Temple and the detail of the exposed mask on the Mask Temple helps one to understand that this was an important ceremonial site for the Mayans.

The aptly named black howler monkeys live in the jungle treetops and can be seen as well as heard. Lamanai had one of the longest Mayan occupation spans, from 1500 B.C. to 19th Century A.D.

I think about this laid-back place with its wonderful water playground and every once in awhile, I regret not swimming out to the lone fisherman.

Photos by Mary Pat Musick
1: Thatched roof on the boathouse.
2: The pull ferry across the San Pedro River.
3: Mask on a temple in Lamanai.