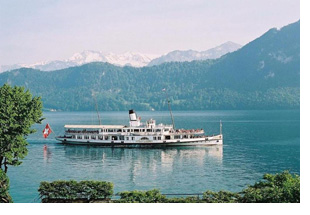 Intrigued by the exploits of Mark Twain in his novel A Tramp Abroad, I decided to follow the Swiss section of his footsteps and travel from Lucerne in Central Switzerland south to the alpine spa town of Leukerbad.

My first quest was to find the Lion Monument which Twain described as ‘the most mournful and moving piece of stone in the world’. From the lakeside town of Lucerne, my husband and I walked across the famous covered wooden footbridge which was thronged with tourists photographing the overhead paintings. With map in hand, our self-guided walk took us through the medieval Old Town with its narrow alleys and 15th century buildings, then uphill to the Lion Memorial. Hewn from sandstone to commemorate the Swiss soldiers who died in the French Revolution, the dying lion with a spear embedded in its left flank is indeed a poignant sight.

The next morning after feeding the swans by the quayside, we boarded one of the old-fashioned paddle steamers for a half-day trip to Fluelen at the south eastern arm of Lake Lucerne (Vierwaldstattersee).

Sitting on the top deck, we had a perfect view of the breathtaking mountain scenery. As our boat zigzagged in and out of the picturesque lakeside villages I had to agree with my 19th century protagonist that ‘a trip on that lake is almost the perfection of pleasuring. The mountains were a never ceasing marvel.’

On our return boat journey, we disembarked at the tranquil lakeside village of Weggis which is dwarfed by Mt. Rigi, an impressive escarpment which stands at 1800m. 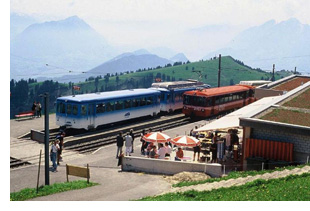 An aerial cable car whisked us above Weggis and over pristine alpine meadows dotted with Simmental cows. Mark Twain took three exhausting days to make the same uphill trip along a leafy mule-path.

En route, he was pestered by Alpenhorn players looking for tips and when he finally reached his destination at the Rigi Kulm Hotel, he overslept due to the ‘opiate of Alpine pedestrianism’ and missed the sunrise. The next morning, heavy cloud further thwarted his plans.

Over a century later, our experience was less wearisome. The refreshing mountain air was perfect for hiking and we had crystal clear views over the Alps and Lake Lucerne with its steamers looking like toy boats below.

Backtracking by boat to Lucerne, we took the train via the scenic Brunig Pass to Interlaken. As we sped alongside the turquoise waters of Lake Brienz, I thought of Twain making the same journey in a four-horse carriage with a driver who traveled through villages on a furious run with ‘a frenzy of ceaseless whip crackings’.

Our destination was the imposing Victoria-Jungfrau Grand Hotel which dates back to 1865. From our balcony, like Twain, we had unimpeded views of the majestic Jungfrau Massif which is home to the highest railway station in Europe.

From the Bernese Oberland, Mark Twain hiked over the Gemmi Pass to Leukerbad. Not being quite as fleet-of-foot, however, we cheated and instead took a southern route from the town of Leuk.

The precipitous journey by Post Bus was a little less scary when a snowstorm blotted out the plunging views down into the Rhone Valley below. At an altitude of 1,400m, Leukerbad is one of the highest and largest mountain spa resorts in Europe. 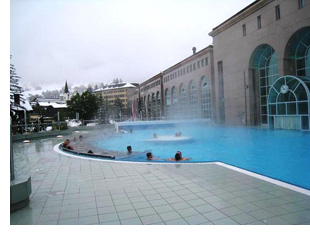 With the snow falling as gently as feathers, we ventured out to luxuriate in the warm waters of the elegant Lindner Alpentherme spa. Surrounded by this walled mountainous amphitheater, Twain’s graphic description of the pools is still true today: ‘Those baths remove fat, and also skin-diseases. The patients remain in the great tanks hours at a time.’

On our last morning the sun shone from brilliant blue skies and the barren face of the Daubenhorn looked almost naked now that its cloudy petticoats had dispersed.

In 1880, my protagonist had been awed by the same view and written: “It comes down out of the clouds in a succession of rounded, colossal, terrace-like projections – a stairway for the gods.”

At that moment it seemed that little had changed in the intervening 130 years.

Photos by Hamish Jackson:
1: A paddle steamer on Lake Lucerne.
2: Atop Mount Rigi near Lucerne.
3: The classy Alpentherme Spa in Leukerbad.