“Blanch your plantains!” our instructor commands in a no-foolin’-around voice. Blanch? “What does blanch mean?” I furtively whisper to Julia, my partner in this off-the-wall adventure. You see, we were cooking for our supper in Angelica’s Kitchen where our group of intrepid travelers has come for a lesson in traditional cuisine. Having already had a rather lengthy lesson in the art of knife-handling, and inhaling the ambrosial aromas wafting forth from boiling cauldrons, we looked forward to an evening that would end in a memory-making meal or – at the very least- an edible one.

A group of us, journalists all, are visiting Curacao, an island rich in history. Settled by natives of South America, in 1499 the Spanish arrived and, in 1634, the Dutch defeated them to stake their claim to the island. It is the largest and most populous of the three ABC islands of the Lesser Antilles: Aruba, Bonaire and Curacao. It is under 3 hours flight time from Miami and a mere 35 miles north of Venezuela. 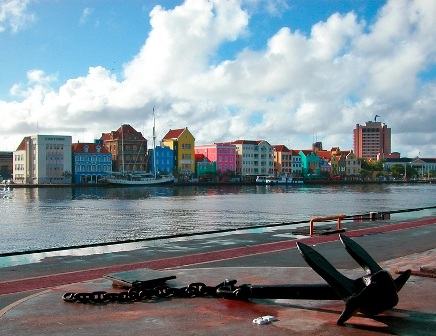 What makes Curacao unique and special among the Caribbean islands? Naturally there’s the transparent turquoise sea, the soft white sand, the ubiquitous palm trees swaying in the breeze. So, the difference? In a word: Authenticity. And, accomplishing the seeming impossible, Curacao still feels undiscovered, almost like an exclusive hideaway that only you were smart enough to find. It has a heritage both European and African. Spanish, Dutch, British, African and Jewish settlers have each added their own distinct flavor and today more than 50 nationalities are represented here. On my visit I heard a profusion of languages and islanders frequently greeted us with a lusty Bon Bin! which means welcome in Papiamentu, the local language.

We took a tour of Willemstad, Curacao’s capital city and a UNESCO World Heritage site. Row upon row of candy-colored houses – pink, green, yellow, turquoise – gave the town a pretty, fairytale look. The homes featured pitched gables, shady verandas, jalousie windows and many were covered with cascading bougainvillea, a flowering plant that’s considered good luck. In fact, on New Year’s Eve, people use the flowers to make a fragrant water to wash down their houses, thus insuring a fortuitous new year.

Orange is the new….well, Orange

At least on this day. The people of Curacao wear many bright colors but on April 30 of each year, it’s orange or nothing. The bright hue is the national color of The Netherlands and this date marks the Queen’s birthday, so Celebration Time is On! The atmosphere was festive as we danced in the street to the rhythms of calypso, meringue, tango, reggae and salsa. Although I found myself with not a stitch of orange clothing, I joined the thousands of revelers and made do with a bright, exotic orange flower stuck behind my ear. It worked.

After the swinging, hectic celebration of Queen’s Day, I awoke to the sound of the ocean softly beckoning outside my window. It was a call I had to answer, opting for a day of lazing on sparkling white sand of the iconic Avila Hotel and trying out my new snorkel gear. The water was warm as a bath and of a blue so luminous it defied description, making the view below a colorful romp with the myriad fishes that swim near the shore. Snorkeling is right up my particular alley – not scary, yet allowing me to feel I’m doing something really adventurous. However, for those of you who want to delve deeper, you should know that Curacao is a scuba diving paradise, among the best in the world with 165 dive locations, and a chance to view endangered coral reefs and ancient ship wrecks. That evening, we dined at Belle Terrace, Avila’s seaside restaurant, serenaded by a trio playing traditional island songs and sitting under a huge silver globe. Can that really be the moon? Yes, it was.

During colonial times, a good part of the merchant class that moved to Curacao was comprised of Sephardic Jews looking for religious freedom. Our tour included a visit to The Jewish Cultural Museum which housed a fascinating display of objects illustrating the customs and traditions of these early settlers and the history of a community going back hundreds of years. The museum is a part of the oldest synagogue in continuous use in the Western Hemisphere – Mikve Israel Emanuel – a wondrous building to behold.

Our stay at the Kura Hulanda Hotel was special. Our rooms were furnished with hand-carved mahogany and teak furniture and was surrounded by attractive bluestone walkways, boutiques, restaurants and sculpture gardens, all done in 18 th and 19 th century Dutch colonial style.

There are two spectacular pools, including a grotto surrounded by natural rock formations and fed by a calming waterfall. On its site is the Kura Hulanda Museum, a beautifully-curated, anthropological gem that focuses on the predominant cultures of Curacao, exhibiting the trans-Atlantic slave trade in its totality. There is a vast collection of artifacts from Continental Africa, the largest of its kind in the Caribbean. We found one of the more remarkable pieces in the museum’s garden – a standing woman sculpture, one side of her face beautiful and beguiling, and the other side displaying the continent of Africa.

Fun for the Whole Family

If you’d like to venture into a cavern, take a tour of Hoto Caves. They are open daily except Monday. Guided tours will take the family through the stalactite and stalagmite-filled rooms, several of which include pools and waterfalls.

A definite winner with the kids, the Sea Aquarium is one of the Caribbean’s finest marine exhibits. There are local fish, coral and sponges but it is the outdoor tanks with sharks, sea turtles and stingrays that really captivate. Want to swim with the fishes? At the Curacao Dolphin Academy, you can swim, snorkel and even dive with these special creatures.

Pull your head up out of that sugary white sand and take the family to the Curacao Ostrich Farm with a population of over 600 birds, one of the biggest farms outside of Africa. Kids (of all ages) are fascinated to view how ostriches live and breed.

As our Curacao travels came to an end, I’m happy to report that at Angelica’s Kitchen I did learn to blanch and, in fact, all of my cooking buddies did a great job with their assigned dishes. Cooking together, messing up, laughing a lot, making new friends, and ultimately turning out a darn good meal is an experience I’d highly recommend. Leaving Angelica’s we felt sated, convivial, and very Bon-Bini-ed – a memorable Curacao experience!

American Airlines has 5 daily flights to Curacao via Miami from as low as $154.00