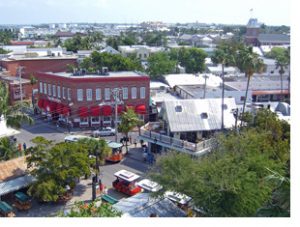 Arriving in legendary Key West just before the crimson sun slips into blue seas, we join celebrating sunset revelers at Mallory Square and all along the waterfront. While artisans peddle unique handicrafts, jugglers, zany acrobats, cats walking tightropes and fire-eaters draw gasps and applause from swirling crowds. Later, like us, many munch succulent seafood in outdoor bistros, toasting passersby with frosty drinks…

Still savoring our grilled Wahoo dinners, my hubby and I escape to the quiet comfort of our B&B. Complete with gingerbread trim and veranda, Rose Lane typifies the many white-painted heritage houses in the heart of old town. Following deluxe breakfasts served in its lush gardens next morning, we stroll lively Duval Street, commonly known for nightly bar crawls.

Here, taverns, restaurants, galleries and souvenir shops mingle with historic landmarks, including Key West’s oldest house built in 1829. Relics salvaged from the shipwrecks that made Key West the USA’s richest city still fill this home…I’m fascinated by the detached cookhouse standing out back in perfectly manicured gardens.

Nearby, a three-story mansion bears John James Audubon’s name. Ushering us along its wide veranda, guide Sophie explains, “A celebrated naturalist, Audubon was a frequent guest of master salvager John Geiger, one of Key West’s wealthiest citizens. Inside, she smiles, “These glorious antiques reveal the elegance then commonplace in prosperous homes.”

Viewing some of Audubon’s original drawings upstairs Sophie comments, “Visiting the Keys and Dry Tortugas in 1832, he sighted 18 new species for his milestone Birds of America folio.” And along garden pathways we view the cascading orchids and spiny bromeliads he’d once used in backgrounds; his white-crowned pigeon painting illustrates the same gigantic Geiger tree dominating the front yard today. 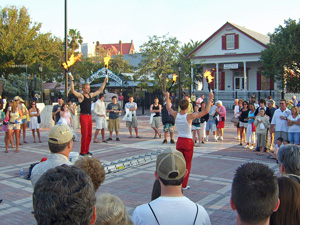 Heritage House Museum also brims with original furnishings and rare artifacts. Preservationist Jesse Porter once hosted celebrities in this Caribbean-Colonial home and Poet Laureate Robert Frost wintered in its secluded garden cottage, now named for him. Amid these luxuriant gardens we listen to his poetry, almost as if Frost himself is reading…

Curry Mansion stands out among historic houses lining Caroline Street. From a rocking chair on the veranda, the elderly concierge explains, “Starting as a penniless immigrant, William Curry soon became Florida’s first millionaire, building this magnificent home in 1855 and furnishing it from his wrecking hauls.

” Nowadays an antique-filled Inn, we explore this Queen Anne-style mansion’s 15 lavish rooms before scrambling up a steep attic ladder to the roof where we achieve spectacular panoramas from its widow’s walk.

At Shipwreck Historeum, actors portray feisty movers and shakers of the day recreating those glory days when wrecked offshore ships produced so many fortunes. Inside, recovered artifacts glitter in an ambience alive with sea-shanty music. From the 65-foot observatory, we scan the reef for wrecks, calling out “Wreck ashore!” over-and-over like captains of old.

Around the corner, we hop on the Old Town Trolley and step off at the Little White House, Florida’s only presidential museum. A guide there explains, “Officer’s quarters on the naval base were converted into Truman’s residence when he first came here in 1946 for rest and relaxation.”

The trolley next drops us off in the old Bahamian neighborhood where we join fellow literary pilgrims at Ernest Hemingway’s two-story home. Guide Bob regales us with details of Papa’s audacious life in this Spanish-Colonial mansion, where he wrote prolifically for over ten years.

“While living in Key West, Hemingway was in his 30’s…the prime of his life,” grins Bob, “and here you’ll experience his personal flare: European antiques; artifacts from African safaris; first editions of his books, even boots and saddlebags from hunting expeditions out West.” 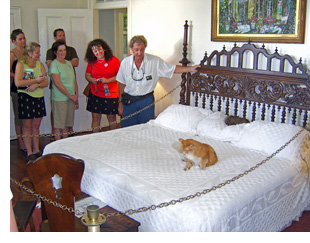 And for the departed, a feline cemetery sits in shaded gardens. Nearby, Bob identifies an unusual artifact. “Papa had this drinking fountain built for his beloved cats. On top, a Spanish olive jar from Cuba; the base, a converted urinal trough from friend Sloppy Joe’s Bar…Papa said he’d used it so often, it should be his anyway!”

Papa’s second-story studio remains intact over the old carriage house. I visualize him early each morning, slipping from his bedroom along the old catwalk above the garden.

Surrounded by his favorite mementos…still in their places…he’d be seated on his Cuban cigar-maker’s chair, pounding away on his portable Royal typewriter finishing A Farewell To Arms, a popular war story published in 1929. Here, he also wrote For Whom The Bell Tolls, among others, going on to win the Pulitzer Prize for Fiction and Nobel Prize for Literature.

“Remember, Hemingway’s Key West was unlike anywhere he’d been,” Bob reminds us. “Filled with interesting people from the very well-heeled to down-on-their-luck fishermen and wreckers, he based his fictional characters on them in To Have and Have Not, the acclaimed novel about depression-era Key West.”

And though Key West welcomed many writers over the years, none left as lasting a presence as Ernest Hemingway did…and it takes us only a few days to develop our own appreciation for Key West’s alluring past.

Photos by Rick Millikan:
1: Overview of Old Key West.
2: Mallory Square hosts a variety of performers.
3: A descendent of one of Ernest Hemingway’s cats relaxes on his bed.

If you plan to go, check out: