Story and photos by Keith Kellett 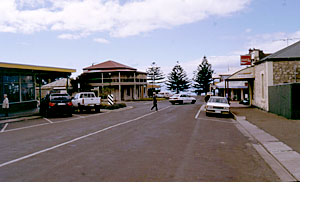 Kangaroo Island, or ‘KI’’, as it’s known locally, is more noted for what it hasn’t got than for what it has. Unlike mainland Australia, rabbits and foxes were never introduced, so the indigenous wildlife has less competition for survival.

Another thing the island doesn’t have is something a Scottish friend once called ‘The Way of the Island’. There’s no sense of being on an island; in many places, you can climb to a high point and see nothing but ‘bush’ in any direction.

That catches many visitors out, when they arrive with the idea of walking or cycling around the island. It’s really too big for that. There’s little in the way of public transport, and the only practicable ways to get around are either to sign up for an organized tour, or bring or hire a car.

If, as we did, you bring a car, it means a very early start from Adelaide, for a three-hour drive to Cape Jervis, on the southern tip of South Australia’s Fleurieu Peninsula, to catch the 8 o’clock car ferry for the 45 minute trip to Penneshaw, the island’s ferry port.

But, for those in a hurry, with transport on the island arranged, it’s only a short flight from Adelaide.

Kingscote, the island’s main town, lies on the western shore of Nepean Bay, opposite Penneshaw. Most of the older buildings in both towns have red tin roofs and shady verandas, often decorated with elaborate wrought-ironwork, giving a folksy, Norman Rockwell-ish atmosphere.

On a jetty near Kingscote, I photographed almost tame cormorants and pelicans. Penneshaw and Kingscote both have penguin burrows nearby, where Little Penguins sleep, breed and bring up their young. But, there’s little to see by daylight.

Notices around the burrows inform visitors that the penguins spend the daylight hours out at sea feeding, and only come ashore at night, when access to the burrows is only permitted in the company of a National Park Ranger.

Although we couldn’t stay until dark, I did check the burrows out anyway, as there’s sometimes a chance of finding an occasional penguin who doesn’t read notices.

Much of the island is farm land; lamb and beef from Kangaroo Island are especially prized. Fruit is also a major export … but the grapes in the vineyards are turned into very acceptable wine first.

19 National Parks and Conservation Areas cover over 30% of the island’s area, and the biggest of them lies to the south-west of the island, where the Flinders Chase National Park covers 32,600 hectares of bush-land. Entry is by permit, which we bought at the Park entrance at Rocky River.

There, we wondered if the Park authorities had the wildlife trained for we saw a family of kangaroos right in the car park by the Park office … but they only appeared after we’d paid the entrance fee! 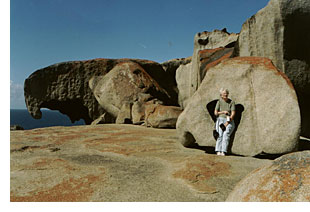 Probably the best-known feature in the Park is the Remarkable Rocks.

These are huge granite boulders on an exposed headland, which the elements have sculpted into fantastic shapes. Not far away lies Cape du Couédic, with its spectacular lighthouse standing amid weathered limestone rocks covered in wild flowers.

Nearby are the two outlying Casaurina Islets – which will become three in a few millennia, when the wave-worn Admiral’s Arch, below the lighthouse, collapses. Meantime, it offers safe refuge for New Zealand Fur Seals to bask, and be observed from a respectful distance.

On the way to the Kangaroo Island Wilderness lodge, just outside Flinders Chase, where we were staying, we called at Seal Bay to get really close up to the seals, under the supervision of a Ranger.

There were, however, no seals there, only a large colony of Australian Sea Lions. But then, few people come to Kangaroo Island just to see kangaroos … ‘You can see roos anywhere, sport!’ … so it seems fair to go to Seal Bay and not see seals. 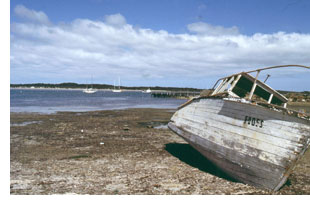 An unexpected feature is Kelly Hill Cave, a limestone grotto with a mind-blowing display of stalactites and stalagmites, including an extremely rare ‘fish-hook’ stalactite. This formation exists only in a handful of places, all in the Southern Hemisphere … and geologists are still trying to work out how it came about.

There’s lots of wildlife on ‘KI’. Not counting roadkill, we spotted kangaroos, echidnas, goannas and koalas. We missed out on the elusive platypus, though. We hiked around the pools they frequent, but were told that there was so much water in the creek from recent rains, they would be almost impossible to find.

But, that’s the way of Kangaroo Island. The wildlife isn’t going to come out and look for you; you must seek it out. And that’s the way it should be … half the fun is in the looking, and it makes the finding far more exciting.

If you’d have it any other way, you may as well just go to the zoo.

Keith Kellett is a freelance writer and photographer who makes his home in England.

The photos:
1: Kingscote, Kangaroo Island’s main town still retains its old-world
charm.
2: With nothing between them and the Antarctic, high winds have shaped
the Remarkable Rocks..
3: Settled in the 1800s by American sealers, now a resort, the American
River claims to be the oldest settlement in South Australia.