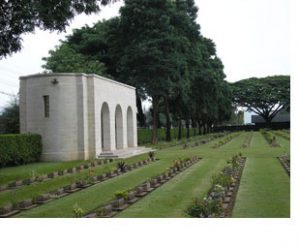 Brought up by Catholic parents to attend Sunday mass to remember Jesus’ selfless sacrifice for mankind, I felt strange that on this particular Sunday morning, I was instead visiting a cemetery in Thailand.

Places that hold the dead have always seemed eerie to me even in broad daylight, and my irrational fear was not helped by the knowledge that this was the Kanchanaburi War Cemetery, built to contain the remains of 6,982 prisoners of war who died while building a bridge of the Burma Railway for Japanese during the Second World War.

I held on to my husband’s hand as we walked through the entrance of the cemetery, pausing at the Kanchanaburi Memorial to read the names of 11 Indian soldiers buried in Muslim cemeteries across Thailand.

Despite the bright sunshine and clear weather of the morning, a somber silence hung in the air: visitors spoke in a soft whisper as they walked among the neat rows of tomb markers, sitting on a rectangular green garden bordered by low shrubs, and dotted with trees and small plants.

While most visitors spent time wandering among the section dedicated to British and Australian prisoners, my husband and I wandered to the quieter section that was set aside for Dutch prisoners.

The markers were made from the same stone and finished with a bronze plaque embedded with a gold cross detail.

Every marker revealed something about the remains buried under it: from teenagers to men in their mid 30s to 40s, and ranks from recruit upwards. However, we would occasionally come across markers inscribed only with ‘Known Unto God’.

All of them were someone’s son, brother, husband or father.

We could imagine the anguish felt by the families of these men who had ‘disappeared’ in the war. It also seemed particularly cruel that these men died in captivity without a proper burial place, and their family members could not maintain their memory in death.

We would soon realize that the markers were for those whose remains were fortunate to be identified: a sheltered pavilion standing on the left side of the cemetery had white marble panels inscribed with the names of 300 men, who died during an epidemic at Nieke camp and whose ashes are mixed in two graves on the cemetery.

After 30 minutes, we left the cemetery and spent the next 15 minutes walking in silence to the bridge standing over the river Kwai Yai, where most of the prisoners died. 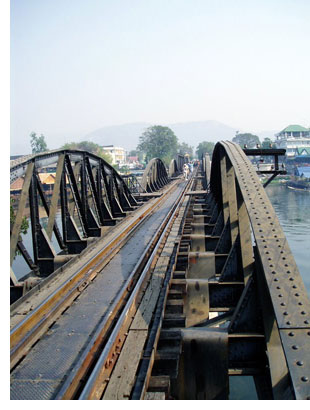 The river was renamed from Mae Klong in the 1960s, after the bridge was made famous by the 1957 movie, The Bridge On the River Kwai. The latter was based on the novel The Bridge Over the River Kwai by Pierre Boulle, set against the building of the bridge as part of the Burma Railway.

The railway, constructed from October 1942 to December 1943, was a project by the Japanese to send supplies to its army in Burma. An estimated 16,000 prisoners of war and 49,000 forcibly recruited laborers from Malaya, Siam, Burma and the Dutch East Indies worked on the construction of the railway.

It gained the moniker of Death Railway as both prisoners and laborers died during the construction or maintenance of the bridge from disease, over-work, starvation or Allied bombings.

The remains of the prisoners were buried along the lines before they were transferred after the war to three cemeteries in Thailand, one of which was the Kanchanaburi War Cemetery.

As we walked along the steel bridge that was completed in April of 1943, the river passed calmly below it. The rising morning sun brought scenic views surrounding the bridge, all of which belied nothing of its gruesome history. 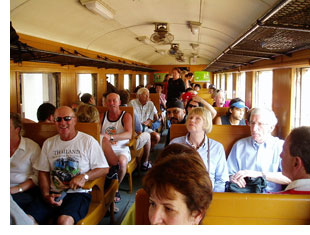 Our journey would continue further along the Death Railway, with a ride on a passenger train up to Nam Tok station, beyond which the railway line was dismantled by the State Railway of Thailand in 1947.

The unadorned train had wooden floor boards that were worn from numerous tourist feet walking through its cabins and the straight-back yellow painted wooden seats were uncomfortable. Even with fully opened windows and tiny ceiling fans whirring away, there was little respite from the thick tropical heat in the cabin of the moving train.

Our cabin was filled mainly with passengers in their 50s to 60s. Listening to the conversations among our neighboring passengers, we picked out English and Australian accents as they discussed the scenery and what they know of the Death Railway.

There were also some locals onboard hawking snacks, cold drinks and souvenir caps as the train passed through barren fields, over snaking rivers and close to mountain sides.

Suddenly, a guide shouts across the cabin: “The train is going to pass over the original wooden railway that is just up ahead. It is the only section of the entire railway that is wooden.”

Together with most of the people on the train, I popped my head out the window and prepare my camera to capture the monumental section of the Death Railway. After a few quick snaps, the cabin I was in chugged across the wooden section of the railway, bringing us safely across a deep gorge.

Many passengers would disembark from the train before its final stop at Nam Tok, where my husband and I ended our Sunday tour of the Death Railway just before noon.

It may not have been the usual Sunday mass in church but it was equally humbling and a reminder of the sacrifices these men made. They had left their country hoping to victoriously defend another nation, only to die in a foreign land with little dignity after immense suffering.

This journey will definitely leave an emotional mark on anyone, whether they had relatives that were involved in the war or not.

About the Bridge over River Kwai Yai:
The bridge spans about three miles from down-town Kanchanaburi to across the Kwai Yai river. The current bridge suffered heavy bombardment from the Allied in 1945 and was rebuilt after the war by the Japanese. The curved spans are the original sections while the trapezoid stands are the replacements.

The bridge and railway are now maintained by the State Railway of Thailand, and are part of a Trans-River Kwai Death Railway tour. A passenger train runs from Thornburi station in Bangkok to Kanchanaburi, stopping at River Kwai Bridge station before crossing the bridge and continuing on to Nam Tok station. Trains depart daily around 6.30am, 10.30 am and 4.25pm from the River Kwai Bridge station. Tickets cost 150 baht (US$4.50) per person.