From a distance it is likened to an immense iceberg glinting in the sun. As we near the edifice its appearance takes on the angular shape of four massive ship prows, each facing a different direction.

Both perceptions are befitting this monument to Belfast’s maritime history and to Titanic Belfast being the world’s most extensive Titanic experience.

On the inside we are swept up in Belfast’s industrial boom of the early 1900’s; shipbuilding being a major player. From here my husband Rick and I follow the levels that take us ever deeper into the Titanic story. To the thunder of hammers riveting steel, our cable car passes the phases of construction from her outer shell to her mega engines. Transfixed we watch old film footage of 100,000 people cheering as the Titanic slid down the Harland & Wolff slipway and settled on the waters of Belfast Lough for its maiden voyage.

In another gallery we swirl among original artifacts, replicas and imagery of opulent luxury for first class passengers, including the magnificent grand staircase. The 2nd and 3rd/steerage class quarters pale in comparison, yet no doubt were brightened by the hopes of these individuals and families emigrating to American to start a new life. Seeing the faces of passengers from rows of photos is haunting.

And how fortuitous that on display is the violin played on that fateful night by Wallace Henry Hartley, bandmaster on the RMS Titanic. Its whereabouts unknown for many years, the violin was found in an attic of a Yorkshire home in 2006, and has since undergone extensive research and forensic testing for authenticity.

Regarded as a hero in Titanic folklore, Hartley is credited with the decision to bring his orchestra of five, plus another set of three musicians onto the deck to play hymns as the Titanic was sinking on April 14th, 1912 – an attempt to calm passengers as they boarded the lifeboats. It is said they continued to play until the lurching of the vessel made it impossible to do so. The time of the ship being swallowed in total by the sea is recorded as 2:20 a.m. on April 15th. All eight men perished in the disaster – along with over 1,500 (out of the total passengers and crew count of 2,224).

The violin in a leather case with his initials W.H.H. was strapped to Hartley’s body when his remains were recovered by the crew of the ship MacKay Bennett 14 days after the disaster. Peering through glass within inches of the violin we read the inscription, “For Wallace on the occasion of our engagement from Maria” – a gift from fiancée Maria Robinson in1910. It was returned to Maria after his death. She never married and after Maria’s demise her sister donated the violin to a local Salvation Army band, from where it passed through more hands until its discovery. From Titanic Belfast it will go to public auction.

Dr. Robert Ballard’s account of his discovery of the wreckage in 1985 sends icy sensations down my spine. We stand on a glass floor while the images captured by Ballard go by beneath us, as if skimming along in a mini-submarine. Items such as the captain’s bathtub, bottles, and dishes lay scattered about. Two ladies shoes, one larger and one smaller, lie side-by-side….were they perhaps mother and teen daughter?

Outside the facility is the slipway (dry dock) where the Titanic came into being; its exact dimensions painted on the surface. We walk on what once was the length of the ship and as portrayed on a movie set (eat your hearts our Leonardo and Kate) we stand with arms outstretched on the actual spot where the bow was located!

Titanic Belfast revived and expanded our knowledge of everything Titanic, and left us deeply moved by the heroic gestures of crew and passengers during this cataclysm.

Hartley’s Violin and leather case sold for 900,000 pounds (about $1.45 million US)! No one expected the bids to go as high. The previous top sale for a Titanic item was a 32-foot plan of the Titanic used in the enquiry into the sinking, which fetched 220,000 pounds. The violin sold in ten minutes, the end bidding was between two undisclosed telephone bidders! …and is therefore lost once again to the public eye.

About the author:
Irene Butler is an award winning travel writer and author of “Trekking the Globe with Mostly Gentle Footsteps” now on Kindle. Her articles have appeared in national and international publications. She and her photographer husband Rick explore the world for six months of every year. www.globaltrekkers.ca 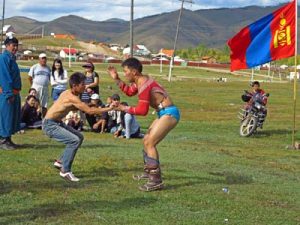