I’m standing on a bluff located deep within the Arctic Circle, wishing I could strip off my clothes. Well, some of them anyway. Expecting to be chilled to the bone, I’m wearing a thick fleece jacket, and leggings under my jeans. Flannel-grey clouds hang low in the sky, but there is no wind and, considering it is late August, the temperature is surprisingly mild.

This is Norway’s Nordkapp (North Cape) situated at a latitude of 71o 10’21” N. Although not quite the most northern point of Europe (that’s slightly west at Knivskjellodden,) it is as far north on the planet as I’m likely to go, and, like many visitors who are here today, I gleefully mark the occasion by posing in front of a monument displaying a huge sextant and globe.

Also, playing the typical tourist, I can’t resist mailing a card that will eventually be delivered to my home, bearing the postmark of this northernmost post office on the Continent.

Nordkapp, on the island of Magerøya, was, until modern times, almost inaccessible. The only ones who ventured there were rock climbers, determined to scale the steep cliff face towering 307 metres above sea level.

However, by the middle-to-latter half of the nineteenth century, it became quite the ‘in’ thing to clamber up to Nordkapp, particularly after Norway’s King Oscar II visited it in 1873.

Rugged Norwegian mountain guides carried women (hooped skirts, frilly pantaloons and all!) on hammocks strapped to their backs, all the way up to the top. Thrilling as that might have been, (particularly if the guy was a drop-dead good looking dude), I’m relieved that we can travel today in comfort along a well-paved road.

Earlier that morning, we’d disembarked from our ship, the MS Polarlys at the small fishing village of Honningsvag to board our tour bus. The journey along a two-lane highway snaked between compromisingly fierce crags, some of them covered with emerald lichen and starry white “cotton grass” flowers.

There isn’t a tree in sight along this route-a strange thing for me, accustomed as I am to our British Columbia coastal forests. Fjords, their waters glinting in the pearl-grey morning light, curl between mountain ranges with their summits wreathed in wisps of cloud.

I am struck by the harsh, brooding quality of this Arctic landscape, so evocative of an introspective Ibsen play, or one of Edvard Grieg’s haunting minor-key melodies. It is a lonely beauty, where nothing stirs except an occasional eagle riding the thermals.

But I’m wrong in thinking that the Arctic is barren of life. Hanne, our tour guide points out an island known for its population of tens of thousands of puffins: 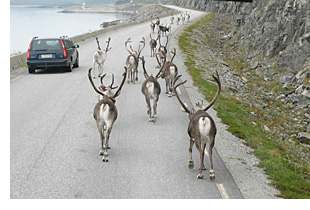 “They are chubby black and white birds with yellow parrot-like beaks,” she explains, and goes on to say that these waters are also host to guillemots, Arctic skuas and a variety of cormorants, not to mention families of seals. And then, of course, there’s the most famous four-legged inhabitant of all-Rudolph and his ilk.

We run into-almost literally-a herd of his buddies within the first half hour of our journey. The driver rounds a hairpin bend and brakes violently. Smack in front of the bus, is a gang of about fifteen reindeer sauntering along the centre of the road, unfazed by the traffic piling up behind them.

Cameras at the ready, we catapult towards the front of the bus, and grab several shots before the animals eventually trot off onto a nearby field. One of them, with an enormous brace of antlers turns his head majestically towards us, pausing as if to take a bow. His nose, however, isn’t red.

Hanne tells us, to our surprise, that reindeer in this part of Norway aren’t really “wild” animals. Although they are permitted to roam freely, the animals belong to Sami herders, the indigenous people of Finnmark-sometimes referred to as “Laplanders”. 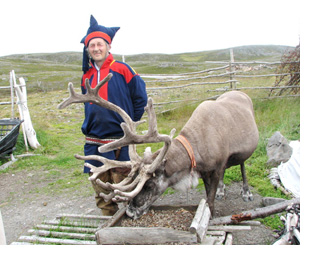 Originally the Sami were nomads, and their traditional occupation was breeding reindeer for their hides, antlers, meat and milk, and using them as sled pack animals. Today, the Sami, of Finnmark (whose cultural identity and language is now enshrined within the Norwegian parliamentary system), still herd reindeer and sell the venison to commercial outlets.

En route to Nordkapp we meet a colourfully dressed Sami and his wife, who run a small roadside souvenir shop, when not attending to their herd of reindeer. He obligingly poses for a photograph, and I take a peek into their “wigwam” style tent. It has a log fire going inside and I stand at the entrance, blinking the smoke away, while a friend obligingly clicks a shot, which she suggests should carry the caption, “Our luxury overnight accommodation in Nordkapp.”

While we’ve been on our bus tour, the MS Polarys has travelled on to Hammerfest, the world’s most northerly town, and to rejoin the ship, we spend almost four hours on the road.

It edges past slate cliffs, and burrows through tunnels which are feats of engineering. The Nordkapp tunnel which links the island of Magerøya to the mainland, for example, dives to a depth of 212 metres under the sea, and runs for 6.9 kilometres. It cost a billion dollars to construct, the cost of which is now recovered by rather expensive tolls. It is, however, far preferable to using the slower ferry system.

As we near Hammerfest, we drive past small fishing hamlets with houses painted bright red, yellow and blue. Boats lie at anchor along the shore, and every now and then the waters sheen to silver as unexpected sunbursts break through the low cloud cover: a charming finish to an unforgettable day.

About the photos by Margaret Deefholts:
1: Bus traversing the austere Arctic landscape en-route to Nordkapp (North Cape) Norway.
2: Rudolph’s buddies sauntering along the highway on their way to Nordkapp.
3: A Sami (Laplander), at his farm In Finnmark en-route to Nordkapp deep within the Arctic Circle.

Hurtigruten (Norwegian Coastal Voyage) operates a fleet of sixteen comfortable cargo-cum-passenger ships (including the HM Polarlys) through Norway’s fjords all year round. The winter voyages offer the opportunity of viewing the spectacular Northern Lights. Click on www.norwegiancoastalvoyage.ca for itineraries, costs and booking information.

Nordkapphallen (North Cape Hall) is a Visitors’ Centre on the Nordkapp promontory that offers a riveting video documentary and historical displays. Also worth seeing is the world’s oldest ecumenical chapel. On site is a souvenir shop, a post office, a restaurant, snack-bar and café. Champagne and caviar are served in the Grotten (“Cave”) bar.