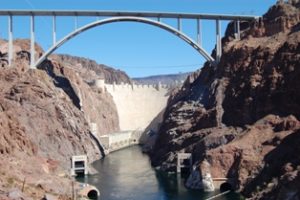 Tour guides itch only to inform.  But their cargo of facts and figures often spurs travelers to seek out what is real, what is human in a travel experience.About thirty miles from Las Vegas’ clinking slots, mercurial dice, and neon lights (looking as if a child randomly chose their colors from a pack of Crayola crayons) lies one of American’s modern civil engineering phenomena: the Hoover Dam.  In solemn contrast to glittery, glitzy Vegas — known for its oversized Egyptian sphinx hotel and a golden lion resplendently seven stories high —“The Dam” symbolizes all the best of Depression era America in a human, mortal way.

In 1931, at the height of the morale-killing Great Depression, the Colorado River was temporarily diverted, 3.5 million cubic feet of concrete were poured (enough to build a two-lane road from San Francisco to New York City), and Hoover Dam was completed by 1935, surprisingly, two full years ahead of schedule and, notably, under budget at $175 million. All these figures and facts and more, my guide (an early thirty-something with a slight resemblance to a younger, slimmer version of Roseanne Barr) does not let me forget, as she leads me proudly through the structure’s bowels. The Dam, like a giant taking a nap across a riverbed, creates Lake Mead, the largest man-made lake in America, a lake so massive that an “acre-foot” of its waters covers a football field to the depth of twelve inches.

The guide piles on more mind-numbing figures. The Dam, at 726 feet high (taller than the Washington Monument), has a base of 660 feet thick (that’s two football fields measured end-to-end).  And,  she reminds me that 85 m.p.h. waters (no highway patrol gives tickets here.) hit the turbines to generate electricity for much of Las Vegas, Los Angeles, San Diego, Phoenix, Tucson, and other American as well as Mexican communities. These turbines look mysteriously like the helmets worn by the guards surrounding Oz’s Wicked Witch of the West. All the while, as seems to be de rigueur to the trade of simultaneously guiding and entertaining the group, the guide jokes, “I usually take engineers through the Dam. So, I

play with them a bit, asking them what p.s.f. stands for. ‘Pressure per square foot, of course,’ the engineers answer me confidently. Then I ask what p.s.i stands for. They respond ‘Pounds per square inch.’  So, finally I ask, ‘And p.e.p.s.i?’ ‘Pounds equal pressure…….?’ they say and then trail off.” The guide pauses for effect and then proclaims.“It’s a soft drink!” Jokes, though, cannot lessen the burden of her avalanche-like figures and facts. So I begin to look for something human, something mortal, something vulnerable amid the substantial marvel that is Hoover. I find it. As the guide walks me through ominously dark tunnels, a sign offers an especially human warning: “Don’t take the tour if you suffer from claustrophobia.” I suspect I do.

Throughout the tour, I keep summoning my Nikon’s preview screen displaying reassuring photos snapped outside in the wide spaces of the Nevada desert sunshine. Progressing through corridors cramped for even the width of two side-by-side tourists, within the Dam, I glimpse where, over the years, engineers have left graffiti. Not hearts with lovers’ names, but the type of number-crunching notes that engineers would carve: calculations of p.s.i. on the Dam’s walls or diminutive cracks circled for future reference. Guardedly, I place my hand on the Dam’s interior.  The walls are slightly damp, like a quick drop of rain on the skin, as if the Dam, like an Arnold Schwarzenegger, is sweating under its burden.  With Lake Mead exerting 45,000 p.s.i., I would sweat, too.

At the end of one tunnel sits what might be called a ‘peep-eye’ that gazes out over the Colorado below.  Looking out, I begin to fantasize the Hoover as Tony Hawk’s ultimate skateboard park where this champion might be able to perform the famously elusive “1080″—three full aerial rotations—as he slips into the Colorado below.As the guide routes me through clever diversion tunnels, I travel between the Dam’s  levels in brass-plated elevators graced with 1930’s Art Deco designs and tread over terrazzo floors inlaid with marble chips depicting Native American art. An all-too-human attention to detail and to the nobility of art in the center of joyless concrete.

Outside, I find another human touch, making Hoover much more than a monument to practicality.  Hanging off the wall of the gift center, is a statue depicting one of the famous High Scalers. With only ropes, dynamite, pick axes, water bags, and jack hammers, the High Scalers rapelled off the canyon’s walls, sticking dynamite into excess rock to flake it off.  Then, they spidermanned away from the blasts, avoiding falling rocks and dropped tools. These High Heroes were probably responsible for designing the first construction hard hats, covering their caps with tar for protection from dropped tools and falling rocks.  Suddenly, Hoover Dam reveals a human perspective, knowing that these former sailors, circus acrobats, and American Indians, who were paid a paltry seventy-five cents an hour in depression America, helped to craft this monument.

Then, a time capsule to the future, a star chart set on the roadside leading to the Dam’s top catches my eye.  Looking out to the galaxies, artist Oskar J. W. Hansen crafted this chart showing where the stars were located on the day that the Hoover was dedicated.  Future visitors, perhaps from another world, can compare these star charts to where the stars are now to determine how long the Dam has existed.  Next to the galaxy-guiding charts is more art work: two winged figures representing the Republic (figures like the Art Deco work found in New York’s Rockefeller Center).  Thirty feet tall and weighing over four tons, these figures proclaim defiantly to the future that no ordinary men built Hoover.  It’s rumoured you get good luck when you rub the figures’ toes.  I did. The human touch continues.  A plaque on the wall near the Tour Center immortalizes the Dam’s mascot dog. Born near the barracks of the workers, he inspected every job. Each day he  received the specially packed sack lunch that he carried in his mouth as he boarded the transport to the worksite. One day, under a transport truck, the mascot was napping, as dogs do on blistering hot Nevada days.  A driver, unaware of the dog, drove over him.  To provide this touchingly loyal mascot with a fitting grave, the Dam’s workers drilled a hole in the canyon wall, overlooking Hoover. Searching for the Dam’s ominous aspect, I find a lone surviving anti-aircraft battery from World War II resting on a hill overlooking Lake Mead and Hoover.  Built right after December 7, 1941, it was supposed to protect the facility from a sneak Japanese attack—one that never came.  Standing on the hill, now, it is a stark reminder of an anxious time for all Americans.The tour is almost over. But the guide has one last fact to bestow.  She proudly declares Hoover Dam is “The People’s Dam.”  She could not be more correct. This concrete pyramid manifests its all-too-human side, mortal touches for a structure built to be immortal.