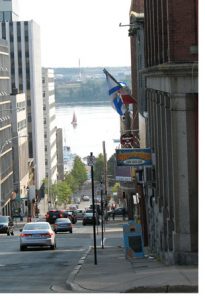 Nova Scotia smells of the Atlantic Ocean—there’s a tangy freshness to the air that is different from the pine-scented summer breezes off the Pacific coast. Even though I know that the open sea is quite a long way off, the feeling persists as I stroll the boardwalk overlooking the harbour in Halifax.

I’m heading over to what I’ve been told is the place to be on a Saturday morning: the Farmers’ Market at the historic Alexander Keith’s Brewery—reputedly the oldest farmers’ market in North America.

As I descend a flight of steps into the 19th century brick building, the central courtyard is seething with activity.

I squeeze past a little girl riding on her dad’s shoulders, and stand aside for an elderly matron striding purposefully towards the fruit and vegetable stalls. A young couple stroll hand in hand, she pausing to try out a beaded hand-crafted necklace, he stopping to take in a display of fresh fish.

Conversation rises and falls across the courtyard, while over to one side, a string quartet plays Vivaldi—the violin singing the melody of Summer from The Four Seasons perhaps a shade wistfully as this season now draws to a close. 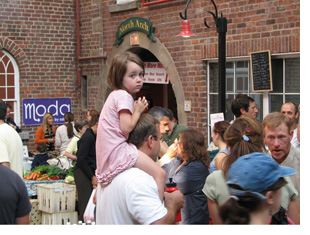 I pause now and then to put my MasterCard to work, and chat with the friendliest of merchants. “From British Columbia eh?” they exclaim. “It rains a lot there, I hear.” Or “Vancouver! Ah…that’s a beautiful city!”

Out on the street again, I make my way along the waterfront to the Maritime Museum, walking past street musicians, and kids playing in an adjacent park. The waters of the harbour glitter in the sunlight and a mild breeze ruffles the Canadian flag on the masthead of a passing sailboat.

The Atlantic has been the life-blood of Nova Scotians over the centuries and, like the ebb and flow of its tides, it has brought both prosperity and adversity to its sons and daughters. There is nothing more fitting to Halifax’s lifestyle, culture and history than the exhibits in the Maritime Museum.

Berthed alongside the Museum is the “Acadia” a retired hydrographical survey vessel built in 1913, and a white-haired gentleman with two young boys in tow is examining with keen interest the various instruments on deck. The old man then leads the youngsters to another vessel on the quay. 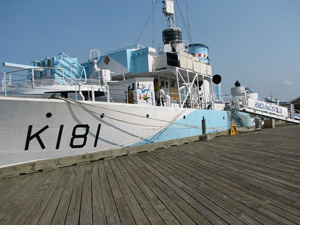 This is the HMCS “Sackville”, Canada’s last surviving vessel from a fleet of 269 gallant little corvettes that saw action in the Battle of the Atlantic during World War II. The boys nod attentively as their grandfather points out some of the ship’s special characteristics.

More than just a round up of facts, this is also an affirmation of his life as a naval officer and his years at sea—a legacy he is now passing on to his grandsons.

Halifax has had its share of tragedy, and the Maritime Museum pays tribute to the memory of people who lost their lives in the worst explosion of the 20th century (other than the atomic blast that flattened Hiroshima and Nagasaki) which took place in the harbour in December 1917.

The French freighter, Mont Blanc, loaded with 200 tons of TNT and other explosives, collided with the Norwegian vessel, Imo and caught fire. Citizens, fascinated at the sight, stood agog on the foreshore or their balconies, not knowing that this would be their last conscious spectacle as the city blew up, engulfing them in a thunderous roar of flames.

Shaped by their sea-faring life-style, Maritimers are as rugged as their coastline. Fierce winter storms, knife-edged winds and cruel seas demand tremendous reserves of courage in the face of disasters that can strike without warning or mercy.

Canada’s eastern seaboard is littered with shipwrecks engulfed by the greedy waters of the Atlantic. None is more dramatic than the sinking of the Titanic.

Two Canadian vessels, the Minia and the Mackay Bennett, retrieved 209 bodies and brought them to Halifax where, whether identified or not, they were taken to three churches.

Shocked parishioners attended memorial services, unwilling to let these unknown souls be buried alone and without ceremony. The victims were then moved to their final resting places in three Halifax cemeteries.

The disaster of the Titanic happened almost a century ago, but emotions of loss and grief aren’t altered by the passage of time, or by divisions of race or creed. It is a universal mourning that we all know and understand.

Later, as part of a city tour of Halifax, I visit the Fairview Lawn Cemetery. The headstones of the Titanic plot cast long afternoon shadows across the grassy knoll.

I am deeply moved by a small tablet which reads: “Erected to the memory of an unknown child whose remains were recovered after the disaster to the Titanic.” A miniature Raggedy Ann doll, a spray of wildflowers and a small teddy bear lie in front of the headstone—touching evidence of the sadness that continues to pervade the minds and hearts of Haligonians even to this day.

The coroner’s records subsequently revealed that the “unknown” child was actually a 2-year old toddler, Gösta Leonard who, with his Swedish mother, Alma Pålsson and three older siblings, boarded the ill-fated ship in Southampton.

The tablet is now a symbolic memorial to all those Unknown Children who perished in the waters off our Atlantic seaboard almost a century ago.

Ambassatours (Gray Line) offer an entertaining and informative 3-hour tour of Halifax which includes a visit to the imposing Citadel and a walk through the city’s Victorian Public Gardens in the wake of a skirling bagpiper. Follow the links from their website at http://www.ambassatours.com/INDEX/tabid/729/Default.aspx

For more information and upcoming events at the Maritime Museum of the Atlantic go to http://museum.gov.ns.ca/mma/events/events.html

The “Titanic: The Artifact Exhibition” is on display at the Royal B.C. Museum in Victoria until October 14th 2007. It provides visitors with fascinating insights into the stories and lives of people (some of whom were British Columbians) who perished, or survived the disaster. For more details visit: http://www.royalbcmuseum.bc.ca/titanic/default.aspx

About the photos:
1: Street view of Halifax Harbour.
2: A little girl enjoys the Halifax Saturday Market.
3: HMCS “Sackville” berthed near the Maritime Museum of The Atlantic.