Story and photos by Tom Douglas 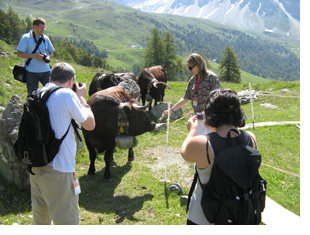 It’s not the kind of sport Ernest Hemingway would have extolled in one of his adventure novels. In fact, the macho author would probably have snickered into his margarita at the thought of attending the cattle fights in the Valais canton of Switzerland.

You see, the animals that take part in the annual “Combats des Reines” to determine the top dog, as it were, are all actually, well, girls!

Your first clue is the udders that sway with each footstep beneath the bellies of the beasts as they walk into the 5000-seat Roman amphitheatre in Martigny, the French-speaking district capital situated at a crossroads between France, Italy and Switzerland.

The wicked looking horns, the throaty bellowing and the pawing of the ground beneath the hooves of these specially bred Hérens cattle would make the casual visitor think of the running of the bulls in Pamplona or a bloody corrida between matador and El Toro in Madrid.

But instead of death in the afternoon, what you have here could best be described as a bit of pushing and shoving on a glorious fall morning. Little, if any, blood is shed and the only thing hurt is the losing cows’ feelings.

The main event takes place in early October and the owners of Hérens herds all over the canton anxiously await this final showdown of their prize cows.

The winner will be declared “Queen of the Queens” since each of the contestants in this ultimate battle have been crowned queen in regional competitions throughout the spring and summer. Champions and their calves fetch astronomical prices at subsequent cattle auctions.

This “mad cow” obsession begins each year in May when the cattle are released from their winter barns and herded up to the rich grasslands of the canton’s many alpine meadows. Cranky after being cooped up indoors for several months, the cows instinctively pick a fight with each other to see who will be the alpha female – and thus enjoy the best grazing land.

The wily Swiss have capitalized on this bovine bitchiness and hold competitions in a number of alpine villages. Townsfolk as well as breeders and cowfighting enthusiasts from afar flock to watch the tussles, bet unofficially on their favourites and wash down mounds of cheese and basketfuls of bread with flagons of local wine.

While the cows have faces only their owners could know and love, the crowd keeps track of the competitors by the numbers that are whitewashed onto their hindquarters. 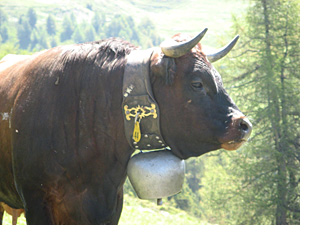 The entrants, sporting tough-guy names like Lion, Tarzan, Bandit and Turbo, fight in various classes according to their age and weight. The winners are awarded ornate cowbells the size of soccer balls, and the beast that stands her ground against all challengers is declared Queen of the Herd.

The story of the fighting cows of Switzerland literally poked me in the back while I was visiting the picturesque little village of St-Luc, about 1650 metres (5415 feet) above the town of Sierre.

I had joined a mixed bag of tourists from Poland, Germany and Bolivia on a white-knuckle postal bus ride that negotiated more hairpin turns than a hyperactive hairdresser up a mountain road to a parking lot just below the village.

Next came a brisk walk to a funicular railway that crawled its way up an alpine slope to a grassy area where a large herd of what appeared, at first glance, to be fighting bulls was grazing peacefully in a flower-strewn meadow. As we got closer, even we city slickers could tell that these animals were definitely female.

Two of our other fives senses had alerted us to the presence of the cattle before they actually came into view. Each of them was outfitted with a large bell around its neck and the combined clatter as they moved from one tasty floral patch to another sounded like all the churches in Bedlam celebrating a festival day at the same time.

In addition, the smell of the beasts on the hot summer air announced their presence with authority. 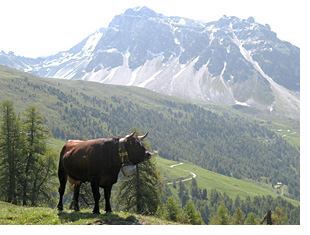 Assured by our guide that the critters were harmless, we all sauntered among them to take photos. I was focusing on one behemoth whose hindquarters had been painted with white numbers that reflected the last two digits of my birth year (none of your business) when a rather forceful nudge from behind almost knocked me off my feet.

Turning around to confront whoever it was who had pushed me – probably one of the playful Poles, I imagined – I came nose to muzzle with the largest animal I’d ever encountered. The thought of being butted in a high arc over a nearby mountain peak had me scrabbling for the high ground as fast as my climb-weary legs would carry me.

Once our guide had stopped guffawing at my antics, he recounted the story of the fighting Hérens cattle of the Valais canton, assuring me that they were docile now that they had determined the pecking (goring?) order of the herd.

But I checked my guidebook when I got back to my hotel and, sure enough, those battling cows are the “true gen” as Papa Hemingway would have put it.

Perhaps I could pay for the trip by taking in some of the championship battles staged by the fighting cattle of the Valais and writing a book along the lines of something old Ernie would have churned out (no pun intended). I already have the title: A Moo-vable Feast.

About the photos:
1: Some of the fighting Swiss cattle do lunch together among a group of photographers
2: The prize for winning one of the pushing matches billed as Swiss Cow Fights
is a bell the size of a soccer ball.
3: One of the participants in a battle for supremacy among the cattle, munches
contentedly on Alpine grass.