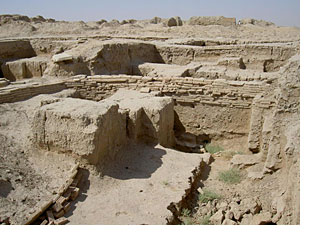 Below our Furat Cham Palace Hotel in Deir ez-Zor, Syria’s northern farming and oil capital, the Euphrates flowed in all its majesty. As I glanced on the waters of this mighty river which had witnessed the birth of civilization, I felt an emotional pull to explore its buried cultures whose history goes back to over 5,000 years.

I was thinking of Mari whose tablets told the story of humankind long before the monotheistic religions came into existence, when I heard my daughter’s voice, “Come! Our driver is waiting. I’m so excited!

I want to see the remains of our ancestors, especially the ruins of Mari.” Quickly I joined her for I too was anxious to explore these historic vestiges close to the Euphrates banks – the spots where humans had first laid the bases of our lives today.

Leaving Deir ez-Zor which had for long been considered in the backwaters of Syria but which has today, as a result of irrigation and oil, has become a booming city, we made our way eastward. 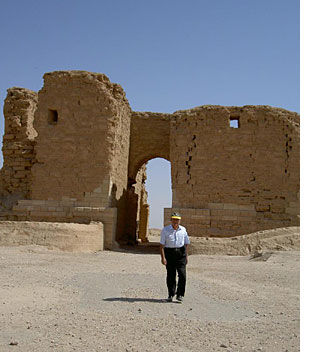 Climbing on to a desert plateau, we spotted the wind-worn walls of Doura Europos standing before us – at first sight impressive in their size. A fortified town overlooking the lush irrigated Euphrates Valley on one side and the empty desert on the other, it was once a very important economic and cultural centre in the Hellenistic, Roman, Persian and Palmyran periods.

Today, once inside, the remains are disappointing. Besides its still-standing walls and impressive entrance, little remains of the fortress-town. The most cherished relic found in the partially excavated ruins is a large well-preserved coloured mural found in the city’s synagogue – now exhibited in the Syrian National Museum in Damascus.

Down again along the fields, we soon reached Mari, known locally as Tel Hariri, some 125 km (78 mi) east of Deir Ez-Zor. Flourishing between 3000 and 2000 B.C., the city was destroyed by Hammurabi in 1760 B.C. In the ensuing years, Mari faded into oblivion and, as the centuries went by, it was totally reclaimed by the desert until discovered by André Parrot in 1933.

Mari has long been famous for its excavated mid-third millennium Sacred Enclosure – a royal palace of 300 rooms, halls with courtyards and a hall for officers, decorated with pictographs – now located in Paris’s Louvre.

However, much more has been uncovered, including the Temples of Ishtar, Ishtarat, Ninhursag, Ninni-zaza, Shamash and the Lions; the palace of Shakkanakku; a remarkable water collecting and sewage system, and 20,000 clay cuneiform tablets, dealing with administration, political life of the palace and health. Thanks to these tablets, much of Syro-Mesopotamian history is well documented. 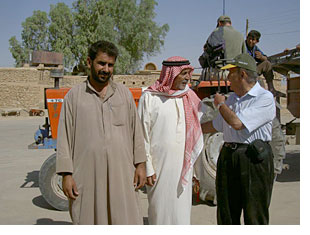 We entered the ruins in anticipation. Before us was a jigsaw puzzle of excavation sites. On a map at the edge of the covered Sacred Enclosure, we could make out some of the excavated spots. Nevertheless, it soon became apparent that, to get a true picture of Mari’s history, a guide was a dire necessity.

Group tours have their guides but if, like us, one is travelling alone a farmer’s family on the edge of the ruins, selling drinks and tickets to the site and, at times, acting as guides, is a good source of information.

As we walked away, we turned to survey the excavated spots whose plaster tiles and packed earth floors are gradually being destroyed by erosion. Yet, even though the rapid deterioration of the past is irreplaceable, in the last few decades, new methods of preservation are greatly improving the chances of saving what is left and those to be excavated in the future.

On the other hand, objects of exceptional quality found in Mari which are not in the Louvre Museum in Paris, are kept in the museums of Aleppo, Deir ez-Zor and Damascus. The finds have contributed much to Mari’s fame.

In addition to the tradition of great wall paintings, no other place in the Mesopotamian area has produced so much amulets, jewellery, pottery, seals, statuettes of goddess, kings and priests; and art objects of exceptional quality.

The site is not only a gold mine of Middle Eastern history but tells the story of humankind.

This week, Traveling Tales welcomes Habeeb Salloum, a freelance travel writer/photographer who makes his home in Toronto, ON, Canada.

Photos by Habeeb Salloum:
1: Overview of the Mari ruins.
2: Doura Europus – Gate in the walls.
3: Visitors greeting at entrance to the ruins..

Facts to Know When Travelling in Syria:

1) All foreigners entering Syria require a visa, which is best obtained from an embassy or consulate outside of Syria. Visas are valid for 15 days, but can be extended once inside the country.

2) Convert money only in banks. New exchange rates have eliminated the once thriving black market – currently $1. U.S. equals about 54 Syrian liras in banks.

3) Despite being depicted in some of the Western media as a land full of terrorists, Syria is very safe for travellers – one of the safest countries in the world. Even women travelling alone find few problems. Urban crime that plagues most modern cities is virtually non-existent in Syria.

4) For tourists in Deir ez- Zor, the Fourat Cham Palace and the Badia Cham Hotel are the only places to eat. However, if one is adventurous and doesn’t mind flies interrupting the meal, there are numerous restaurants along the Euphrates River offering barbecued meats.

5) While in Deir ez-Zor, the Deir ez-Zor Museum is a must. One of the best museums in the Middle East, it features 8,000 years of history with fantastic statues, bas-reliefs, jewellery, building implements, hunting weapons, and household utensils.

The Only Places to StayWhen travelling in Northeastern Syria:
The top places to stay in Syria are the Cham Palaces and Hotels – a deluxe chain covering the whole of Syria.
In Deir ez-Zor, the Fourat Cham Palace and Badia Cham Hotel, edging the Euphrates River are the places to stay.
For prices and for reserving rooms in all the Cham Palace Hotels in Damascus and the remainder of Syria, check http://www.chamhotels.com/syria.html .
As well, Chamtours and Chamcar Rentals cover the whole of Syria.