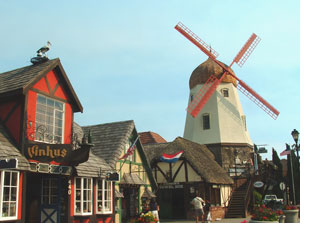 For the last 70 years, in mid-September, there has been a Danish Days celebration in the heart of California’s Central Coast. This year, number 71, the theme is “Solvang: Can You Remember When?” My husband and I have extra reasons to go this year: the return of the Viking encampment and the Pacific Conservatory of the Performing Arts (PCPA) Theaterfest performance of Urinetown the Musical, by Greg Kotis and Mark Hollman.

A short drive north on Interstate 101 from Santa Barbara, California, brings you to Highway 246. Take the easterly route from there and you will arrive in Solvang, which means “Sunny Field”.

A Danish-American colony, Solvang was founded in 1911 by a group of Danish educators from the Midwestern states. Originally, the Danish Days celebration was a small town affair for the locals, to remind them of their “roots”. When the Saturday Evening Post featured Solvang in a 1946 article, tourists began to visit, and Solvang developed into a town rich in Danish tradition.

An addition to the Danish Days celebration for the last two years has been the Ravens of Odin. A professional historical re-enactment group, the Ravens of Odin focus on the culture of Scandinavia in the Dark Ages with an emphasis on the Norse Expansion from 700-1100A.D.

This, being the third year for the encampment, will mark our second visit with them. Being long time historical re-enactors ourselves, my husband and I enjoy and appreciate the efforts of this group’s educational representation of Norse warrior/merchants as they traversed the waterways of Europe.

Because of their attention to detail, the Ravens of Odin have been encouraged by professionals from educational institutions such as the History Channel, PBS and Viking Museums in Europe.

Many of their members are craftsmen and teachers, some certified in Viking culture and history. To walk through their camp is to take a step back in time.

I look forward to seeing the on site demonstrations of woodworking, weapons making, jewelry and blacksmithing. Chain mail knitting is demonstrated and on display near the pike racks.

Visitors will be encouraged to participate in a training session of the proper mechanics of footwork, defensive positions, and sword/axe/spear tactics that were employed in the combat of the time period. 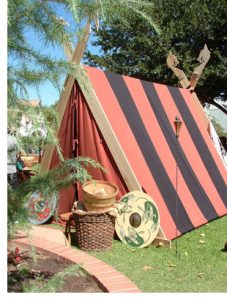 Handcrafted leather goods of Viking/Celtic design are for sale along with Viking bead jewelry at the Viking Traders Tables. I’m going to look for something to set off my eyes. I also intend to take the opportunity to observe demonstrations of weaving, sewing, and cooking and hear about herbal lore done in the context of the ancient peoples of the Nordic/Germanic ancestry.

A little closer to modern times, I look forward to “meeting” Hans Christian Anderson, portrayed by Randle McGee. As the storyteller speaks his hands are busy with a pair of ordinary scissors, cutting shapes in paper.

When he finishes a tale, Randle McGee unfolds an amazing depiction of the story cut from a single sheet of paper, much like the original Hans Christian Anderson would have done. Randle has appeared as HC Anderson at many festivals that feature storytelling.

Just a few include The Flying Leap Festival in Santa Ynez, California, Talk Story Festival in Honolulu, Hawaii, Celebration of Light Festival in Midland, Texas, the Asian Congress of Storytellers in Singapore and many others.

Other delights of Danish days include food and dancing. While costumed dancers demonstrate their prowess, I like to indulge in the traditional treats.

The Fresno Danish dancers demonstrate Scandinavian and ethnic dancing while the Fresno Great Danes play the music (no, they’re not performing dogs). One of the famous treats you’ll find plenty of is Aebleskiver.

Legend has it that Danish men originated aebleskiver in Viking days. Some say defeated Vikings used their battered shields to first make the spherical pancakes, frying them in the round dents they received in battle. Come eat your fill in the Aebleskiver eating contest.

Another pastime I enjoy is spotting the many stork figures nesting atop many of the local buildings about town. They are said to bring good luck, protecting the home owner from lightning and assuring the occupant that he/she will live long and grow rich. 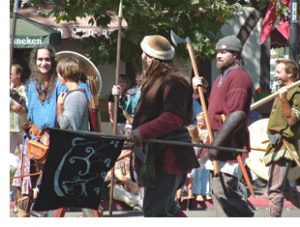 In the early afternoon, people will starting to line up along the sides of Mission Drive in anticipation of the Danish Days Parade. The parade last year was made up of the usual components of marching bands and local officials.

However, there were Viking accents to everything. Behind the local Viking Ship with participants throwing candy to the crowds were the “real” Vikings, the Ravens of Odin, charging with weapons and making a fine noise.

Something you don’t usually see in a parade was the Musical Clock Peddler with a coo coo clock built into his hat. Also, there was the Carlsberg Beer Wagon, with the Solvang Village Band on top. Bringing up the rear were the Nimbus Motorcycles. Did I mention there’s a Vintage Motorcycle Museum in town?

After seeing folk dance demonstrations, craft demonstrations and tasting delightful treats, visiting the Little Mermaid fountain and searching for the four windmills, it is time for the theater.

Acclaimed by critics nationwide, the Solvang Theaterfest offers Repertory Theater at its finest with plays presented by the Pacific Conservatory of the Performing Arts (PCPA). The 780-seat outdoor theater offers a variety of theatrical presentations from June through October each year.

When the night is through, we’ll take the drive down Highway 101, back to Santa Barbara. That is, unless we decide to stay overnight for romantic emphasis.

After all, Danish Days begins Friday evening, September 21st, and lasts till Sunday evening on the 23rd. I’m sure I can find a nice room at one of the many lodges and inns in the area.

We’ll take the whole weekend and explore the museums and countryside as well.