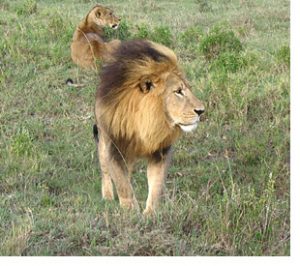 The King of Beast’s fiery mane ruffled in the breeze as he raised his head from the carrion. With a throaty rumble and a menacing glare he warned us to keep our distance. My husband, Rick and I watched him from the 24-inch viewing space below the raised roof of the customized mini-van. We were on safari – living a dream.

Having arrived in Nairobi several days ago, after booking our safari tour, we spent our time walking the streets and swirling in the sights and sounds of the city’s indefatigable rhythms.

To visit markets on the outskirts of town, we added to our grey hair by hopping a “matatu”, the infamous mini-buses driven by madmen. Our “jambo” (hello in Swahili) was met with a smiling response everywhere we went in this hospitable metropolis of 2.5 million people.

The highly anticipated day dawned. We set off down the pothole-ridden highway with our expert safari guide and driver, Joseph, and our assigned tour-mates, Heidi and Paul. With our being from Vancouver, finding out they were from Calgary gave tenor to the cliché ‘small world’.

Lake Nakuru, one of the many soda lakes in the Rift Valley, was our first stop. The algae, larvae and soda-resistant fish make it a Shangri-La for millions of water fowl.

When we first spotted the lake from a distance, a solid band of vivid pink divided the powder blue of the water and sky. As we moved closer, this band separated into a multitude of flamingos poised on one leg, scooping up the rich soupy mix alongside their pelican and stork friends.

The soft cooing of each contented bird, magnified by thousands, filled the air with a lulling hum. In the surrounding grasslands we were casually watched by a grazing herd of hefty African buffalo; some weighing as much as 800 kg. Tawny Thompson Gazelles, alarmed by our intrusion, flashed their black side-stripe and white underbelly as they dashed away.

That evening we nestled into our “no-frills” campground in Masai Mara National Reserve. A large #5 was painted on the front flap of our tent to differentiate it from its clones.

As the camp had no electricity, we were given a quick tour of the facilities before dark: two squat and two sit-down toilets, plus a ‘water-heated-in-a-drum-over-a-fire’ bucket shower. Curled up in our cots for the night, the raucous cackle of hyenas lurking outside our enclosure sent shivers down my spine.

Starting at day-break we manoeuvred the dips and twists on the dirt roads for glimpses of wildlife. A huge bull elephant swiped branches clean of leaves with his trunk. Joseph took a detour in order not to come between him and the mama with baby on the opposite side of the road.

Giraffe regally waltzed across the plains. I was mesmerized by a leopard lying in the long golden-brown grasses, so thoroughly camouflaged, that only the sunlight reflecting off his eyes gave him away.

Wildebeest were everywhere; and estimated 1.6 million of these gangly antelope migrate into Kenya in July and August and return south into Tanzania in October and November. Being September, they were now grazing compatibly alongside zebra; the ‘stripes’ being partial to the longer dry blades, while the wildebeest favour the short green under-grasses. 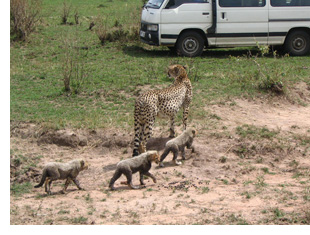 When we came across a mother cheetah and her six fur-ball cubs, Joseph’s eyes took on an effulgence of admiration. “They can reach speeds of 105 km and hour,” he said, “They’re particular about what they eat, preferring smaller game like antelope. Their kill is dragged up into tree branches where they eat it slowly instead of gorging.”

Coming back to camp each evening we were amazed at the delectable meals put together by the cook and his assistant on two small camp stoves in the 4’x 4’ kitchen hut.

As darkness fell and campfires blazed, tall lanky Masai warriors danced and chanted in their traditional dress of a shuka (red-checked blanket) tied over one shoulder, each clutching a club and spear.

In displays of gravity-defying prowess, for which Masai men are known, they took turns springing into the air to three-foot heights, piercing the night sky like arrows. A young warrior proudly displayed large earlobe piercing; a prestigious body modification in their culture.

This pastoral semi-nomadic tribe pride themselves in living harmoniously with nature. They do not slaughter their cattle, but shoot an innocuous stumpy arrow at close range into the jugular vein to drain blood, which they mix with milk for protein. They are fighting to keep their traditional way of life in spite of modern encroachment. 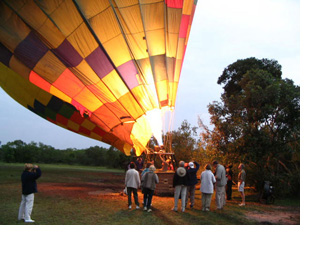 On the last day we splurged. A military jeep transported us to a 5-star resort to join a balloon safari. We stood by as hot air brought the limp balloon to life.

In silence we drifted over the savannah watching animals roam, graze, leap and hunt from our lofty perch; the tranquility broken only by intermittent fire-blasts to keep the balloon afloat. I was white-knuckled as our operator swept down to tree top level for a closer look at a rare black rhino; then dipped still lower over a snorting hippo emerging from a river.

A nearly bump-less landing brought us down near a giant acacia tree. Under its ample branches tables were spread with linen and fine china for an extravagant champagne breakfast.

Joseph took a detour on our way back to Nairobi to show us emerald tea fields and expansive coffee plantations. Stopping at an outdoor market, he said, “Just wait”, reappearing minutes later with a big grin and a gift of fresh mangoes.

Parting with Joseph, Paul and Heidi was heartfelt. We had shared many magical moments. A meld of the dynamic landscapes, wondrous wildlife, and warm friendships left us with memories as rich and glowing as an African sunset.

Photos by Rick Butler:
1: The “King of Beasts” is always a popular sight. .
2: A Cheetah leads her three cubs close to our van. .
3: Preparing for our balloon adventure.